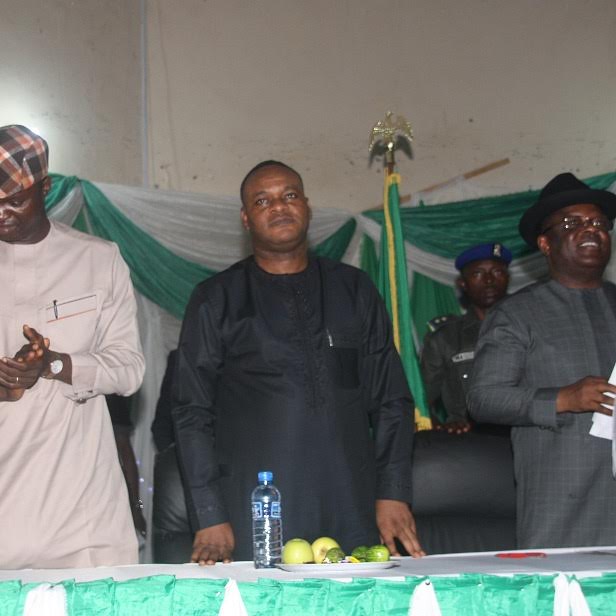 … says ‘Your men wrote petitions against us’

Ebonyi State Governor David Umahi has denied a claim by his predecessor, Chief Martin Elechi, that he headed   the Executive Council Committee on Inspection during his (Elechi) second tenure as  governor.

Umahi also dismissed  allegation  that   he was the hand behind a number of petitions before the Economic Financial Crimes Commission against Elechi and some of his children.

The governor was reacting to a  letter written to him by Elechi rejecting  a  V8 Toyota Jeep  gift he gave to him. The letter, which  was copied  the Speaker of the State House od Assembly, the state Chapter of the Christian Association and   the Department of State Security Service in the state, was leaked to the press.

But Umahi, at  an Agriculture summit organized for  clerics in  Abakaliki on Thursay, said the Exco had agreed to ignore the letter but since the former governor had decided to make it public, it was necessary to put the  facts correct.

He said, “I would not have commented on the letter of my former boss if it had not been published… We agreed in the Exco that we should ignore it but when I started seeing it published, I felt that in a public gathering like this, we have to clear some certain issues.”

The governor however explained that  he was sometimes drafted  to a monitoring team if there were engineering difficulties in some projects during Elechi’s tenure. He mentioned some of them as  the Oferekpe water project and the Agba bridge which he said  that his involvement helped to save the state a whopping N1.6bn.

He emphasized that vehicles were purchased for for former governors, including Elechi  and a former Senate President, Senator Anyim Pius Anyim.

Umahi said rejecting the car was not the best option as Elechi had written to him shortly  after he left office  to give his wife two cars which he  obliged.

He also faulted where the former governor said in the letter that  he never advised him.

His words:  “How can I advise somebody who does not take advice and never changed his mind when he says something?

“I advised him on the issue of NigerCem and the clergymen also did which by now, Ibeto would have revived the company but he refused.”

Umahi said some of the petitions that had  made Elechi a regular visitor to the  EFCC were  written when both of them  were in government as  governor and deputy governor  “by someone who is now  in his (Elechi) camp.”

Insisting  that his administration never wrote any petition against the former governor, he said he had  personally appealed to the EFCC to leave Elechi alone because of his age.

He said he also told the commission that if Elechi was found wanting in anyway, he would  pay back. He however added that Elechi’s children who were involved in contract scams would have to answer for their actions.

The governor added, “This administration has never written anything to the EFCC. I say this between God and myself. I told the EFCC that they should allow this man (Chief Elechi) some peace because he is aged. I told them that if they find him wanting in terms of money, I will undertake to be paying gradually until it is cleared.

“I said that because he is the one that brought us to leadership but not for his children. His children will answer the question on whatever they committed. One of his children is accused of involvement in a multi-million naira ICT project fraud. I want people to know that I was not there when the job was given to him.”

He said the contractors which the former governor said he chased out of the state were not honest  and that no sincere government would have worked with them.

Umahi  explained that the cost of most of the contracts given by the former governor were  found to have been over-inflated. This, according to him, made  his government to call  for joint measurement which made them to flee..

Umahi wondered why the former governor whom he  honestly served   as “a slave” could be harbouring ill-feelings against him.

He told the gathering  that 15 of his commissioners had been regular visitors to  the ICPC courtesy of   allegations by Elechi’s  loyalists that they embezzled billions of naira   belonging to the state.

He said he was ready to give Elechi peace and expressed his readiness and willingness for reconciliation if the former governor could approach CAN for truce.