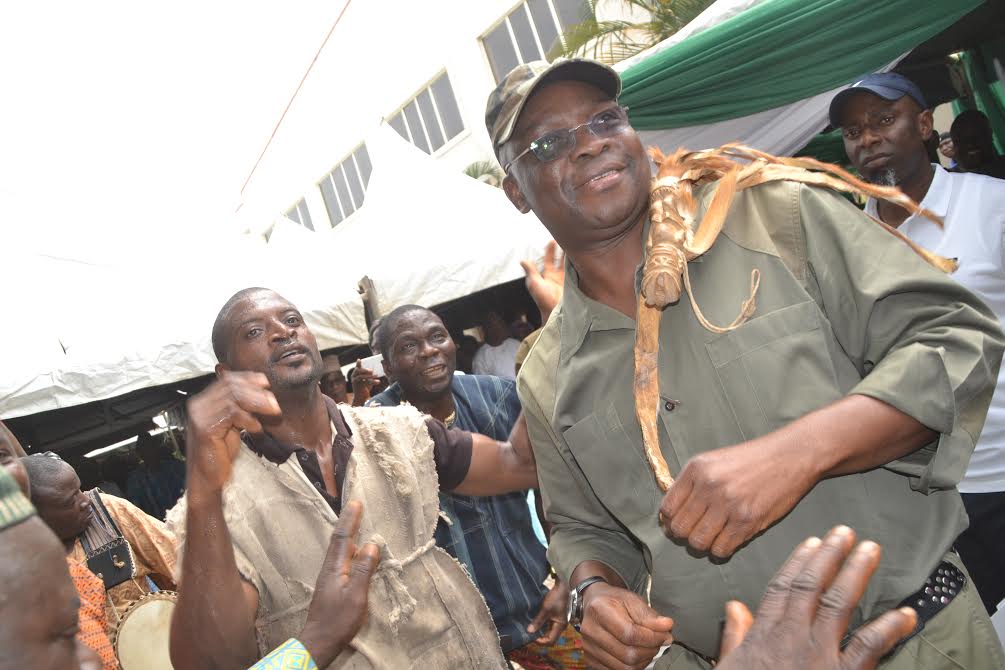 Ekiti State Governor, Mr Ayodele Fayose, today inaugurated the Ekiti
Grazing Enforcement Marshalls (EGEM), the body saddled with the
enforcement of the recently signed Prohibition of Cattle and other
Ruminants Grazing in Ekiti State Law, with a mandate to rid the State
of the menace of herdsmen and declaration that he will not sit back
and watch when Ekiti people were being killed, their wives and
daughters being raped and their sources of livelihood being destroyed
under the guise of cattle rearing.

The inauguration was witnessed by all major stakeholders in the state,
including traditional rulers, chiefs, local hunters, police, army,
civil defence, private sector unions, among others.

Read full text of Governor Fayose’s speech at the inauguration. 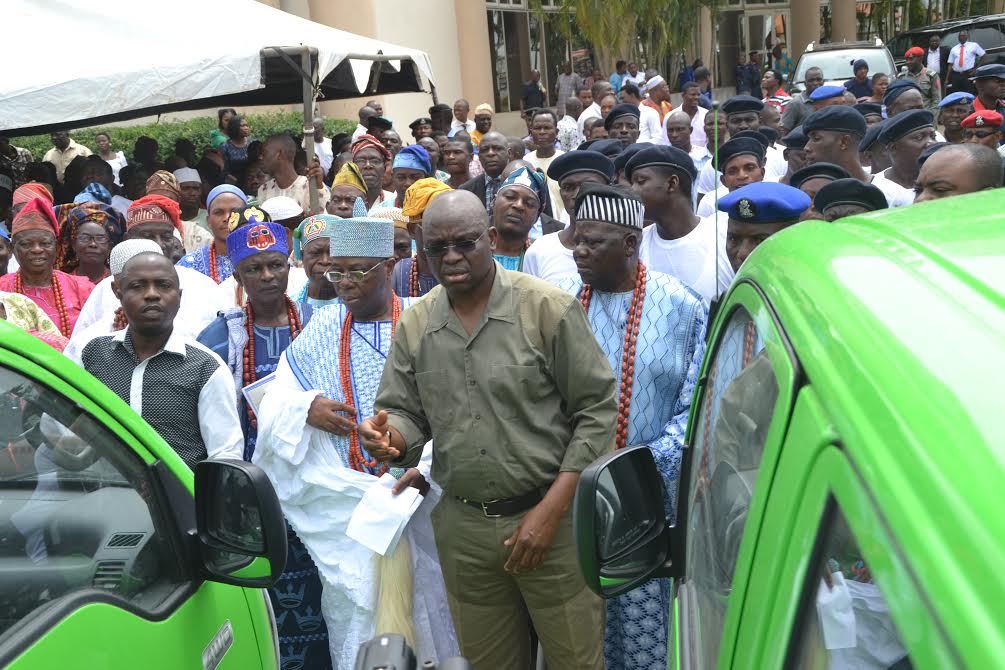 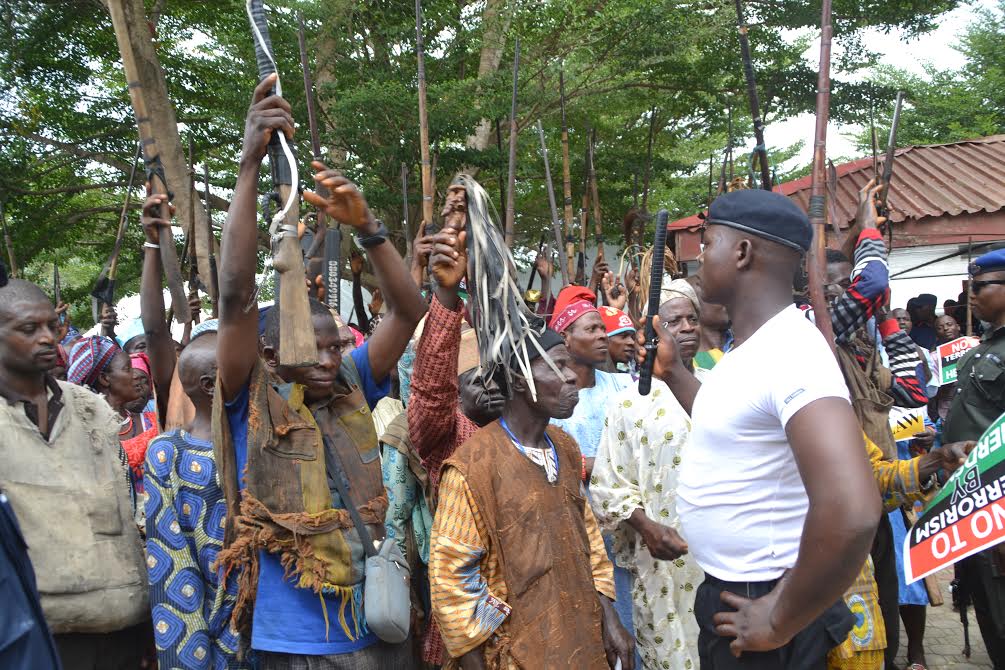 FULL TEXT OF THE ADDRESS DELIVERED BY THE EKITI STATE GOVERNOR, MR
AYODELE FAYOSE DURING THE INAUGURATION OF THE EKITI GRAZING
ENFORCEMENT MARSHALS TODAY, THURSDAY, OCTOBER 20, 2016.

Today, we have taken another bold step aimed at safeguarding the lives
and properties of the people and residents of Ekiti State by
inaugurating the Ekiti Grazing Enforcement Marshals (EGEM) and
equipping them adequately.

Recall that I signed the Prohibition of Cattle and other Ruminants
Grazing in Ekiti State Bill, 2016 into law on August 29, 2016, after
the bill was duly passed by the State House of Assembly.

The law provides amongst others that; “No person shall cause or permit
any cattle or other ruminants belonging to him or under his control to
graze on any land in which the Governor has not designated as ranches,
no cattle or other ruminants shall by any means move or graze at night
and that cattle movement and grazing are restricted to the hours
between 7:00 am and 6:00 pm.

The law also prescribed punishments for offenders, such as charging of
any herdsmen found in possession of firearms and other offensive
weapons with terrorism, payment for property or farm products
destroyed by the cattle by the herdsmen and keeping of confiscated of
cattle at Government cattle ranches.

In doing this, we opined that lives of 5,000 cows cannot be equated
with those of human beings that are being killed daily by herdsmen
across the country and it takes very timid and compromised leaders to
allow their people to be killed while they fold their arms on the
altar of politics.

Supporters and beneficiaries of open grazing have argued that cows,
like human beings have rights to move freely in any part of Nigeria
and one question I have always ask is; what happens if poultry
farmers, pig farmers, ostrich farmers or even snake farmers decide to
exercise this same rights to freedom of movement of their animals?

Imagine a situation where snake farmers also release their snakes to
the streets and other people’s farmlands to look for what to eat as
being done by cattle farmers.

The reality we must all face is that cattle farming is not different
from fish farming, snake farming, poultry farming, snail farming, etc.
Therefore, if fish farmers are providing their own ponds and poultry
farmers building their own pens, while also buying feed for their
animals, there is no reason cattle farmers should not also provide
their own ranch and feed their cows without encroaching on other
people’s farmlands.

Isn’t it even shameful that in this age that people celebrate their
city centre, we now adorn our own with cows and their dung, such that
cows are even competing space with human beings in the Federal Capital
Territory (FCT) and other cities in the country?

Therefore, here in Ekiti, if you must practice cattle farming, you do
so at designated locations.

We have taken it upon ourselves to champion this course of grazing
control because no responsible leader will sit back and watch when his
people are being killed, their wives and daughters being raped and
their sources of livelihood being destroyed under the guise of cattle
rearing.

In line with the law, any cow found destroying people’s farmlands will
be confiscated and sold with proceeds handed to people whose farmlands
were destroyed while herdsmen found with arms will face terrorism
charge.

The police and other security agencies have the duty to enforce the
Prohibition of Cattle and other Ruminants Grazing in Ekiti State Law,
2016 as well as other laws duly made by the State, by seeing to it
that offenders are arrested and prosecuted accordingly.

To complement the police and other security agencies, we have set up
the Ekiti Grazing Enforcement Marshals (EGEM), trained them and have
them well equipped. I therefore inaugurate them today and urge them to
perform their duties in the overall interest of Ekiti State and its
people.

Members of the public also have a duty to join in the crusade to free
our State from the menace of herdsmen by offering information to the
Grazing Enforcement Marshals. In this regard, telephone numbers will
be made available to the public.

Once again, I thank you for your support at all times and as your
governor, it is my duty to protect your lives and properties and no
matter the situation, I will never shy away from this responsibility.