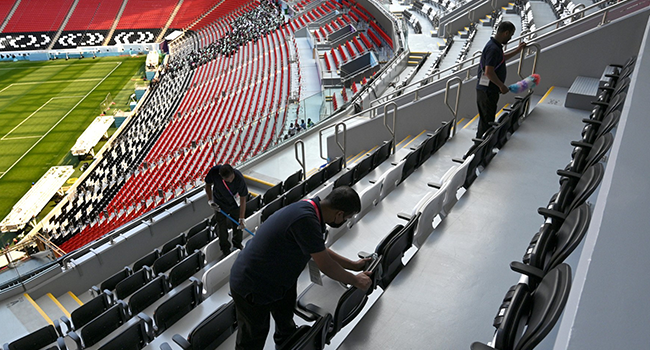 Long before the final whistle at the spectacular Bedouin tent-inspired Al Bayt Stadium, the host nation’s fans among the 67,372 crowd had started heading for the exits.

As the second half wore on, swathes of unfilled seats could be seen throughout the arena as an evening that began with joyous celebrations and heady optimism ended with a whimper.

The downbeat finale was in stark contrast to the mood in the hours before kick-off at the stadium in Al Khor, 50 kilometres (31 miles) north of Qatar’s capital Doha.

Thousands of people arrived at the vast Lusail train station where the subway line built especially for this tournament at a cost of $36 billion ends and spectators boarded a fleet of buses for the final leg of their journey.

The security forces appeared tense, aware that the eyes of the world are on this Gulf state, which many critics say should never have been awarded the World Cup.

Once the spectators arrived at the spectacular venue, camels and horses lined the road to the turnstiles.

Carlos Alvear, an Ecuadoran who lives in Ecuador, said: “It’s really special to be here. It’s the first World Cup in the Middle East, it’s historic and Ecuador is here for the opening match.

“To be honest, it’s all a bit bizarre. It’s pretty quiet, even if there are more Ecuadorans than I thought there would be. But all these buildings look pretty empty.”