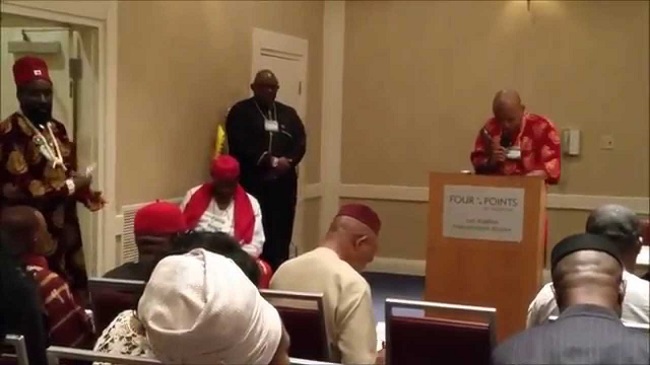 A pressure group in Enugu known as Concerned Citizens of Enugu State (CCES) has condemned the activities of the Indigenous People of Biafra (IPOB) over the continued detention of their leader and Director of Radio Biafra, Mr. Nnadi Kanu, who was arrested at the Lagos Airport recently.

The group described the recent protest by the pro-Biafra group in Enugu as illegal, unacceptable, anti-democratic and an adventure that was capable of undermining the unity of the country and the existing peace and tranquility in the state.

A statement by the group’s leader, Chief Jeremiah Udeh said: “We  Concerned Citizens of Enugu State (CCES), condemn in its entirety, the unlawful approach of violent protests adopted by the so-called Indigenous People of Biafra (IPOB) in promoting its cause. “We do not, and will not encourage any unlawful act that will be inimical to the peace and unity of the country and the tireless efforts of present administration in Enugu State to advance development in the state.”

The group regretted that “such violent protests, in the name of Biafra, at this point in time the nation is facing perennial economic challenges are not only insensitive but, also, a big distraction to governors of the South-East geo political zone whose priorities at the moment centre on how to proffer solutions to tackle current economic challenges in their states.
for the people to enjoy the dividends of democracy.

The statement noted that the governor of Enugu State is a man of peace, who would not tolerate any unlawful act that would pose a threat to the sanctity and unity of the country as an indivisible entity.

It said that there are constitutional channels the pro-Biafra group ought to have adopted to drive home their grievances rather than taking laws into their hands, stressing that such unlawful acts will not in any form add value to the collective quest of the Ndigbo for adequate integration into the mainstream of national politics and should therefore, not be encouraged.

The Enugu group therefore, warned those behind the protests to desist from such illegality and unlawful acts in the overall interest of the nation, as such actions will do the people of the south east zone more harm than good.