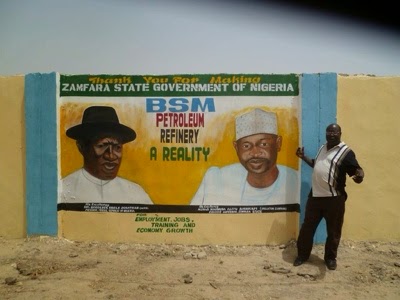 We have obtained and will be releasing documents, pictures and video evidence which portray an ugly, merit-less process with unknown agenda, by which the Nigerian government is accused of reneging after the twelfth hour and shutting down the multi-billion naira celebrated refinery project in Zamfara state for suspect reasons, destroying the investment and endangering life.

The BSM-NNPC partner refinery project commenced in 2010, promised to provide thousands of jobs. The project was well under way and had gulped over a billion euros in foreign investment. This investment was done By BSM without Government’s patronage, contracts & political affiliations and this led to its shut down among other reasons best known to the executive government of Nigeria.

Important to note, it was BSM’s detailed feasibility studies that confirmed proven reserves of crude oil deposits in Zamfara, Sokoto and Kebbi States, this was the link that gave Republic of Niger a Refinery.

The worrisome report implicates the president of Nigeria, Goodluck Jonathan, minister of petroleum resources, Diezani Alison-Madueke, Zamfara state governor Abdul’Aziz Abubakar Yari and others of trying to cover up the malicious destruction of multi billion euro investments at BSM petroleum refinery heliport complex Gusau, Zamfara state, which created jobs, employment and training opportunities for thousands of Nigerians under the governor Mahmuda Aliyu Shinkafi led administration, a governor with a clean record and projects and aspirations for true development of his state and Nigeria at large.

The BSM refinery project promised to make fuel available to Nigerians as low as N60/liter which will expose and deprive the cabal. Goodluck led Federal Government it is believed was never interested in refineries and refined petroleum products reaching the people at Naira 60 and as such terminated this contract that was outside his crew of controlled cabal.

There have been serious allegations of several kidnap and assassination attempts  on the life of Otunba Lateef Lai Ogungbadero, the chairman Board of directors of BSM to destroy evidence and the quest for justice.

The total investment in the project was one billion five hundred million Euros which was supported by Advance Payment Guarantee Bond issued by a Foreign Consortium in favour of BSM Int’nal Petroleum Refinery & Petrochemicals Limited and NNPC. This was approved and duly ratified by Zamfara State Executive Council.

Video of BM commissioning, August 29, 2010 by Governor of Zamfara

BSM holds all the requisite MOUs to the effect. The Ambassador of the Federal Republic of Nigeria to Romania also sent confirmation of the participating companies to the Federal Government of Nigeria; NIPC, NNPC, IGP, SSS: EFCC, NCAA: FAAN: NSCDC: Ministers of Petroleum Resources: Aviation: Police Affairs: Niger Delta.

BSM claims it was hounded for refusing to comply with corrupt advances of the nation’s Leadership. We have documentation and pictorial evidence of the submission of 200,000 BPD BSM Petroleum Refinery & Petrochemicals Project to the GMD & Management of the NNPC by Governor Mahmuda Shinkafi and Management of BSM Consortium.

The BSM consortium which is aggressively seeking to recuperate its lost investment funds is filing with the Jonathan government to fulfill the Advance payment Guarantee Bond. The BSM debacle has so far been a serious embarrassment to the Jonathan administration and is effectively discouraging foreign investors who depend on stability and reliability.

The official letter is  attached below.

Noted and in our further revelations, we recollect that thousands of  weapons were found to have been imported by the current governor of Zamfara, Abdu;’Aziz Abubakar Yari, but after these were seized, he was never investigated for terror links.

The BSM consortium had issued a strong worded communique on 11th Day Of June, 2014:

The undersigned on behalf of BSM Consortium hereby use this medium to channel our grievances to the World Leaders, International Business Community and Friends of Nigeria, to as a matter of urgency unite against this impious, self serving and politically motivated act of INJUSTICE.

Consequently, we advise the Federal Government of Nigeria to save Nigeria the embarrassment associated with a global outcry from an International disposition to which the forthcoming World Press Conference Tagged “UNVEILING THE POTENTIAL CHALLENGES AND RISKS OF INVESTING IN NIGERIA – THE BSM EXPERIENCE IN ZAMFARA STATE” seeks to depict.

We enjoin all our Sympathizers in Nigeria and Zamfara State in particular to remain resolute in condemning the gross act of political impunity and economic sabotage of our leaders evident in the malicious destruction of BSM Petroleum Refinery Heliport Complex next to the NNPC Depot Gusau and BSM Consortium Head Office Complex in Gusau, Zamfara State which has since deprived staff of numerous training opportunities thereby rendering them unemployed. Whilst thanking all our Partners across the globe for their immense support, patience and understanding at these difficult times.

The World Press Conference is to admonish the minds of International corporate organizations and potential investors in Nigeria to be guided without prejudice by the dilemma of BSM INT’NAL PETROLEUM REFINERY & PETROCHEMICALS LIMITED – an indigenous company with affiliations to Global Multinationals which facilitated economically viable initiatives and Integrated solutions; tackling the deficit issues bedeviling the Northern region in 2009 under the purposeful leadership of the then Executive Governor of Zamfara State His Excellency ALHAJI MAHMUDA ALIYU SHINKAFI (DALLATUN ZAMFARA) who on behalf of Zamfara State Government of Nigeria executed a Memorandum of Understanding/Agreement. This was duly ratified by the Zamfara State House of Assembly and Zamfara State Executive Council. Consequently, this project was launched in a Ground Breaking Ceremony attended by His Excellency himself.

The Infrastructural Development and Economic Emancipation Initiative of BSM Consortium was intercepted and brought to an abrupt end by some selfish and unscrupulous miscreants who by way of ethnic, religious and political divides launched various attacks on the Chairman Board of Directors OTUNBA LATEEF LAI OGUNGBADERO ranging from failed kidnap to assassination attempts. These dastardly acts were ordered by the incumbent Executive Governor, in collaboration with Leaders who claim dominance to the region of the country, deciding who invests in it regardless of Due Process, good Practice of international standard, Morals and the provisions of the Federal Republic of Nigeria Constitution.

In conclusion, we wish to emphasize unequivocally that we are nonpolitical and operate across regions without prejudice to any association or institution. Therefore, the proposed World Press Conference is not intended to jeopardize the concerted efforts of this administration in encouraging Foreign Direct Investments in Nigeria. Rather, it is intended to serve as a caveat to investors by showcasing the inherent danger associated with investments of this nature in a country where the Government lack the concomitant protection for investors.

It is our hope that the government will look beyond International road shows, long speeches, warm handshakes etc. and have a RETHINK in the forthcoming World Press Conference.

Thank You And God Bless You All!!!

For And On Behalf Of 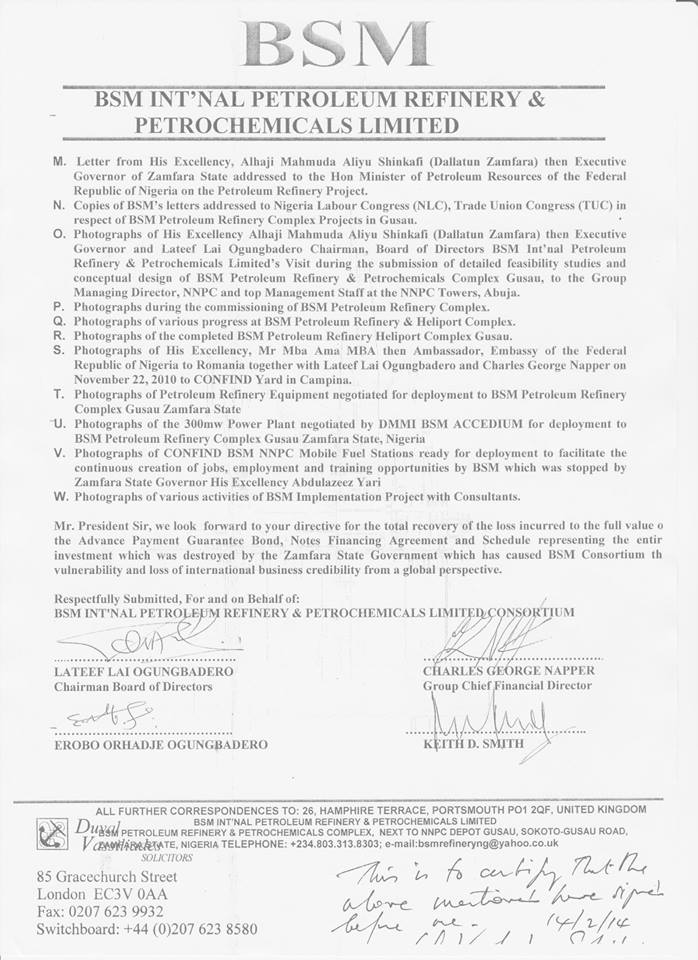 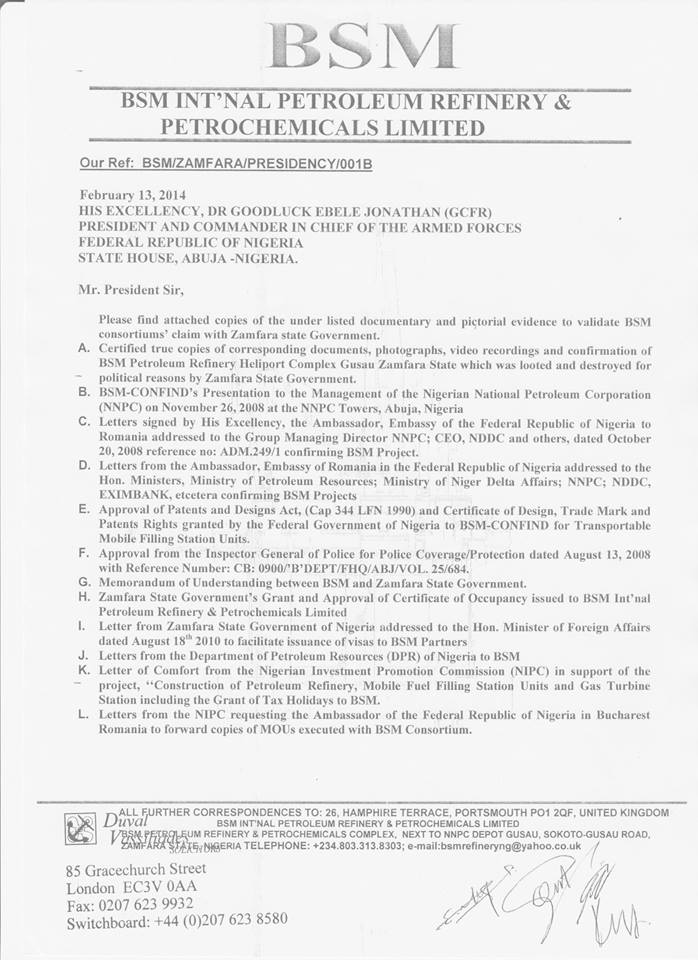