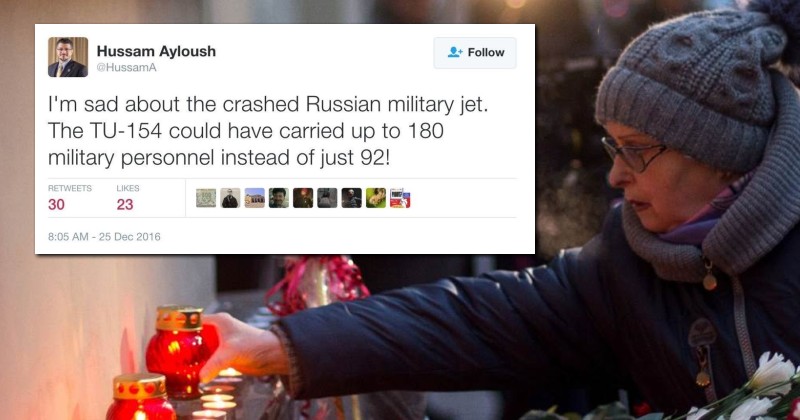 He later deleted the tweet after discovering that civilians also died

Re my recent post on the crashed Russian military jet:
I regret that my anger & emotions over the tragic situation..https://t.co/iW4k2wlyQg

I regret that my anger and emotions over the tragic situation in Syria got the best of me. And I am not ashamed to admit my mistake. My tweet was wrong and I sincerely apologize to those hurt by it, especially the families and loved ones of the innocent people who died in the crash.

I wrote that post (shown below) before finding out that civilians were on the military jet that crashed on its way to Syria. Once I found out that among the victims there were many noncombatants, I felt really bad, then deleted and retracted this post on Twitter. (I’m leaving the post here for the sake of clarification).

While Russia’s military is engaging in major war crimes and atrocities against innocent civilians in Syria, I, as a Muslim and a survivor of a civil war, would never condone/tolerate the death of Russian or any other civilians. That was also my position when the Russian ambassador was killed in Turkey. Every human life is sacred. If anything, Russians are also victims of this war forced on them and Syrians by Putin.
——
Original Post:
I’m sad about the crashed Russian military jet. The Tu-154 could have carried up to 180 military personnel instead of just 92!

Every Russian soldier who doesn’t make it to Syria translates into Syrian civilian lives being spared.
And it goes without saying, any innocent passenger on that flight is another sad victim of Putin’s genocidal war in Syria. My position has always been to unequivocally not condone or tolerate the death of any non-combatants, including Russians. Putin has forced his murderous war on innocent people in Syria and Russia alike.