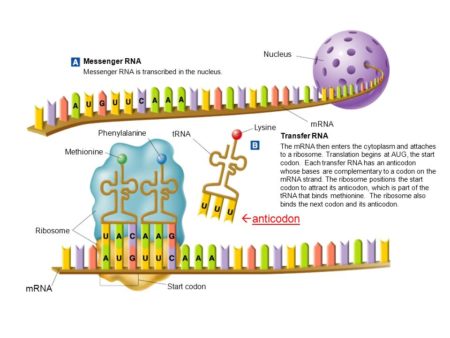 Even though scientific evidence proves otherwise, same claims are repeatedly brought up by Darwinists. This is one of the methods used to keep the Darwinist ideology alive. As a matter of fact, scientific developments over the years, even if unintentionally, have forced Darwinist circles to accept the impossibility of the formation of DNA and protein molecules by chance. This kind of formation is not possible without the cell and the required proteins existing at the same time.

The right thing to do in this situation is to accept the scientific facts and declare the invalidity of Darwinism; however, on the contrary, with a last ditch effort, Darwinists brought the “RNA World” hypothesis up for debate once again. In this article, the invalidity of the aforementioned hypothesis will be recalled and it will include vital information about RNA.

What Is “RNA World” Hypothesis?

In the 1970s, the discovery of the fact that the gases contained in the early atmosphere of the world proved amino acid synthesis impossible was a powerful blow to the theory of evolution.  It was understood that the so-called “primitive atmosphere experiments” conducted for years by such evolutionists as Miller, Fox and Ponnamperuma were all invalid. For this reason, in the 1980s, other evolutionist pursuits were developed. Consequently, the “RNA World” scenario was put forward, which suggested that the first building blocks to be formed were not the proteins, but the RNA molecules that carried the information for proteins.

According to this scenario advanced by Harvard chemist Walter Gilbert in 1986, billions of years ago an RNA molecule capable of replicating itself, formed somehow by accident. Then this RNA molecule started to produce proteins, having been activated by external influences. Thereafter, it became necessary to store this information in a second molecule, and somehow the DNA molecule emerged to do that.

Its every step being a chain of impossibilities, instead of explaining the beginning of life, this scenario actually amplified the issue. Tangible scientific facts showed that the “RNA World” hypothesis, which is just a new version of the claim that suggests life was initially formed due to coincidences, is in fact an absolutely impossible fairy tale.

Today, the “RNA World” hypothesis is supported as a last ditch effort, and a lot of essays are being published on the subject.  Among these, an essay[1]published by Horning and Joyce on June 23rd 2016, has attracted attention among evolutionists due to its claim of RNA molecules’ so-called self-replication abilities in primitive environments.

Whereas the experiment showed that RNA can only multiply in the presence of other available structures such as the RNA, ribosome, and catalyst. Besides, this multiplication is very limited and problematic. The essay never explains how a functional RNA came into existence in the beginning from nothing. Moreover, the preservation of an RNA molecule in an extracellular environment is not possible. Sunlight, heat, chemical reactions and other various energy sources cause molecules to immediately break down.

Just as proteins, RNA molecules are also folded into two or three-dimensional structures. Only the RNA that is folded into the right form is functional, and this can only be attained in the presence of the ribosomes and proteins. In their aforementioned experiment, Horning and Joyce modified an RNA based ribosome into a form that may combine some oligonucleotides, in other words, the building blocks of RNA. It was observed that these oligonucleotides that were placed into the environment in ready form by means of genetic engineering were combined and multiplied with the help of various chemical accelerators (catalysts). However, only non-functional and non-dimensional RNA molecules with very short chains were produced.

As Horning and Joyce themselves admitted in the essay, “…these self-replicating ribozymes require complex oligonucleotide substrates, which limits their ability to synthesize functional RNA molecules other than additional copies of themselves”.

First of all, there has been an external intervention performed on this experiment, and all the other elements necessary for molecular replication were provided for under laboratory conditions. In other words, those who conducted this experiment placed a modified RNA factory to the experiment setup, and provided all the required raw materials for this factory. Moreover, in order to receive desired results, they conducted the experiment many times over and they chose a special RNA molecule. However, during the real production process of RNA; there is neither RNA factory, or raw materials to be processed in this factory, nor is there an available and chosen RNA that would be sampled for production.

Regarding the supply of all the raw materials necessary for the experiment beforehand, chemist and molecular geneticist Steven Benner says, “But even if it’s correct, the chemical conditions that gave rise to the purines still don’t match those that Sutherland’s group suggests may have led to the pyrimidines. So just how A’s, G’s, C’s, and U’s [nucleotides, in other words, raw materials of RNA] would have ended up together isn’t yet clear. And … it’s still not obvious what drove the bases to link up to form full-fledged RNAs…“[2].

The RNA factory, in other words the modified ribosome, used in this experiment is a ribosome, which doesn’t contain proteins. We can also call it an intentionally distorted ribosome. Normally, ribosomes are made of various proteins and ribosomal RNA molecules. Their task is to convert the information about the RNA and protein carried by the messenger RNAs in the cell to usable products. A basic ribosome contains at least two ribosomal RNAs. For instance, one of these ribosomes the “23S” molecule is 2906 letters long, another one (28S) is 5070 letters long, and all others are at least 120 letters long molecules. The length of the letters is the sign that shows us the complexity of the RNAs, which constitute the ribosome. The RNA replicated in the aforementioned experiment is only 15 letters long.

RNA Can’t Be Synthesized Without Another RNA, And This In Turn Proves Creation

Claiming that the same scenario would work in an uncontrolled environment by using much more complex molecules than what was attained as a result of this experiment for RNA production is nothing but a delusion.  In fact, this experiment has proved that RNA can not be synthesized without the existence of another RNA. The initial RNA molecules that will enable RNA production must have come into existence at the same time with all other necessary proteins and the entire cellular systems.

Therefore, this experiment, which tries to support the “RNA World” hypothesis, is pretty similar to the Miller experiment that was debunked many times in terms of its methodology.  The Miller experiment attempted to demonstrate that proteins could be formed randomly in a specially constructed environment but ultimately failed with regard to its evolutionary claims. Because this experiment attested to the fact that amino acids could only be obtained in a laboratory setting with specially arranged conditions, and the help of conscious interference. The outcome of all these facts is clear: The power that gave rise to life is not unconscious coincidences but “Creation”.

The repeatedly brought up “RNA World” experiment has proved once again that RNAs need other RNA molecules for their synthesis, therefore there has never been an evolutionary process as all things have been created by God in their perfect form.