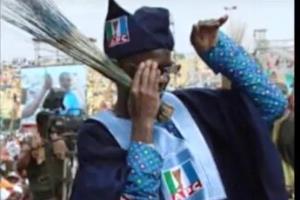 NewsRescue Comment: the Cabal prefer ‘One Nigeria’ as they are able to exploit the country as a whole with their control of politics and the center. Restructuring, and regionalism gives benefit and hope to the poor across the country.

The Minister of Works and Housing, Mr Babatunde Fashola, has expressed fears that Nigeria may experience the Brexit experience unless youths in the country are given political education to make them understand the issue of restructuring.

Reports have it that a cross-section of Nigerians has been clamouring consistently for Nigeria’s restructuring as the basis for national cohesion, progress and peaceful co-existence.

Fashola was speaking as a guest speaker at the 76th anniversary of the Island Club in Lagos at the weekend.

According to him, Nigerian youths need to be given the right political education to help them understand the issue of restructuring, to avert the Brexit experience.

Brexit refers to the decision by some people in Britain for the country to leave the European Union (EU), a choice that has thrown the country into confusion.

Fashola argued that the quest for a better life had resulted in relentless agitations by some Nigerian groups pushing diverse ideologies in their demands for restructuring.

He said that Britain was currently grappling with the problem of whether to stay in the EU or not because the youth segment of the population did not fully understand the implications of the referendum they participated in.

The minister stressed the need for adequate education of the younger segment of the Nigerian population to ensure that the right choice was made in repositioning the nation’s diversity to avoid the Brexit experience.

Fashola noted, however, that he was speaking in his capacity as a member of the Island Club and not as a member of the Federal Executive Council of the ruling All Progressives Congress. Speaking on “Restructuring: Lessons from Brexit,”

Fashola gave a detailed history of the evolution of the United Kingdom, which he said, was similar to Nigeria’s 1914 amalgamation that merged the Northern and Southern Protectorates.

He explained that the insatiable quest for a better life was the root of the clamour for restructuring in Nigeria, noting that measures to create new identities had compounded problems throughout human history.

The senior advocate of Nigeria argued that young people, who were not aware of the history of the emergence and evolution of Britain voted in favour of leaving the EU without understanding or weighing its implications, resulting to the current logjam.

He pointed out that ignorance of voters had left Britain in a difficult position of making a decision whether to leave or not, which had led to the exit of three prime ministers with no headway insight. The senior lawyer warned proponents of restructuring in Nigeria to make their definitions clear and to also educate youths on the implications of their choices to avoid retrogression in Nigeria. Fashola noted that there had been confusion in the restructuring agitation with people clamouring variously for confederation, secession, constitutional amendment and state police, among others, adding that restructuring in whatever guise must be made clear to youths.

“Let us decompose that word and let everybody be specific. There is so much confusion. Don’t hide restructuring under one word. Bring it out, so that we know what to choose.

“Where people are diverse, a federation is better. There is a great deal of work to be done by the protagonists.’’

Fashola listed countries that broke up without being able to resolve the issues of separation to include Yugoslavia, Sudan, the Soviet Union, North and South Korea, warning against agitations to split Nigeria.

The minister said there were currently 86 unresolved boundary disputes as a result of state creations in the country, explaining that the Federal Government was still building secretariats for some new states.

Fashola said that sometimes the fears of over-concentration of powers in the central government was not real, citing various processes, including budgeting that depended on other arms of government for approval. He said that the Federal Government was being blamed for all problems, ranging from education to other sectors dominated by states or the private sector.

“It licenses. It approves, sets and enforces standards but today the records indicate that there are about 165 universities in Nigeria. Forty-three belong to the Federal Government, 47 belong to State Governments and 75 are private.’’

Fashola said there were constitutional provisions already for distribution of equal opportunities, citing the 13 per cent revenue allocation for mineral producing areas as an example. The minister said that the constitution could show direction but that Nigerians must imbibe the right attitude for it to work.

“A good document not backed by the right attitude does not take people far. If anything really needs restructuring, it must start with us as people, with our attitude and with our mindset.

“Better life does not necessarily exist in a new document without a right political education; a change of attitude and an inflexible commitment to the public rule.’’

Fashola, however, supported calls for state police but stated that Nigeria missed the opportunity to have it because people did not follow up with it at various levels of government. Also speaking, a former Minister of State for Defence, Sen. Musiliu Obanikoro, said that experience had shown that “where you have injustice, humans will resist and opt for their independence”. He called for equal opportunities to remove increasing inequalities and endless agitations for a session in the country.

The Chairman of the Island Club, Mr Philip Abumere, lauded Fashola for his commitment to nation-building, citing the minister’s strides when he was governor of Lagos State.