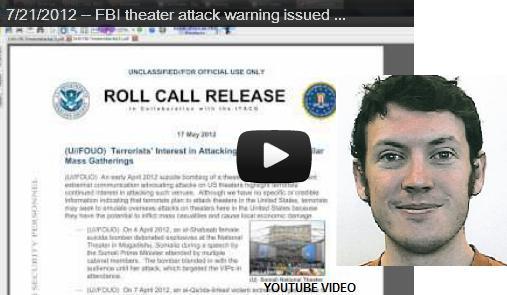 NewsRescue- The FBI /DHS (Department of Homeland Security) has been found to have released a warning on May 17th, 2012, warning US enforcement offices about terror attacks on movie theaters, the type of which occurred with the James Holmes massacre that left 12 dead and 58 wounded in Aurora, at the movie theater in Denver, Colorado.

The warning as can be confirmed below in links, google cache and video, was ‘silent’ – for the enforcement and not the general public, and was taken off the internet at some point after. It can best be described as a formal attempt at warning law enforcement and not a general public warning. Of course we all know the antics of protecting corporate business and industry by not ‘unduly’ enabling public fear.

Sometime after the attack, it appears, and after these people powered media reactions, the warning was put back online. The possible taking the warning off, after the Denver terror attack, might be due to the attacker being described as a Christian and not the usual Muslim suspects, hence confusion in the minds of the FBI as to public reactions and misinterpretations to their release.

James Holmes who purportedly claimed to be the “Joker”, Batman’s foe in the Batman movie, the screening of which was being watched in the attacked theater, was described as a steadfast Church goer, and regular at his Presbyterian Church, who hosted a Christmas party last December. The attack was thoroughly planned and his apartment was found booby-trapped.

The warning stated that terrorists may wish to emulate overseas movie theater attacks in the US.

The warning was categorized an enforcement release and not for the general public who do not have a valid need to know.

google cache of the document:

here is the original link that was taken down off google [now has been restored :^) ]

thanks to liz pressman for doing the sleuthwork!

The Department of Homeland Security in a May 17, 2012 memo, warned that American movie theaters were increasingly likely targets for terrorist attacks, primarily because they packed many people into one tightly confined place. An early April 2012 suicide bombing of a theater in Somalia and a violent extremist communication advocating attacks on US theaters highlight terrorists’ continued interest in attacking such venues. Although we have no specific or credible information indicating that terrorists plan to attack theaters in the United States, terrorists may seek to emulate overseas attacks on theaters here in the United States because they have the potential to inflict mass casualties and cause local economic damage.

Colorado police have said that the Aurora killings do not appear to be linked to terrorist activity.

This may be another case of : foot + step + manure + deep = dutchsinse

many thanks to julio rausseo for getting this information out to the community!!

be sure to subscribe to his channel linked below .. he’s broke several stories in the past few months…. and hosts a radio show from time to time (rense radio) … http://www.youtube.com/1776umphreys