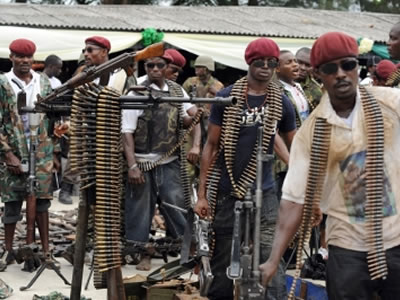 Gunmen last Friday abducted five workers at Opuama, Southern Ijaw Local Government Area of troubled Bayelsa, again reaffirming the insecurity in the State and raising doubts about the assurances of Gov. Seriake Dickson, a former policemen, concerning safety of life and property in the state.

The kidnappers are said to have established contact with the companies, demanding a N30 million ransom.

Sahara Reporters learnt that the gunmen, who arrived in a speedboat, seized their victims in the early hours of Friday and took off in the same way.

The victims were identified as employees of Beks Nigeria Limited and M. Sidom Limited, local dredging firms retained by the Niger Delta Development Commission to carry out shore protection and reclamation at the Opuama waterways.

Only three of the kidnapped men: Anukuru Godwin, Samuel Edeh and Jackson Ibani, were identified as at the time of this report.

He said that information on the crime was sketchy and promised to contact the police in Southern Ijaw.