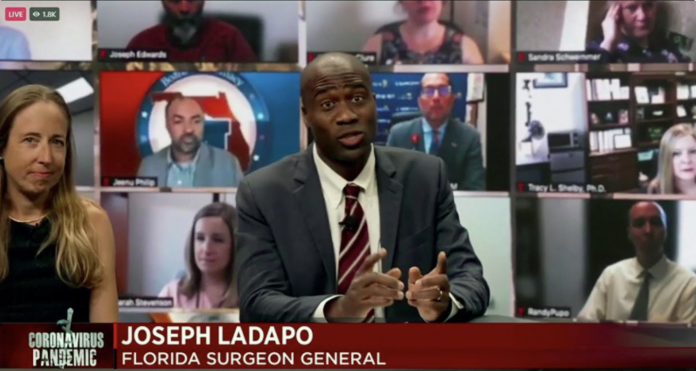 ‘The Florida Department of Health is going to be the first state to officially recommend against the COVID-19 vaccines for healthy children,’ FL Surgeon General Lapado says during roundtable discussion.’

I think a lot of people have lost confidence in the CDC,’ says Gov. Ron DeSantis.

Children should not be administered the experimental Covid-19 jab, Florida lawmakers declared Monday.

During a roundtable meeting with medical experts held by Gov. Ron DeSantis (R), Surgeon General Dr. Joseph Lapado advised parents against getting their children jabbed, saying it provides no benefit to healthy children.

“The Florida Department of Health is going to be the first state to officially recommend against the COVID-19 vaccines for healthy children,” Ladapo said.

“We’re kind of scraping at the bottom of the barrel, particularly with healthy kids, in terms of actually being able to quantify with any accuracy and any confidence the even potential of benefit.”

“If you look at teenage boys between 13 and 18 there’s been an increased signal for things like myocarditis,” DeSantis told reporters during a press conference. “You know one of the studies that was looked at to approve the Pfizer vaccine for young people found no hospitalization and death in the vaccine arm, which is good – but they found no hospitalization and death in the placebo arm either!”

The governor added the CDC’s constant flip-flops, most recently on mask rules, have caused the American people to lose trust in the institution.

“CDC with all due respect, they have not followed the science,” the governor said. “Throughout all this they’ve done a lot of political science. They’ve changed the guidance in like the last week or two with no change in underlying data – they just did it more for political purposes. And so… we are not just going to follow the CDC in the state of Florida.

The announcement, which makes Florida the first state in the nation to implement such a recommendation, contradicts current recommendations from the CDC, which advises parents to jab children as young as 5.