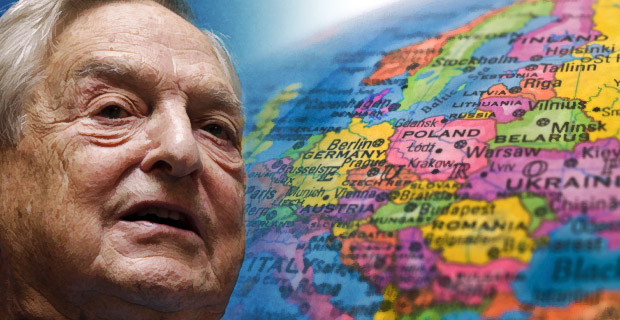 George Soros told CNN’s Fareed Zakaria over the weekend he is responsible for establishing a foundation in Ukraine that ultimately contributed to the overthrow of the country’s elected leader and the installation of a junta handpicked by the State Department.

“First on Ukraine, one of the things that many people recognized about you was that you during the revolutions of 1989 funded a lot of dissident activities, civil society groups in eastern Europe and Poland, the Czech Republic. Are you doing similar things in Ukraine?” Zakaria asked Soros.

“Well, I set up a foundation in Ukraine before Ukraine became independent of Russia. And the foundation has been functioning ever since and played an important part in events now,” Soros responded.

It is well-known, although forbidden for the establishment media to mention, that Soros worked closely with USAID, the National Endowment for Democracy (now doing work formerly assigned to the CIA), the International Republican Institute, the National Democratic Institute for International Affairs, the Freedom House, and the Albert Einstein Institute to initiate a series of color revolutions in Eastern Europe and Central Asia following the engineered collapse of the Soviet Union.

“Many of the participants in Kiev’s ‘EuroMaidan’ demonstrations were members of Soros-funded NGOs and/or were trained by the same NGOs in the many workshops and conferences sponsored by Soros’ International Renaissance Foundation (IRF), and his various Open Society institutes and foundations. The IRF, founded and funded by Soros, boasts that it has given ‘more than any other donor organization’ to ‘democratic transformation’ of Ukraine,” writes William F. Jasper.

This transformation led to fascist ultra-nationalists controlling Ukraine’s security services. In April it was announced Andriy Parubiy and other coup leaders were working with the FBI and CIA to defeat and murder separatists opposed to the junta government installed by Victoria Nuland and the State Department. Parubiy is the founder of a national socialist party in Ukraine and currently the boss of the country’s National Security and Defense Council.

Now that the billionaire “chocolate king” Petro Poroshenko is president of Ukraine, the effort to wipe out all opposition in eastern Ukraine will pick up steam. Poroshenko is a near perfect choice for the globalists and EU apparatchiks. He sat on the Council of the National Bank of Ukraine and collaborated with the IMF, Wall Street and the European Commission.

Poroshenko and the February coup leaders are now killing civilians in Donetsk as the effort continues to dislodge and eradicate “pro-Russian militants” and “terrorists,” i.e., armed resistance fighters going up against Right Sector enforcers possibly accompanied by American mercenaries with the help of the CIA. Civilians are also victims in “rebel”-held Slovyansk and neighboring Kramatorsk as retaliation against resistance to the junta in Kyiv intensifies.

The military response with its overly fascist character, including the terrorist torching of a trade union building in Odessa by “pro-regime rioters” (i.e., Right Sector paramilitaries), can be directly attributed to the activism of George Soros and the hands-on approach of the U.S. State Department, various NGOs (which are, in fact, government and Wall Street fronts), and USAID, NED, and the malattributed “Freedom House,” etc.

Following the murder and expulsion of those opposed to the IMF lording over the government and the people of Ukraine, Russia can expect further provocation, especially now that it has stepped away from supporting the resistance. The financial elite and their EU collaborators are determined to diminish and ultimately eliminate any challenge by Russia and the BRICS as these countries move to counter the neoliberal financial agenda.

“The buildup of NATO air and ground forces along the borders of Russia in eastern Europe and President Barack Obama’s American power-influencing trip to Asia have a single purpose,” Wayne Madsen wrote earlier this month. “The seen and unseen forces who dictate policy to their political puppets in Washington, London, Paris, Brussels, Berlin, and other vassal capital cities have decided to smash BRICS – the emergent financial power bloc encompassing Brazil, Russia, India, China, and South Africa.”