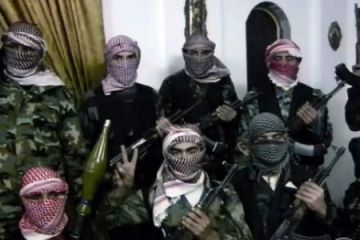 German intelligence: al-Qaeda all over Syria

German intelligence estimates that “around 90” terror attacks that “can be attributed to organizations that are close to al-Qaeda or jihadist groups” were carried out in Syria between the end of December and the beginning of July, as reported by the German daily Die Frankfurter Allgemeine Zeitung (FAZ). This was revealed by the German government in a response to a parliamentary question.

In response to the same question, the German government admitted that it had received several reports from the German foreign intelligence service, the BND, on the May 25 massacre in the Syrian town of Houla. But it noted that the content of these reports was to remain classified “by reason of national interest”, Like many other Western governments, Germany expelled Syria’s ambassador in the immediate aftermath of the massacre, holding the Syrian government responsible for the violence.

Meanwhile, at least three major German newspapers – Die Welt, the FAZ, and the mass-market tabloid Bild – have published reports attributing responsibility for the massacre to anti-government rebel forces or treating this as the most probable scenario.

Writing in Bild, longtime German war correspondent Jurgen Todenhofer accused the rebels of “deliberately killing civilians and then presenting them as victims of the government”. He described this “massacre-marketing strategy” as being “among the most disgusting things that I have ever experienced in an armed conflict”. Todenhofer had recently been to Damascus, where he interviewed Syrian President Bashar al-Assad for Germany’s ARD public television.

Wring in Die Welt, Alfred Hackensberger noted that Taldo, the sub-district of Houla where the massacre occurred, has been under rebel control since December 2011 and is in an open plain, making it unlikely that “hundreds of soldiers and Assad supporters” could have entered the village to commit the massacre. (An abridged version of Hackenberger’s report also appeared in Die Berliner Morgenpost.) Hackensberger visited Houla to conduct investigations for his report.

He also interviewed an alleged eyewitness – identified simply by the pseudonym “Jibril” – at the Saint James Monastery in Qara, Syria. In contrast to an earlier report in the FAZ, which had claimed that the victims were largely Shi’ites and Alawis, Jibril told Hackensberger that all of the victims were Sunnis “like everybody here”. By his account, they were killed for refusing to support the rebellion. Jibril added that “a lot of people in Houla know what really happened” but would not say so out of fear for their lives. “Whoever says something,” he explained, “can only repeat the rebels’ version. Anything else is certain death.”

While traveling in the region of Homs, Hackensberger heard similar stories about the conduct of the rebels. One – now former – resident of the city of Qusayr told him that not only were Christians like himself expelled from the town, but that anyone who refused to enroll their children in the Free Syrian Army had been shot. Hackensberger’s source held foreign Islamists responsible for the atrocities. “I have seen them with my own eyes,” he said, “Pakistanis, Libyans, Tunisians and also Lebanese. They call Osama bin Laden their sheikh.”

A Sunni resident of Homs told Hackensberger that he had witnessed how an armed group stopped a bus: “The passengers were divided into two groups: on the one side, Sunnis; on the other, Alawis.” According to Hackenberger’s source, the insurgents then proceeded to decapitate the nine Alawi passengers.

That the German government would cite national interest in refusing to disclose its information concerning the circumstances of the Houla massacre is particularly notable in light of Germany’s support for the rebellion and its political arm, the Syrian National Council (SNC).

While France, the United Kingdom, and the United States have figured as the most visible Western powers supporting the rebellion, Germany has been quietly playing a major role behind the scenes. According to a new report in the FAZ, the German foreign office is working with representatives of the Syrian opposition to develop “concrete plans” for a “political transition” in Syria following the fall of Assad.

John Rosenthal is a journalist who specializes on European politics and transatlantic security issues. His website is Transatlantic Intelligencer