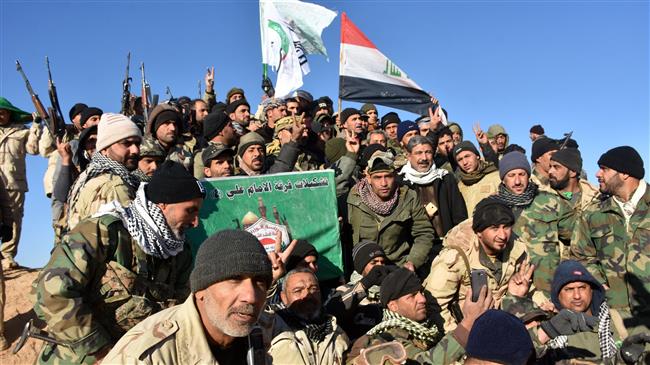 The People’s Mobilization Units (PMU) of Iraq, better known by the Arabic name Hashd al-Sha’abi, is a government-sponsored umbrella organization composed of around 40 factions of volunteer counter-terrorism forces, including mostly Shia Muslims besides Sunni Muslims, Christians and Kurds.

The PMU’s formation goes back to the summer of 2014, shortly after Daesh, the world’s most notorious terror group, showed its face and managed to occupy swathes of territory in Iraq.

The lightning gains made by the terrorists caught the national army of Iraq off guard, pushing government forces to the verge of collapse and leaving the Arab state in disarray.

On June 15 that year, Iraq’s prominent Shia cleric Grand Ayatollah Ali al-Sistani intervened to help rebuild the national army, issuing a fatwa that called on all Iraqi people to join forces with the army in the face of the Daesh threat.

The historic fatwa led to a mass mobilization of popular volunteer forces under the banner of Hashd al-Sha’abi. The force then rushed to the aid of the army and took the lead in many of the successful anti-terror operations, which ultimately led to the collapse of Daesh’s territorial rule and the liberation of the entire Iraqi land in December 2017.

The PMU’s efficient role in the Takfiri outfit’s defeat turned the force into a permanent and broadly-popular feature of Iraq’s social, political and security landscapes, despite attempts by the US and its allies to depict the PMU’s mission as sectarian in nature.

In November 2016, the parliament recognized Hashd al-Sha’abi as an official force with similar rights as those of the regular army, therefore legally establishing it as part of the National Armed Forces.

Subsequently in March 2018, the then premier Haider al-Abadi issued a decree, which said Hashd fighters would be granted many of the same rights as members of the military.

The decree added that PMU fighters would be given salaries equivalent to those received by members of the military under the Ministry of Defense’s control. PMU members would also be subject to military laws and be given access to military institutes and colleges.

“In the interest of the public good and as per the powers granted to us by the constitution … the following is decreed: all Popular Mobilization Forces are to operate as an indivisible part of the armed forces and be subject to the same regulations,” read the decree.