WITH pumping hip hop beats and electrifying dancers, Saudi Arabia has launched what’s being hailed as an entertainment revolution for the Kingdom.

Hundreds of men and women, side-by-side, hooted their appreciation and clapped to the beat as New York-based theatrical group iLuminate took to the stage in Riyadh on Thursday evening.

Anywhere else, it would have been a normal night out. But in a country without public cinemas or theaters, iLuminate’s stage show was a rarity.

That is about to change, according to the Kingdom’s General Authority for Entertainment, which has lined up WWE wrestling, Arabs Got Talent performances, a food festival, comedy, Monster Jam motor sports and other events in the coming weeks.

It is the latest sign that the sands are shifting in the desert Kingdom, where a new generation of leaders is gaining growing influence.

“This signals a new era in Saudi Arabia,” said Ahmed Al-Hemedy, 27, who watched the iLuminate show with a group of friends.

“I never expected to see something this magnificent in front of my eyes,” he said, questioning why this type of entertainment didn’t come sooner. 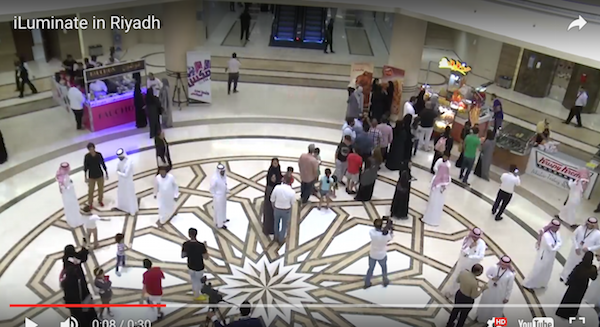 “The show was brilliant!”

The iLuminate dancers performed on a darkened stage in electrified glow-in-the dark suits, telling the stories of urban America against the thumping backdrop of its beats.

Many Saudis spend their entertainment dollars in neighboring Bahrain and Dubai.

The Kingdom outlaws alcohol, even in luxury hotels, and unrelated men and women are forbidden from mixing. That means “single” men eat in a separate section at restaurants.

But in a sign of flexibility, there was no segregation at Thursday night’s show, where men and women sat together inside the “convention hall” at Princess Noura Bint Abdulrahman University, a campus exclusively for women. Read full in SaudiGazette