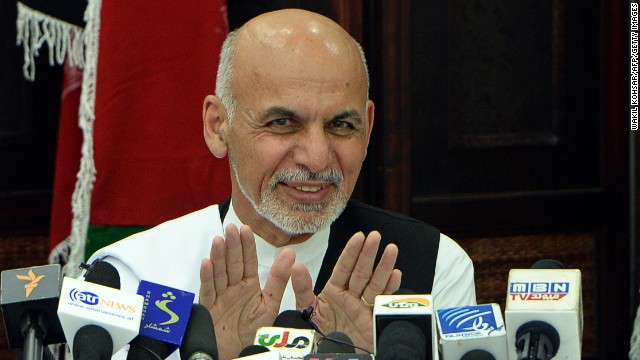 Nooristani didn’t disclose the percentage of their votes from the June runoff election. He also didn’t take any questions from journalists.

Ghani and Abdullah signed a power-sharing agreement earlier Sunday after months of infighting over allegations of voting fraud and manipulation.

The U.S. State Department congratulated both candidates, as well as the people of Afghanistan “who courageously went to the polls to vote on April 5 and again on June 14, defying Taliban threats to exercise their right to vote and to take their part in advancing democracy in Afghanistan,” according to a statement.

The lengthy dispute between Ghani and Abdullah had put off the selection of a successor to Karzai and raised fears of increased instability in the fragile, war-torn country.

But the two rivals embraced after signing a deal for a national unity government in a televised ceremony in the capital, Kabul, on Sunday.

Under the agreement, Ghani will create by decree the position of chief executive officer for the runner-up. The CEO role will have prime ministerial functions until the constitution can be amended to create a permanent position of prime minister.