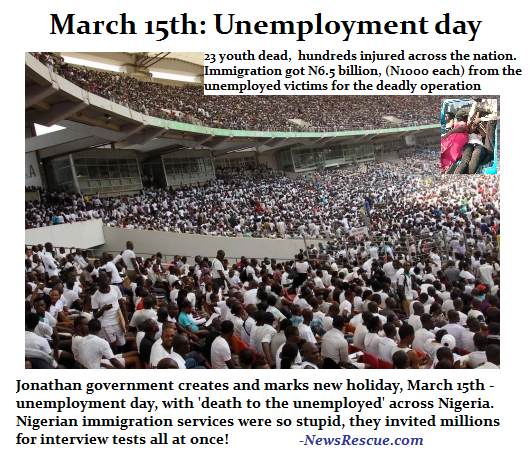 When we first read the unbelievable article in DailyTrust on February 8th this year,  which described allocations in the 2014 budget that were tantamount to “stealing from Almajiri’s;” classrooms to be built at 20 times the cost. We thought we had seen the worst. But after witnessing the tragedy in Nigeria this Saturday, we realized with this administration there must be “worstest.”

M. U Ndagi had described that in the 2014 budget, almost a billion naira, N950 million was accorded for the construction of a single block of three classrooms. This, compared to the 2012 budget for instance, where for 102 Almajiri boarding schools proposed, if you divided the total budgeted N5 billion by the 102 schools, it gave you about N49 million per school, which was to provide fifteen blocks of classrooms, dormitories, a clinic, workshops, a dining hall and teachers’ quarters in each of the 102 Almajiri boarding schools; 2014 in contrast was a whopping at least 20 times more than budgeted in 2012. A shameless path to stealing huge from the Almajiri in the so-called Almajiri Education programme.

On Saturday, March 15th, recklessness, insensitivity, greed, misrule and a policy of extortion and exploitation of the poorest masses and nation’s youth culminated in the stampede tragedy in which up to 23 job aspirants died and hundreds of Nigeria’s unemployed youth were injured. This Saturday, March 15th was a day of national tragedy and a day we are declaring the nation’s “Unemployment day.”

This was no ordinary tragedy. It was a scam, pure and simple. One more in an unlimited series of scams by a government that promotes get rich by any and all means of looting from the nation’s coffers and pockets of the poor, across all federal departments and in conspiracy with their billonaire private sector “businessmen” cabal partners.

Apart from the process of inviting all millions of candidates on the same day, being criminally ludicrous; according to Leadership today, Nigeria’s Immigration department billed each candidate N1000 ($6) for the application. A total of 6.5 million victims applied, which brings the yield to N6.5 billion, about $40 million to the immigration ministry.

The cost for the stadia used was FREE. The stadia and fields are government owned. Each sheet of paper given to each candidate was without-a-doubt, copied on tax-payers money. And for the 4000 jobs these 6.5 million victims applied for, it is well recognized that the 6.5 million papers will be tossed and never graded, and family, friends and friends of family of immigration workers will bag the jobs. Even if the papers are to be graded and recorded, all processes cannot cost more than $1/candidate and oil rich Nigeria which fails to provide its youth a single benefit should have shouldered the cost of this application process at least. But rather the leadership steals billions of dollars in so many exposed scams, and then employs its various departments to fend for themselves by plotting ponzi scams to steal billions, as was done with a few dollars ripped off each head for up to 7 million heads. A very similar scam still operational is the NNPC –Diezani kerosene subsidy scam where N100 is stolen from each mother and kerosene burner, per liter for 10 million liters of kerosene sold daily to the tune of $4.5 million/day.

We are beginning to realize that Nigeria is under a curse. These events, these tragedies, the spilling of blood, the pain, the hurt, the cheating, the corruption, the scandals, the wickedness, the insensitivity, the freeing of convicted criminals and appraisal of dead looters. This is the presentation of a serious curse. Stealing from beggars and scamming unemployed youth; these are abominations, these are acts of those possessed, under evil spirits. These things are things you see when people inherited and advanced in leadership positions after making ritual sacrifices; after burying cows and even sacrificing humans.

In addition to a youth uprising, this nation needs urgent aggressive prayers.

May the souls of the cheated youth including the pregnant wives/mothers, who departed as a result of this meaningless tragedy rest in peace; and may God give their families the strength to bear and the patience to endure. A little bit, a little while, very soon God will do something radical and great to rescue and transform this nation. He has promised that after hardship and wickedness comes relief and respite.