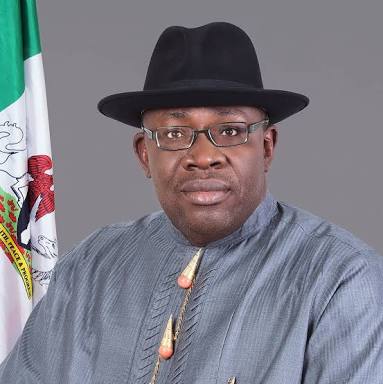 … As Makarfi Praises the Governor for service to the PDP

Following the dissolution of the National Reconciliation Committee of the Peoples’ Democratic Party (PDP),the Chairman of the Committee and Governor of Bayelsa State, Honourable Henry Seriake has held a valedictory session with the members of the committee on Wednesday in Abuja. The session which held at his Maitama Lodge was attended by almost all committee members including the former Deputy Senate President, Senator Ibrahim Mantu, former Minister of the Federal Capital Territory (FCT), Engr . Abba Gana, current serving Senator Joshua Lidan, Ambassador Umaru Damagun and BoT member Hajiya Hauwa Musa Kida. The Governor thanked them for their collaboration and dedication to duty before proceeding for a meeting with the Chairman of the PDP National Caretaker Committee (NCC), Senator Ahmed Makarfi in his Maitama residence.

Governor Dickson used the visit to once more, congratulate the PDP and particularly the NCC for the Supreme Court judgement which he described as widely acclaimed. The governor said he proposed to Makarfi the dissolution of all standing committees of the party following the Supreme Court verdict because doing so will enable the party set up new committees with fresh hands to give the PDP fresh breath especially in managing conflict and deepening reconciliation. Having been dissolved, the governor said he held valedictory session with his committee members and thought it wise to formally meet with the Chairman after winding down!

The Governor said :‘‘After the Valedictory session, I have to lead my colleagues on the committee to visit you and use this opportunity to once more congratulate and thank the party for the opportunity that was given us to serve in the capacity we served…All of us are believers in our party and we are available to serve our party in any way deemed fit in future ’’.

He called on all leaders and stakeholders of the party to support the NCC to deepen reconciliation and deliver acceptable Unity National Convention within the shortest possible time. While stressing that the court only adjudicates and does not reconcile, Governor Dickson urges the NCC and all leaders of PDP across board to embark on deliberate genuine reconciliation adding that it is by so doing that the PDP will regain its lost glory:

‘‘ All of us in the committee met and reviewed our activities and remain convinced today just as we were convinced about the work we did months back that the way forward for our party is reconciliation, reconciliation and reconciliation. The way forward is dialogue, dialogue and dialogue… The Supreme Court does not reconcile, it can only adjudicate and that is why political solution to a political problem is usually the best option in a democracy. Now that the Supreme Court and the Judiciary have done their job, we are counting on your experience and leadership with the support of all leaders to still deepen reconciliation. It is now the business of political leaders and party leaders under your leadership to build a unity strong party that will be the Horse that Warriors would ride to political battles and win … ’’

Responding, Senator Makarfi thanked Governor Dickson for serving the party dutifully and for sacrificing so much for the party in most trying times. The NCC Chairman said it was the initiative of the Governor to have all the standing committees in the party dissolved to create room for a fresh start, and commends the Governor for the foresight.

The NCC chairman said: ‘‘I want to thank you (Governor Seriake Dickson) for the tremendous service to the party, not only on the reconciliation committee but in all aspects of the party. All along, it has always been my belief that you have always been acting in good faith but there were people who were not…’’

‘‘As you will recall, we had expanded caucus, BoT and NEC and that was after I heard a discussion with you and you initiated the discussion to dissolve the standing committees out of foresight and love for the party and I communicated the initiative of yours to all the organs of the party including the NEC.’’

Senator Makarfi said he would pursue reconciliation stressing that it was against that background that he declared after the Supreme Court judgement that there was no victor no vanquished. He however said all those who had misbehaved and tried to pull the PDP down before the verdict have been pardoned, the party will however descend heavily on anybody who plays antiparty or flouts the party rules henceforth.