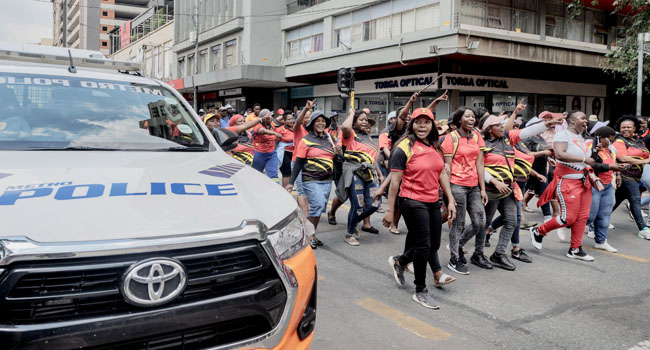 Thousands of public workers in South Africa downed tools on Thursday in a nationwide strike over wages after talks with the government hit a deadlock.

The work stoppage was led by one of South Africa’s largest labour unions, the Public Servants Association (PSA), which has more than 235,000 members. The wage stalemate between the government and its employees escalated after Labour Minister Thulas Nxesi last week declared he would unilaterally implement a three percent increase across the board.

Union members including nurses, immigration workers and some police officers picketed outside the National Treasury offices in Pretoria waving black placards reading “public servants are bleeding” and delivered a list of demands.

In Johannesburg municipal employees marched to the city mayor’s office.

“In the past two years we have been affected by Covid, food (costs are) increasing on daily basis… but you find that the same workers are still earning the same salary in the past five years,” Mish Mdlalose, a municipal worker and politician told AFP.

The PSA said the labour minister’s “irresponsible action has further damaged the already fragile relations and severe trust deficit” between government and unions.

Finance Minister Enoch Godongwana said during his October mini-budget speech that government could only afford an average wage increase of 3.3 percent.

The increase weighs below South Africa’s inflation which peaked at 7.8 percent in July