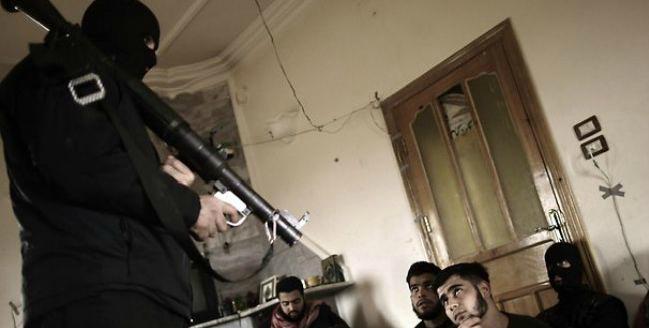 A gruesome video has emerged on the Internet, showing foreign-backed militants in Syria setting three Syrian Kurds on fire.

The video, which was posted online on Monday, shows the al-Qaeda-affiliated group al-Nusra Front militants pouring a flammable liquid on the hand-cuffed, blind-folded men who appear to be Syrian Kurd soldiers.

The militants then push the three into a fire they have made.

Press TV cannot independently verify the authenticity of the video.

Reports said that al-Nusra militants attacked Tal Abyad district of Raqqa governorate in northern Syria on Monday, killing 450 civilians. The victims were said to be women, children and the elderly.

Fighting between Kurdish militia and al-Qaeda-linked militants has been escalating in north and northeastern Syria in the past weeks after Kurdish fighters, who are opposed to foreign interference in Syria, managed to push back the militants from several positions in the area.

On July 30, a powerful Kurdish militia said it was mobilizing against al-Qaeda-linked groups in northeastern Syria following the killing of a Kurdish opposition leader in the area.

“We call on the Kurdish people… to step forward…. Anyone fit to bear arms should join the ranks of the Committees for the Protection of the Kurdish People (YPG) and to face the assaults of these armed groups,” said a YPG statement, which was released shortly after the assassination of Isa Huso in al-Qamishli.