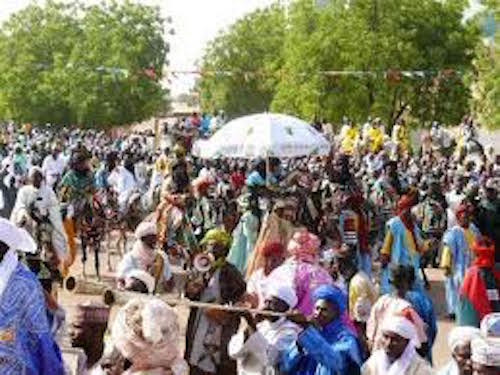 If you want to tame, culture and shape humans to submit to your culture blindly, you come as explorers, then as missionaries to show them the path to heaven and finally colonize them for political and economic gain. It works all the time, in Africa Nkrumah called it colonialism to Neo-. Once people are gripped by religion, they are ready to kill for converts. Otherwise there would be no Crusade or Jihad. Hausa are still religious zealots of Usman Dan Fodio after all the years.

If faith preachers cannot wait to get to heaven before they live in luxury on your tithes, why should you? Religious houses in every street, cramming the Koran, Bible and incarnation from our pastors, imams and babalawo are drugs on faith that cannot produce a pin, feed our hungry bellies or change water into wine. It creates jobs and wealth for those exploiting our delusions, misery, faith and hope that one day salvation would come or when we get to heaven.

Throughout the history of Nigeria, Hausa/Fulani wannabes have ruled more than other ethnic groups but their folks are the least beneficiary of basic needs. Hausa, the descendants of kings of African Empires are a good example of how radical religions stunted advancement. The good intention of Federal Character was to make sure that every area is ameliorated by national income and Federal presence. However, Federal Character has been hijacked by the privileged and the elite politicians to secure pieces of the pie for one another instead of infrastructure.

The Southerners, if the current trend of glorified pastors, imams and Voodoo men continue, are just becoming as hooked on faith as Northern Muslims. There are pastors and imams raising the dead, predicting calamity and threatening the end of the world until they establish churches and mosques on every street where tithes can easily flow into their pockets. Their believers are so overcome by persona, they are in the early stages of charlatanry as the Hausa or Kanuri boko haram in search of converts from houses on every street to establish their business centers.

Despite leadership from the North, the Hausa remained the most marginalized based on past history with the Fulani that captured their City States and replaced their Emirs with only those that can demonstrate their Fulani blood. Unfortunately, the obvious exclusion of real Hausa has gone beyond religious power and made it into political power. The hierarchy established by Usman Dan Fodio radical Islam replaced prior established Muslim and their indigenous beliefs.

Islam was not new to the Hausa, Dan Fodio brought his radicalized version displacing the one he met and more important, suppressing Hausa indigenous religion. Therefore, no head of State from the Northern part of Nigeria would be accepted without following the established hierarchy of the Fulani blood. Indeed, when he took over, General Gowon, a tactically chosen Christian, assured the Fulani indirectly by reminding them this was a Northerner in charge.

Ironically, Gowon from the Middle Belt is not even an a Fulani or an Hausa but like General Banbangida and those without Fulani blood like Gen. Abacha and Abubakar that led after him, they had to preserve the legacy of Fulani blood in their appointments. While Southerners decried the lack of Federal Character in appointments, Northerners did not care since they have to answer to established norm prevailing after the Hausa lost their City States to Dan Fodio.

One would expect the Hausa to be better off than the rest of the ethnic groups in the North or South but not even the Federal Character could save them from Fulani religious hierarchy. The amount of funds supporting Federal Character individually deprived most communities of basic infrastructure. They end up as talikawa and some as beggars all over the Country.

The Southerners now have their own Dan Fodio competition in the miracles of pastors, imams and Voodoo men. Before pastors, imams and medicine men established themselves as the only way to salvation and the means of acquiring wisdom in the South, Hausa and most Northerners were just as fanatically glued to the teaching of their spiritual leaders that influence and in most cases dictated their political lives. It is not that most cannot read or write, but only in crammed Koranic verses so that they can be submissive and obedient to their Allah representatives.

Since most of these lessons come from the Middle East, they even face that direction when praying. The distraction have closed their minds to other forms of learning in order to function in the real world. While Middle East countries send their children to western universities, most Hausa value Arab religious teaching or pilgrimage to Mecca. Southerners relapsing into trance by the heavenly promises of pastors, imams and Voodoo priests are not far behind.

Religious relapse has closed the minds of most Hausa to western education which their western trained leaders hypocritically called boko-haram. In spite of all the enticement to go to secular schools up to level they want, free of charge, most Northerners would rather cling to religious teaching encouraged by their religious and political leaders that reward their trust and loyalty. Even worse, is the charlatan obligation to convert or kill those they see as unbelievers: kaferi.

Once Hausa can overcome their religious bias and attend western schools or universities, they are guaranteed position of power as long as they retained or claimed relationship to the Fulani hierarchy. While this is adequate for political power or field of study, it is detrimental when given position they are least qualified for, as Federal Character deprive community of amenity.

Northerners have potential to feed not only Nigeria, if they increase high yield production for storage. More could be done if their leaders can think beyond dominating political fields. Those political positions only allow you to loot selfishly. Primary skills needed for infrastructure which Nigeria lacks are imported. If Hausa leaders are serious about catching up with their Southern brothers and sisters; welders, plumbers, carpenters and ironworkers must be trained there.

Though younger generation are better educated in the South, skilled trade is still looked down on by many, only to import them from the foreign countries they contract with to build bridges, other infrastructure the Country needs badly. We are the only educated folks that contracted Ajaokuta Steel without stipulation for trained Nigerians after 5, 10, 20 or 25 years. Even Eastern and Southern African countries now demand that in their foreign contracts.