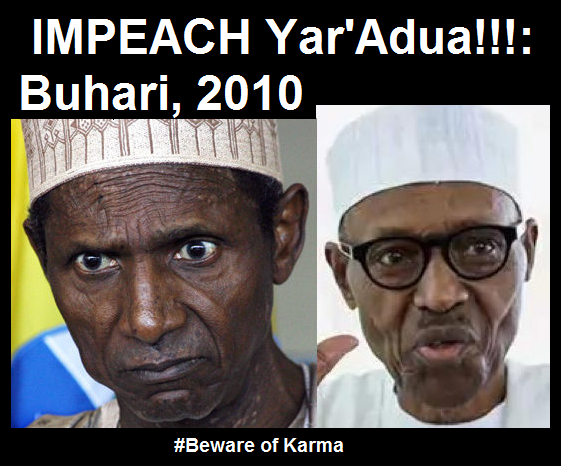 As it seems to, more frequently than not, Nigeria is once again making global headlines in a head-spinning, precarious imbroglio. AFP/Yahoo news headlines today read: “

Nigeria’s President Seen In Public for First Time in Weeks.”

With almost all arms of government and governing agencies at war with each other, one cannot deny that the house has no head. If it is not the DSS fighting the EFCC, it is the Senate fighting Customs. The problem is, president Buhari is not well. And rather than for the nation to harmonise with a necessary spirit of hope and positivity essential for growth and recovery, uncertainty over the president’s health tops the news. The hopeful pray fervently for Buhari to make his next periodic appearance and the vultures wish him dead or resigned. Both groups looking forward to two special days from one week to the next, to see if and how he makes it out. The days are Wednesday, the day of the Federal executive council, FEC meeting and Friday, Muslim Jummah holy prayers day. Those are basically the only two days Buhari ever makes public appearances. He has made one FEC Wednesday appearance and two Friday Jummah show-ups in the past month.

But there is another problem, deeper than mere photo appearances reveal. Why was it that things seemed to run smoothly and with harmony and mutual respect between agencies and the security services more in control and even violent marauders less murderous for the nearly two months when Buhari was in London, but fell apart when he retook the reins? How come the CBN was finally put in check and the cabal forex subsidy scam finally dismantled only when Buhari was away?

Some people are questioning not just the president’s physical health but his mental state of health. Are those meeting with him when he seldom does get to, noticing that he is incoherent? Is he not only gravely cachectic but also in an unbalanced state of mind? There have been rumors of this problem, in addition to media publications, most recently one in SaharaReporters that mentioned that Nigeria’s president suffers from “early-stage dementia.” Is this why the agencies are all their own heads as on a Medusa?

When Umar RA and Others Blocked The Ill Prophet From Acting, Saying He Was ‘Talking Nonsense”

Here’s an interesting historic reference. At this stage I plead my non-Muslim readers bear with this short ‘sermon:’ In the time of the revered Muslim prophet, Mohammed upon whom be peace, as he lay ill before his death, he requested a pen and paper to write an important statement (hadith). Important to know, the prophet had categorically banned anyone from writing any statement (hadith) other than the Quran statement (hadith). His words, “Do not write anything from me, and whoever writes anything but the Qur’aan, let him erase it.” (Narrated by Muslim). As he lay terminally ill and decided to have an essential statement (hadith) written, the second Caliph of Islam, Umar RA and some others in the room refused him as stated: Umar said, “The Prophet is seriously ill and you have the Qur’an; so the Book of Allah is enough for us.” (Bukhari Volume 7, Book 70, Number 573) and repeated here “They said: Allah’s Messenger (may peace upon him) is in the state of unconsciousness [yahjur, literal translation: “talking nonsense”; obviously, the Prophet was not unconscious since he was speaking. (Muslim ibn al-Hajjaj, Muslim 013:4015)

From this we see that 1. up till his death the companions understood that writing statements (hadith) other than Quran was banned, and 2. some of them referred to the prophet as “so sick he must have lost his mind.”

We do see from above in what I believe Buhari and many of his supporters believe, that illness can warrant restriction from active authoritative service.

Like Jesus the Messiah (Ref: Luke 10:26), I believe in deliberations from a person’s belief position.

Note: It must be mentioned that many Muslims including companions, some of whom disagreed in the room, hence the commotion that ensued before the Prophet chased them all out; and others including Ibn Abbas RA, another major companion and cousin of the Prophet, who narrated the reference above, disagreed with what ensued, with Ibn Abbas even weeping as he narrated it in disapproval with them for blocking the Prophet(s).

Thinking about Prophets and Messiahs, they never hid their illnesses and trials. There is no shame in being sick or beaten. On the contrary, their pain and stripes are are fundamentals of faith.

The World Is Watching

So we are left as a nation hanging, not knowing the diagnosis and state of health of our president, both physically and mentally. While the last Pope resigned at advanced age as did the great Mandela, we do not appear to have this personality type in Buhari as it yet appears. Nigeria is in a limbo. The top trending thought and topic is “Buhari’s health.” Where can we find answers to this?

Well, boosted with drugs and lucozade boost to make Friday appearances is not nearly enough. The president is so lean and fragile, his appearances don’t do much to reassure the nation and maintain its international reputation. The Nigerien leader’s last-minute cancelation of his visit to Buhari after, according to spokesman Femi Adesina, the presidency had already “bought drinks and spread the table,” is an insult to Nigeria. We can imagine ultra-important foreign governmental trips and visits being canceled or rescheduled due to the president’s incapacitation. The economy and all aspects of life of the citizenry are closely tied to the image of the president and are taking hits from his over four month rest impasse. 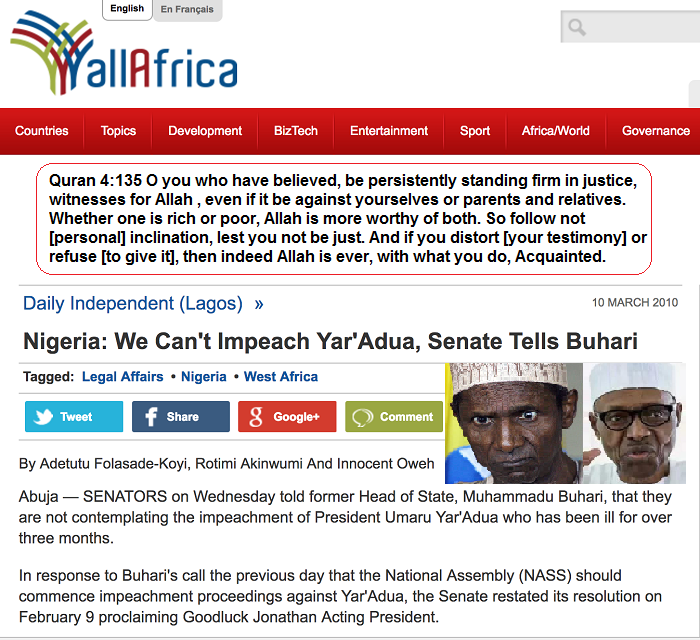 Calls are increasing for Buhari to either step aside or resign. You can’t blame those of us who have said so because as I emphasized in my last article, “Dear Northern Provocateur: Was Buhari Ijaw When He Fought For Yar’Adua’s Impeachment?,” Buhari himself would by now have called for his very own impeachment due to his questionable health and capacity to continue on the nation’s top job.

Why We Can Only Believe Buhari

So how can we clear up this mess? The first step would be for president Muhammadu Buhari to address the nation interactively. We cannot trust his handlers because they are undeniably dishonest. It’s the same whether he is in Nigeria or London. From Lai Mohammed to Femi Adesina; even Vice president Osinbajo all lied to us that Buhari was “hale and hearty.”

The only person who told us the truth was Buhari himself upon his return when he revealed pointblank that “he had never been so sick” as the BBC captioned their March 10th article, “Nigeria President Buhari: I’ve never been so sick.”

Please Talk To Us

We need the president to talk to us so we can evaluate his state of mind and desire to remain at the helm in Aso rock. We have asked the senate to step up but they remain derelict of their constitutional duty to protect the nation’s interests. There is no official position from the government on the president’s health. Is he sick? What is his diagnosis? What does “rest” mean? How long “rest” did the doctors recommend?

Our last useful update on Buhari’s state of health was March 10th. We saw pictures of him in the UK, yet he admitted that he was so sick at the time. Pictures and 1 min video clips do nothing more than exposing how emaciated and frail the president is. We need Buhari to talk to us. We are begging.