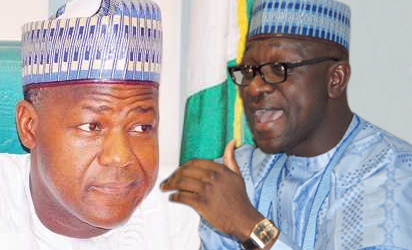 Suspended lawmaker, Abdulmumin Jibrin, on Tuesday expressed his frustration at the pace with which the State Security Service is handling his petition against the Speaker of the House of Representatives, Yakubu Dogara, and some lawmakers.

Mr. Jibrin said the budget padding scandal plaguing the House constituted a threat to national security and would mark a dereliction of duty if the secret police failed to press charges against lawmakers in a timely manner.

“I strongly believe that these chronic fraud and corruption in the House of Representatives are undoubtedly a threat to national security and must be dealt with decisively without further delays.

“You will be failing in your duties and responsibilities as patriotic citizens and officials of the State Security Service if you fail to take necessary action to bring this disgraceful and destructive situation to an end,” Mr. Jibrin said.

Mr. Jibrin’s displeasure was contained in a statement he sent to PREMIUM TIMES on Tuesday afternoon, which he also used to weigh in on the recent clampdown on judges by the SSS.

Mr. Jibrin said it was instructive to see the SSS move against judges while failing to act on his petition which was sent nearly three months ago, leaving Mr. Dogara and other lawmakers to walk free.

“The accused persons have become emboldened, walk around freely, carried out actions to destroy evidence, made attempts to kidnap and assassinate me and corruption continued to thrive in the House of Representatives,” Mr. Jibrin said.

Between late July and early August, Mr. Jibrin visited the SSS, EFCC, ICPC and the police with a scathing petition that contained alleged gross misconduct on the part of the lawmakers. But it remained unclear if any of the agencies has acted.

The crusade followed his removal as the chairman of House Committee on Appropriation effective July 20.

Mr. Dogara and other lawmakers mentioned by Mr. Jibrin individually denied the allegations against them. The House also denied the fraud charges against members as an institution.

Mr. Jibrins actions infuriated a majority of the 360-member House and he was consequently suspended for one year last month following an investigation.