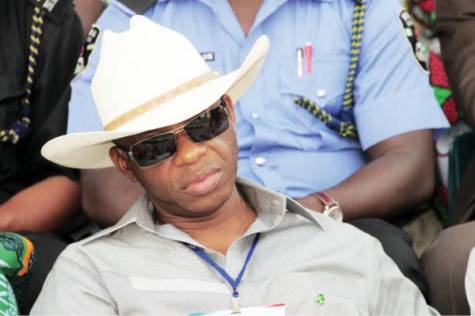 Proceedings in the trial of former Imo State governor, Ikedi Ohakim, before Justice Adeniyi Ademola of the Federal High Court  Abuja, resumed Tuesday, October 20, 2015, with the prosecution witness giving a blow-by-blow account of how the former governor allegedly made a cash payment of $2, 290,000.00(Two Million, Two Hundred and Ninety Thousand Dollars), for a piece of land at Plot No. 1098 Cadastral Zone A04, Asokoro District, otherwise known as No.60, Kwame Nkurumah Street, Asokoro, Abuja.
Justice Ademola had admitted Ohakim to bail on Thursday, July 9, 2015, following his arraignment on Wednesday, July 8, 2015 by the Economic and Financial Crimes Commission, EFCC, on a three-count charge bordering on money laundering.
At today’s hearing, prosecution witness,  Ishaya Dauda, said investigation into the alleged offence began in 2010, after the Commission received petitions coupled with intelligence reports.
Led in evidence by the prosecution counsel, Festus Keyamo, Dauda, a Senior Detective Superintendent, SDS, with the EFCC, said the accused person, who served as Imo State governor between 2007 and 2011, was invited to the EFCC office in 2013.
‘‘I gave him the petitions to go through and asked him if he would be willing to volunteer statement or not and he answered in the affirmative.  I then admiistered the word of caution and EFCC statement form on him. I also asked him whether he understood the word of caution and he said yes; then, he signed the form, indicating that he understood the word of caution,’’ he told the court.
According to him, the accused person was given the EFCC Asset Declaration form to fill, in addition to his statements that were obtained five times between 2013 and 2015.
Copies of the five statements, which were obtained on January 25, 2013; January 31, 2013; June 18, 2015; June 22, 2015 and June 29, 2015, were tendered and admitted in evidence as exhibits EFCC 1 to five.
Giving further evidence, Dauda said the accused person made copious statements regarding the said property.
Working on the intelligence reports at our disposal, after the accused person had declared his assets, it was discovered that there was no banking transaction for the purchase of the property. We found out that only cash payment was made in respect of the property.  So, we took the accused person to the property. When we brought him back to our office, we asked him who owns the property and he said he rented the property through one Abu Sule, Managing Director, Tweeenex Consociate H.D. Limited.’’
However, the prosecution witness said Abu Sule, who initially denied ownership of the property during interrogation by the EFCC, said the accused person gave him $2.2million, which was equivalent of N270m at as that time, in one payment.
‘‘Abu Sule said he bought the property from one Alhaji Isah Muntair Maidabino. He also said after receiving the money from the accused person at the Imo State Government House in Asokoro, Abuja on a certain night, he made the cash payment to Alhaji Issa Muntair-Maidabino,” he added.
Both the accused person and Abu Sule were said to have entered into a tenancy agreement, so as to give the impression that the former had rented the property from Tweeenex Consociate H.D. Limited.
He added: ‘‘Abu Sule also said the accused person issued a Fidelity Bank cheque for N20m as rent for two years. He, however, said that he used the money to renovate the property and another property in Asokoro.’’
Dauda further told the court that Muntair-Maidabino, during interrogation, confirmed receipt of cash payment to the tune of $2.2million from  Sule.
According to him, when the accused person was confronted with the disclosure by Abu Sule, he owned up to the ownership of the property.
He said both the accused person and Sule were later invited to the EFCC office, where they disagreed on the mode of payment.   While the accused person claimed he made the payment in instalments, Sule debunked that statement, saying that he( the accused person) made cash payment to him.
Justice Ademola has fixed November 12 and 13, 2015 for cross examination and further hearing.
Wilson Uwujaren
Head, Media & Publicity
PRNigeria