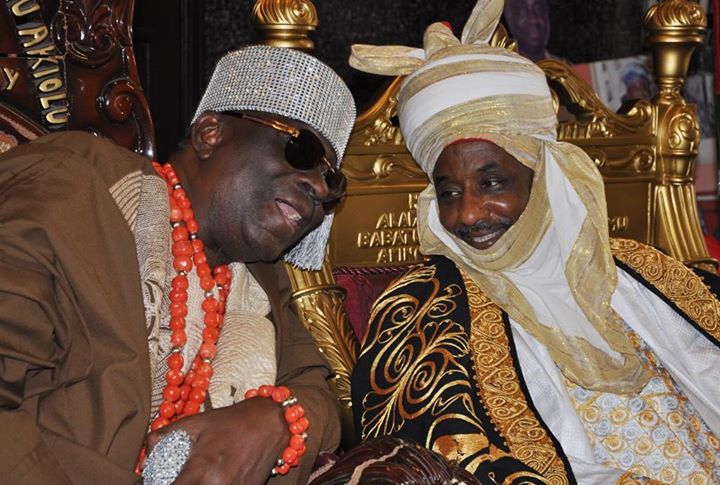 Regardless of our varying opinions on the messages being put forth by Kano’s Emir, Mohammed Sanusi II, we most likely agree that his approach is quite immature and loaded with spite and ridicule. It is hard to see this aggressive deconstructionism, to borrow a terminology from Ibraheem Waziri in his 2005 article to the Emir as being a positive and constructive mission.

Sending his daughter as emissary to castigate the north and brim over her slapping a boy in class for being “disrespectful to girls.” Apart from the common Islamic view that it is wrong to slap a human being’s face whatsoever, it begs reason why the Emir would be publicizing such a story of violence be it from or against boys or girls. An Emir would be expected to have reproached his daughter or son involved in fights in school to embrace the habit of reporting to parents and school authorities and not to later make this a an item of exaltation.

As the Emir goes deeper almost everyday, he appears to be getting more angry and more bitter. Having to relocate permanently to pauper-filled Kano from “first world-like” Abuja, is the abundance of the poor and almajiri kids the Emir is confronted with everyday he drives out irritating him beyond control of self? Indeed there is historic evidence the Emir is disgusted by and disrespectful to the poor; referring to his tirade against late Sheikh Ja’afar Adam, the Emir then referred to him as a glorified Almajiri. Full quote follows:

“And a final word, for those who care to listen. There are people who can be cowered, bamboozled or intimidated by glorified almajirai. I am not one of them. Period.” – SLS to Sheikh Ja’afar Adam, 2005

While mere masses like myself may resort to extreme positions to mitigate reform in social issues of concern, a dignified Emir is not expected to approach issues with such rash and extremist approaches. As governor Yari said, the Emir could approach him to rebuke him in private and then unless there is no adjustment, then come out to publicly ridicule him. Writers like myself who are unable to get access to administrators and cry in the face of atrocities that consume the lives of the helpless masses, are left no options than to write harshly. However the Emir has many more options of pushing change without resorting to publicly ridiculing people he has for years wined and dined with and whom he will directly work with the bring out that change.

Some suggest that with the possibility of Buhari not running in 2019, and the unconstitutional assumption that power must remain in the north, many northerners are falling head over heels to compete for public space-recognition towards being a vice to Osinbajo in the unfortunate event of Buhari’s resignation or to contest for the presidency should Buhari not seek re-election. I would not accuse the Emir of this but it is worthy of thought.

Indeed there are problems with the north. This cannot be denied. And the problems stem from the elite and northern political and traditional rulers, no question. I have written harshly critical of these. My 2013 piece, “There is a Darkness over the North,” is one such article. Everyday I campaign to ban the almajiri child-abandonment system. However adding extremist and possibly anti-religious positions as well as reigning insults is not a very mature approach to addressing these real issues especially for a man with considerable power and influence.

Again, resorting to extremism is likely to cause one to veer out off the path of religion and social-moral logic. At least two of the latest statements by the Emir have been taken out of context or within context to ridicule Islamic fundamentals, Shariah and Polygamy as aberrations, all linked to poverty. Is this what the Emir meant as the headlines read? Mufti Menk defended the Emir in the first instance, saying the Emir was not being contumelious of the Islamic and African traditional cultural polygamy practice. The Emir has continued access to the media and has not himself corrected the impression widely perceived by his headlines, “Polygamy is linked to poverty,” and “Shariah is linked to poverty.” This is obviously an issue considering that the Emir of Kano is Nigeria’s #2 Muslim leader. I believe I have debunked the two opinions in several articles.

Considering poverty in the north, again HRH Emir Sanusi II’s approach and statistical play is misleading to an extent and covers up some of the most important reasons why the north and Nigeria as a whole is poor. The Emir never mentions the well known fact that coastal regions are more wealthy than landlocked regions as the north is. Again, while he has made references to polygamy and Shariah law, the Emir has avoided speaking about the role of the elite, a group to which he proudly affiliates, as a main cause of the poverty in Nigeria and the north in particular.

Social theory states that not all people are entrepreneurial, like the Igbo, and not all people create the jobs and development for a society. It is a minute percent that have this capacity (See: Ayn Rand). This meagre percent, elite either do so – create opportunity– or embezzle as happens in Africa. What has the well placed and financially sufficient Emir (and his like) created in the north over the past several years? What free institute of technology and learning? What public library? What large public social development project? It is not the poor at fault but the opulent who coveted the nation’s resource wealth while trapping the masses in deadly poverty. 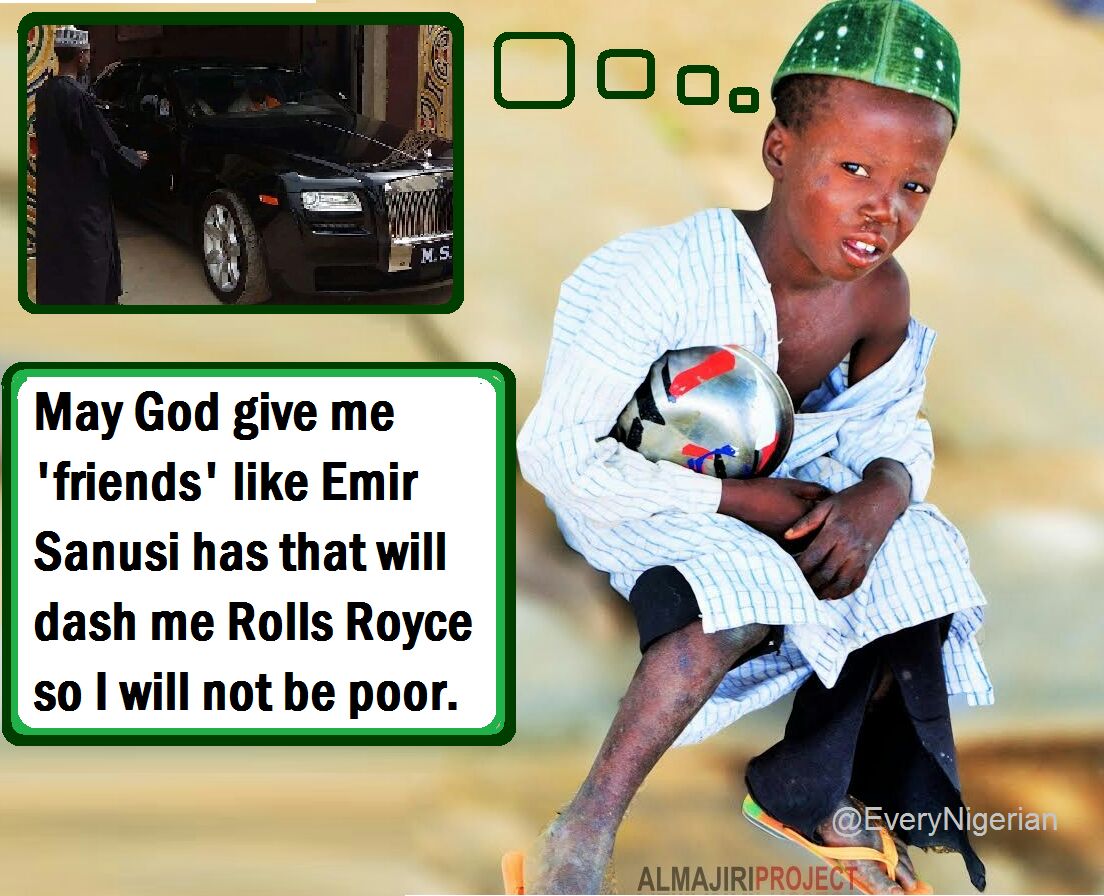 In my pronouncements against Goodluck Jonathan when we ran the “Where Is Our Money” campaign in search for the missing $20 billion dollars (actually more like $100 billion), I was not one who defended the Emir of the FRC’s June 2013 report indicting him for gross misappropriation of Nigeria’s billions of dollars over the years. The report had laid out how in addition to spending millions on “tea and coffee,” the Emir as central bank governor reportedly spent about a billion dollars a year on projects of his choosing around Nigeria without regard for procurement board stipulations and oversight. The report mentioned that the Emir in 2012 spent N163 billion, about $1 billion on 63 such projects around Nigeria. I have put forth a challenge for anyone to show me where and what these projects are. Like I was saying, in my attacks against Jonathan back then I mentioned, and I quote:

“…It was with disappointment that I read an article published February 25th, 2014 in PremiumTimes from respected author, Femi Aribisala in which he occupied the column lambasting sacked CBN governor Sanusi Lamido Sanusi (SLS).

“He is welcome to the club, rather late, in 2014. Many of us have written critically of SLS since years passed. SLS is a system man, of course he is. He has been part and parcel of the administration. There is no doubt about this and no one has claimed otherwise. Unlike the #OduahGate case, you do not see any one of us writing and publishing in the defense of SLS, explaining why he must be forgiven. No. All we progressive Nigerians have done is said—as it is for Sanusi so it shall be for Mr. President.” See in ABuSidiqu

Again, as central bank governor, Sanusi is renowned for introducing borderline-illegal taxations of Nigeria’s masses, with cashless policy, “unconstitutional” fines in the form of taxations on Nigerians for their constitutional right to deposit and withdraw money from their accounts. Supervising banks that in a ponzi-like scheme, further taxed Nigerians on all their CBN-forced banking activities, the Emir a former bank MD with and thus invested in the banks, created a system that fed the banks rich off of the backs of the masses. I have written extensively on this in the past (2013: CBN: The Poverty In Sanusi Lamido Sanusi’s Legacy). So please do not call me one of those who praised Sanusi then and castigates him now.

Whatever the Jonathan administration is accused of doing and destroying only happened with the full cooperation of Emir Sanusi for the most parts of 2009 to December 2013 when politics started along with the nearing release of the indicting FRC report, and Sanusi suddenly went renegade. This is a fact.

Suddenly, though the Emir did not himself say it, the social media is flooded with a defense of recent lavish acquisitions of the Emir, that “he did not buy the Rolls Royce, his friends did.” Well of course, friends from the banks and political cabal who the Jonathan government with its apex bank governor Sanusi robbed and riddled the masses with poverty to enrich.

“Have you seen him who denies the religion? He is the one who harshly rebuffs the orphan and does not urge the feeding of the poor. So woe to those who do prayer, and are forgetful of their prayer, those who show off and deny help to others. (Surat al-Ma’un: 1-7)”

“Whether one is rich or poor, Allah (the God) is more worthy of both,” Quran says in 4:135. Poverty as “irritating” as it is, is not a crime or a sin; but I can list many other things close to the IMF-World Bank and Central Bank Emir that possibly are.

On a final note, rather disappointingly for many is the fact that scouring through most of the Muslim Emir’s recent outbursts, one never sees a quote from the Quran, or other religious material, rather in his latest piece, the Emir while slamming others, defends his position of refusing to personally defend himself with a quote from the “counsel of Michelle Obama.” Does the Emir not see value in the Holy book revealed in the 7th century? Only he can make these matters plain.