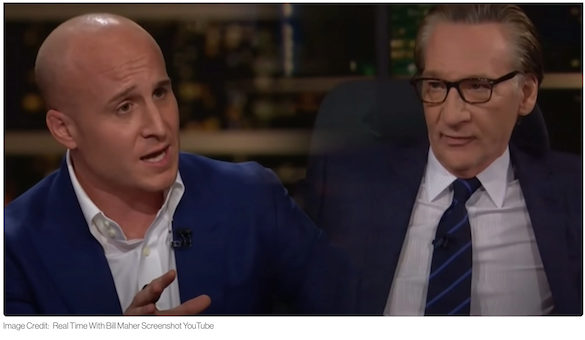 During Friday’s edition of “Real Time With Bill Maher,” the show’s host upset a guest and many audience members by admitting he doesn’t want to take a Covid booster shot.

Due to the original Covid vaccines failing to effectively protect people from virus variants such as the Delta, the Biden administration last week urged all American adults to get a booster shot eight months after their second dose.

Touching on this subject, Bill Maher told his live audience, “Now they want us to do all these boosters… I mean, I don’t want a booster. I never wanted the vaccine, I took one for the team.”

One of the show’s guests, former congressman Max Rose (D-NY), stared in awe after Maher said he never wanted the vaccine in the first place.

Maher went on to explain that most millennials don’t want the vaccine and don’t think they need it, saying, “They’re probably right.”

“I tell them, ‘I didn’t want it either, I took one for the team,’” Bill said to a round of applause. “But, every eight months you’re going to put this shit in me? I don’t know about that.”

Continuing, Maher suggested, “Maybe I don’t need one. I don’t want a one-size-fits-all. My body may be different from your body.”

“My body isn’t different from yours?” Maher said, defending his statement.

“Every body isn’t different? I just read the statistics about who dies from it,” Bill insisted.

Rose answered, “Stop. You’re trying to be cute and you’re rolling the dice.”

Next, the former congressman emphasized the importance of people getting vaccinated and trusting our institutions.

Rose went on to say it’s vital that people with compromised immune systems and the elderly get booster shots and that they trust the people pushing the experimental jabs on them.

At this point, Maher noted that he doesn’t have underlying conditions and isn’t considered elderly, to which Rose disagreed.

“Is my body different? Could I have some medical autonomy?” Maher asked.

The flustered left-wing propagandist Rose replied, “No. Look, you absolutely, no one is mandating it for you in your particular position, although they might!”

Rose continued to reveal his true Marxist colors by saying it’s “very dangerous to enter into a conversation here about personal responsibility.”

“The truth of the matter is that this is a matter of collective responsibility,” Rose said.

The cringe-worthy segment was met with criticism from the left after the show host dared to step out of line by questioning the boosters.

For example, the liberal rag Salon claimed Maher was ranting against boosters and many Twitter users hailed Max Rose for pushing back.

Perhaps Bill started to question the jabs after he caught Covid in May despite being fully vaccinated.