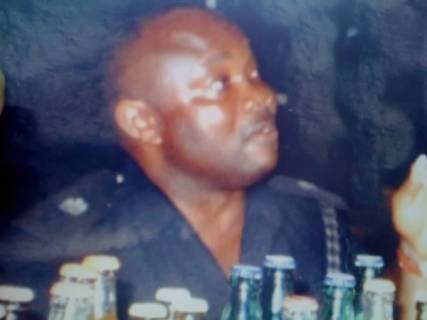 Nigeria’s Inspector General of Police, Mohammed Dahiru Abubakar, has raised eyebrows by reinstating Sam Chukwu, a senior police officer and fugitive from justice indicted for masterminding an extensive list of criminal activities, including running a kidnapping ring in Enugu State.

In February 2012, Justice Afam Nwobodo of the Enugu High Court had issued an arrest warrant for Sam Chukwu in connection with the 2009 kidnap of 19-year-old Lotachukwu (Lota) Ezeudu. The kidnap victim, who was then a second-year accountancy student at the University of Nigeria (Enugu campus), has never been seen since, and is presumed dead.

Justice Nwobodo had issued the arrest warrant after Mr. Chukwu failed to voluntarily present himself in court for arraignment.

In a development that has outraged other police officers, judicial workers and civilians, Nigeria’s Inspector General of Police, Mr. Abubakar, recently deployed Mr. Chukwu to serve as the new zonal provost at the Zone 9 headquarters of the Nigerian police based in Umuahia, the capital of Abia State. The appointment took effect on July 17.

As part of the duties in his new assignment, Mr. Chukwu will be responsible for disciplining errant officers, among other duties.

“The appointment of Sam Chukwu is very weird,” a prosecutor with the Ministry of Justice in Enugu told SaharaReporters, adding that the IG has a lot of explaining to do about his decision. The visibly angry prosecution lawyer added, “This is an officer who has been declared wanted by a court of law in Nigeria in connection with a well-known kidnap case. This is an officer who knows that he has been summoned by a court of law, but has contemptuously refused to show up in court on several occasions. We even appealed to the Inspector General of Police to use his good offices to help us track down the fugitive officer, but the police in Enugu kept telling us that they could not arrest and produce Sam Chukwu in court because they were not aware of his whereabouts. Suddenly, the IG knew where to find the officer who was in hiding and to give him a new assignment. Tell me, how do we expect common people to have any confidence in the police as a body that fights crime?”

Investigations by SaharaReporters revealed that many police officials in Abuja as well as Abia and Enugu States are indignant over the IG’s action and share the prosecutor’s shock and dismay. According to a senior police officer in Abuja, Mr. Chukwu’s reinstatement “has made me and other officers ashamed.” The officer said he was not privy to who advised the IG to reabsorb the fugitive officer and post him to Umuahia. “I don’t know what factors the IG considered before he arrived at his decision,” said the officer, adding,  “but I know that something is definitely wrong here. I don’t support the decision.”

The officer added that the IG should have asked Mr. Chukwu to go and submit himself for trial and establish his innocence first. “Are we now lacking police officers to work as provost that the IG has to appoint somebody who has been accused of the crime of kidnapping—and who ran away from the court?”

An Enugu-based police officer told SaharaReporters that Sam Chukwu’s appointment was not good for the image of the police. “There are posters in many parts of Enugu and all over Sam Chukwu’s hometown declaring him wanted. The same man who is declared wanted is now occupying a big police office again,” the officer said in consternation.

An Enugu-based businessman who is a longtime resident of the capital of Enugu State said he was disturbed by the IG’s action. According to him, the reinstatement of Sam Chukwu “simply serves as a clear signal that the Inspector General Mohammed Abubakar is not interested in combating the problem of kidnapping and other crimes in Enugu or the entire southeast [part of Nigeria].”

One of Lota’s kidnappers, Desmond Chinwoba still on the run

The businessman stated that Mr. Chukwu was notorious in Enugu as an officer who sponsored criminals and engaged in various criminal activities himself. The source alleged that it was well-known in Enugu that Mr. Chukwu was hired by politicians to help them rig elections and to intimidate their political opponents. “I have lived in Trans-Ekulu, Enugu, for more than thirty years. Many people there know about the many houses that Sam Chukwu owns in that Trans-Ekulu,” said the source. He asked, “Are you telling me that the Inspector General does not know about Sam Chukwu’s activities? Where did Sam Chukwu get the money to build all his houses?”

In August 2005, Mr. Chukwu, who was then the DPO at Ogui police station, was accused of ordering the execution of a young man, Chinedu Ani, at the behest of a then member of the House of Representatives U.S.A. Igwesi. An Enugu-based lawyer familiar with the case told our correspondent that Mr. Chukwu sent two police officers after two young men who had had a verbal encounter with the legislator. The policemen cornered the young men in their car and opened fire, killing one and seriously wounding the other.

The horrific daylight execution by the police, which happened near ACB Bank on Ogui Road, Enugu, sparked public protests. Then Governor Chimaraoke Nnamani of Enugu State set up a panel headed by Justice Ken Ezeike to investigate the police attack. Even though the panel submitted a report, Mr. Nnamani’s government failed to issue a white paper. An Enugu-based lawyer accused then Governor Nnamani of bowing to pressure from some top politicians from the state to shield Mr. Chukwu from blame.

SaharaReporters contacted Bona Ezeudu, Lota’s father and a well-known artist whose paintings and sculptures have been exhibited in major galleries in Nigeria and abroad, to comment on Mr. Chukwu’s reinstatement. In a telephone interview, he said he was too distraught to make any comments, asking our correspondent to direct our questions to police authorities.

However, a relative of the Ezeudu family, who is a US-based medical doctor, told SaharaReporters that the IG’s action was “distasteful and shocking.” He said the family had appealed to the police and the IG to help find Mr. Chukwu, to no avail. “Nigeria’s Inspector General of Police cannot claim to be ignorant of the Lota Ezeudu case which has received wide coverage in the Nigerian media and beyond. Even if Sam Chukwu went to the IG of Police and presented a tissue of lies, the IG could have easily punctured his lies if he wanted to. Why didn’t the IG have the courtesy of calling Bona [Ezeudu] or any member of the family to hear their own side of the story before rushing to give a criminal suspect a post that amounts to a promotion?”

The source also recalled that former Inspector General of Police, Ogbonnaya Onovo, had summoned Mr. Chukwu to Abuja, suspended him from the police, and detained him over the Lota Ezeudu kidnap case. “Onovo was at least sensitive to the plight of the Ezeudu family which has not seen their son since September 26, 2009 when he was abducted. But the current man there just behaved as if he had been living on the moon and never heard about Sam Chukwu’s shady profile.”

Several suspects, including Mr. Chukwu’s son, Nnaemeka Chukwu, are in custody and being tried for the kidnapping of Lota Ezeudu. Among the suspects are two former police officers, Ernest Okeke and Desmond Chinwuba, who were living with Mr. Chukwu and his family at the time Lota Ezeudu was kidnapped. Mr. Okeke is in prison custody, undergoing trial, but Mr. Chinwuba has been on the run for several years.

Prosecutors handling the kidnap case said they believe Mr. Chukwu helped Mr. Chinwuba to flee in order to avoid arrest and prosecution. Prosecutors believe that Mr. Chukwu’s son, Nnaemeka, who was Lota Ezeudu’s classmate in secondary school, was used to lure the victim into a kidnap trap.

One police source in Enugu told SaharaReporters that two cars belonging to Mr. Chukwu were used in Lota Ezeudu’s kidnap operation. In telephone interviews, a source with the Ministry of Justice in Enugu told SaharaReporters that their prosecutors were confident that their case against Mr. Chukwu was solid. The source said he was worried that the IG’s action was designed to “thwart the course of justice and empower Sam Chukwu to intimidate investigators, prosecutors, Lotachukwu Ezeudu’s family, and even the presiding judge.”

However, a prosecutor with the Enugu Ministry of Justice said he saw a silver lining in the IG’s “regrettable decision to elevate a fugitive from justice to a major post in the Zone 9 command.” According to him, “The Nigerian media and the Nigerian public will now take greater interest in the [Lota Ezeudu] case and will begin to ask questions. The police can no longer tell the court that they don’t know where Sam Chukwu is. At a time when the international community is focusing on Nigeria because of the Chibok matter [more than 200 schoolgirls abducted by Boko Haram insurgents], this issue is likely to draw international coverage. If the police don’t produce [Sam Chukwu] in court, then the whole world will be witnessing how justice is administered in Nigeria. This action [the reinstatement of Mr. Chukwu] is likely to backfire. I won’t be surprised if President Goodluck Jonathan, the National Assembly, and the Police Service Commission ask the IG to do the right thing.”

Two days ago, SaharaReporters sent several questions pertaining to the IG’s action to police spokesman Frank Mba. Our note to the police image maker asked: “Why did the IG of Police reinstate Sam Chukwu even though he [Chukwu] has not been cleared of complicity in kidnap and murder?

If the IG knew where Sam Chukwu was all along, why did the IG not demand that he show up in court to answer charges—or order his arrest and presentation before the court?”

In his response, Mr. Mba asked for more time to investigate the issue, adding that the issue of Lota Ezeudu’s kidnap and “obviously happened long before the current IGP came aboard.”