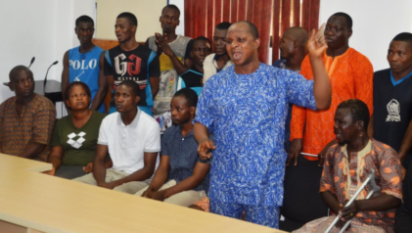 THERE was outrage from notable Nigerians from the South West, yesterday against the one-sided parade of Ile-Ife residents over the recent clash between the Yoruba and Hausa communities in the ancient city.

On its part, the YYSA accused the Presidency of out-rightly influencing police investigation.

In his comments, Chief Adebanjo chided the police for its bias saying; “It shows what we have been saying all along about the Police. If each state had been allowed to have its own state police, the police in that area would have been able to detect those involved in the crisis and arrest the culprits. ‘’Apart from that, if you are an unbiased judge and two groups are fighting, if you arrest members of one groups, what happens to members of the other group? There is no sense in that.”

It is not palatable —Bode George

Reacting to the one-sided parade, Chief George, who is the Atona Oodua of Ile-Ife said such action by the Police was not palatable for the country noting that parading one tribe is not sensible.

He said: “Things that would conflagrate this country must be avoided with a passion. Parading some people and saying they are culprits has severe tribal linkages and we cannot afford that at this point in time.

“Anything tribally oriented is not good, especially when you parade Hausa people, Igbo people, Yoruba people. We are like sitting on some keg of gunpowder. Politically, that is not wise. And I want to appeal to the IGP that parading one tribe is not sensible. People would read whatever meaning. The interpretation would go beyond the level we can control, it is not palatable because Nigeria is a heterogeneous state.”

It can fan the ember of ethnic strive — Bucknor-Akerele

Also reacting, Senator Bucknor-Akerele said: “I think it is wrong to parade suspects in any case before trial, and worse still, I think it is even more wrong to parade one side. This was an altercation that involved Yorubas and Hausas, are you saying it is only the Yoruba that was involved? So I think it is very dangerous what the police did by fanning the ember of ethnic strife. They should stop it.

It can aggravate the situation—Babatope

Also faulting the action, Chief Babatope said: “the police is wrong to have paraded only Yorubas, but this is not because I am a Yoruba man. The police are expected to be objective but what they have done now is to aggravate the situation. They need to retrace their steps and do a thorough job of the situation.

Condemning the arrest, YYSA’s President, Habib Olalekan Hammed said the Ile-Ife crisis was tainted with an alleged display of great tribalism even as he accused the presidency of influencing the police.

Hammed said: “We Yoruba youths seriously object to a one-sided arrest in a clash between two groups in this undue deployment of federal influence along fault lines. We began to suspect foul play since those who were arrested for an offence allegedly committed in Ife were being bundled up to Abuja for nothing but sheer intimidation because we don’t believe it is proper to charge anybody in Abuja for a crime allegedly committed in Ife.”

Image: Parade of suspects responsible for the clashes, disturbance of public peace and mayhem In Ile-Ife, Osun State. Photo by Gbemiga Olamikan