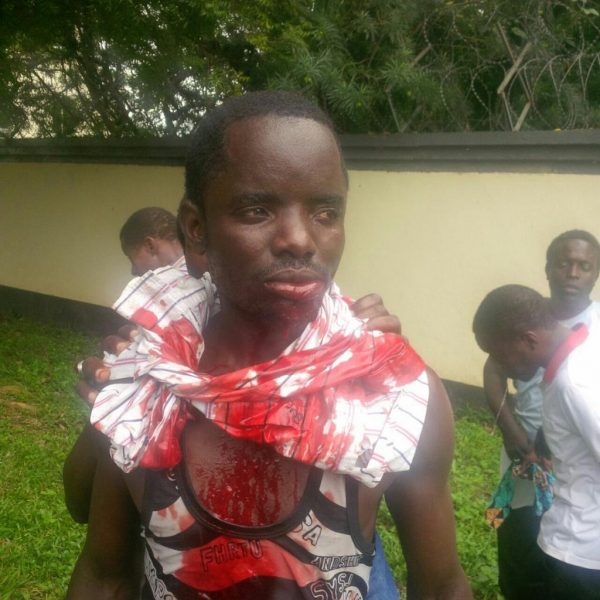 On Thursday 22/09/16, thousands of members of the Islamic Movement in Nigeria (IMN) converged in Abuja to protest the continued illegal detention of our Leader Shaikh Ibraheem Yaqoub Zakzaky, who remains to be unjustifiably be held without charges and access to appropriate medical care.

Firstly, the Nigerian army had mounted make-shift road blocks seeking to prevent people from entering Abuja for the protest march. About a hundred arrests were made, including of women and children and taken to military barracks. The thousands who had managed to enter Abuja for the peaceful march were crudely attacked by the Nigerian Police, who physically attempted to prevent the march for no just cause. They fired tear gas and live bullets as well to disrupt the peaceful march. Consequently, scores were injured and many more were arrested and are being detained.

IMN has relentlessly carried out peaceful protests across the country, Abuja inclusive to press for the release of Shaikh Zakzaky and all those in illegal detention with him, since the brutal clampdown on the IMN in December last year. Why this obnoxious attempt to further trample on the rights of the people even after the assurance given by IGP some weeks ago that the constitutional rights of Nigerians to peaceful protest is guaranteed is baffling.

Our rights to freely move is inalienable and we wish to remind the Nigerian security agents of the fundamental rights of people to assemble peacefully and demonstrate without any official harassment. If at all they are in doubt or have forgotten, they should consult their lawyers since Nigerian courts have upheld this position.

We would also like to remind the general public of what Justice Muhammad JCA said in his contribution to a judgement involving a case of seeking police permit for any peaceful protest. The honourable Judge had this to say: “In present day Nigeria, clearly police permit has outlived its usefulness. Certainly, in a democracy, it is the right of citizens to conduct peaceful processions, rallies or demonstrations without seeking and obtaining permission from anybody. It is a right guaranteed by the 1999 Constitution as amended and any law that attempts to curtail such rights is null and void and of no consequence.”

The peaceful protest march today was aimed at drawing public attention to the plight of our innocent Leader, his wife, and hundreds of other IMN members that have remained unjustifiably in detention for more than nine months. The mental and the psychological agony to which millions of IMN members have been subjected to is phenomenal.

It is with the authoritative pronouncement of the Court of Appeal on the fundamental right of Nigerians to freedom of assembly and expression through peaceful rallies and protests that we continue to exercise our rights even in the face of state-sponsored brutality against us.

The Federal Government needs to be called to order to restrain the police and other security agencies from further harassing or intimidating Free Zakzaky protests. The President should realise that democracy allows alternative views, dissent, protest, marches, rallies and demonstrations. Hence, rally or placard carrying demonstration is a form of expression of views on current issues affecting both the government and the governed alike in a sovereign State. It is a trend recognised and deeply entrenched in the system of governance in civilised countries. It is both primitive and retrogressive to forcefully disrupt peaceful agitations such as ours.

We therefore call on the international community, as a matter of urgency, to impose sanctions, travel bans and freezing of foreign accounts of top political, military and security men who have featured prominently on the blatant rights abuse of their citizens such as the Zaria massacre of December 2015, characterised by extra-judicial killings of thousand and more lives, arbitrary arrests, detention incommunicado without charges, denial of legal and medical access, abductions and mass graves. As a first step, the international community should also put pressure on the government to speedily release Shaikh Zakzaky for urgent medical attention.