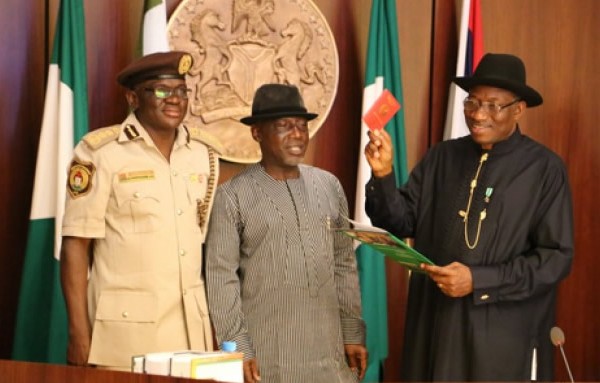 Controversial Minister of Interior, Abba Moro, has devised a fresh scheme to fleece Nigerians. Using the increase in the new fees charged for the Nigerian passport, he has formulated a new policy that would effectively extort billions from unsuspecting Nigerians every month.

Beginning in August, the minster illegally contracted a freight forwarding and courier company, Greater Washington Limited, to deliver passports to applicants at the cost of N2,000.

The fee has been built into the new fee of N19,550 charged for the Nigerian passport and every applicant is forced to pay the money whether she/he wants the service or not.

The new payment regime for the Nigerian passport commenced on August 1, when the federal government also rolled out the new 64-page passport for frequent travellers. Where the 32-page passport used to cost N8,750 for all Nigerians under the old regime, with the new rate, applicants aged 1 to 18 and 60 and above would now be the only ones allowed to pay the old rate of N8,750. All other applicants (aged 18 to 60) would pay N15,000.

This was announced by the Minister of Interior at the launch of the 64-page passport by President Goodluck Jonathan at the Presidential Villa on July 29. The minister said further that the 64-page passport would cost N20,000 while change of data for reasons other than marriage or divorce would attract a N30,000 processing fee.

What Moro failed to tell his audience, including President Jonathan, is that Nigerians would now be forced to pay N2,000 to have their passports delivered to their homes.

Our investigations indicate that the total amount paid for the passport is N15,600, including bank charges.

An applicant is expected to indicate if he prefers to pick up his/her passport personally or would like it delivered. However, whatever option is chosen, the N2,000 for delivery has to be paid. Many applicants who say they would pick up their passports because they do not want any delay are still being made to pay the N2,000.

By the new system, after filling the application forms and making necessary payments, applicants are expected to go to the Greater Washington office at the passport office where the application is made to submit contact address for the delivery of their passports.

However, there are many things wrong with the entire arrangement of having a private company deliver passports to citizens.

First, from icirnigeria.org investigations, the minister did not go through due process in awarding the contract to deliver passports to applicants to Greater Washington as there was no advertisement or bidding process. The company was exclusively the minister’s choice.

Also, what is now being made to look like a government policy did not arise as a result of a need because Nigerians did not demand that their passports be delivered to them in their homes. Sources in NIS passport offices said that there were never any complaints from applicants about personally picking up their passports.