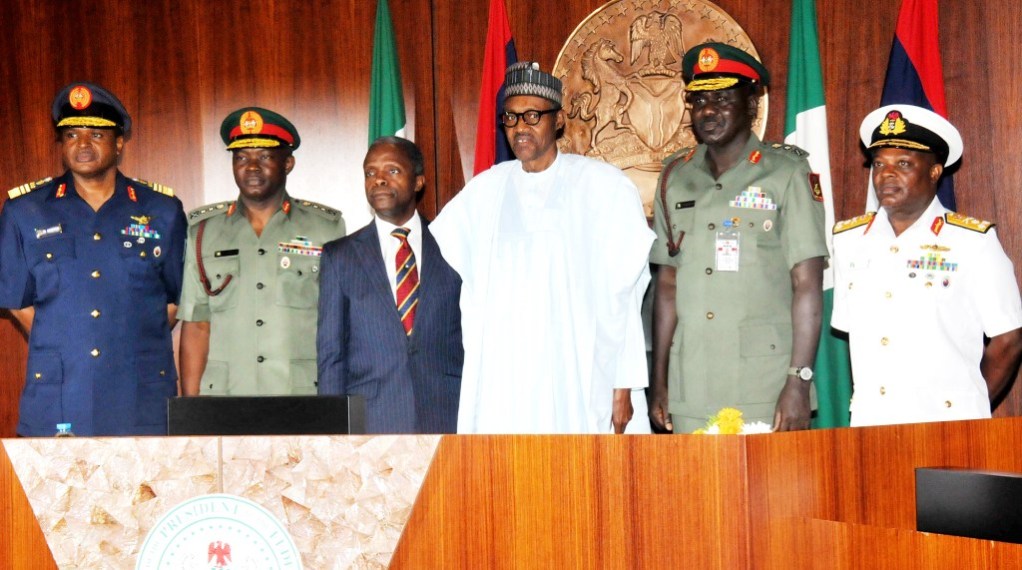 Nigeria’s National Security Adviser (NSA), Babagana Monguno, has revealed that funds running into billions of naira meant for the procurement of arms and ammunition under the past service chiefs were unaccounted for.

The NSA made the revelation in a BBC Hausa interview on Friday.

His revelation came more than one month after President Muhammadu Buhari replaced the service chiefs headed by Gabriel Olonishakin, the former chief of defence staff.

They were replaced on January 26.

The former service chiefs were recently rewarded with ambassadorial appointments by the president. The Senate has since cleared them despite the petitions against them.

No money, no arms

In what rather seemed to be a shocker, Mr Monguno, a retired major general, revealed that neither the money nor the arms were on ground upon resumption of the new service chiefs.

He also said he was not accusing the former service chiefs, but insisted nobody has the information about the whereabouts of the money.

“Now that he (President Buhari) has brought new people (service chiefs), hopefully they will devise some ways… I’m not saying the former service chiefs diverted the money, but the money is missing. We don’t know how, and nobody knows for now,” he said.

“The president will surely probe this matter. As we speak, the Nigerian Governors’ Forum too is also wondering where all the money went. I can assure you the president takes issues of this nature seriously.

“The fact is that preliminary investigation showed the funds are missing and the equipment is nowhere to be found.

“When the new service chiefs assumed office, they also said they did see anything on ground,” the NSA said.

In February last year, the NSA and the immediate past Army Chief, Tukur Buratai, had a major face off when the former took sides with the late Chief of Staff, Abba Kyari, to humiliate the NSA.

Mr Buratai, at the time, ordered the withdrawal of top army officers attached to the Office of the NSA without replacements.

A total of 23 army officers serving at the ONSA were posted out without being replaced in two batches on February 4 and 10. Mr Monguno was away from the country at the time of the postings.

The NSA rejected the entire exercise as a charade upon his return and ordered the personnel to disregard Mr Buratai’s directive and remain in place.

Mr Buratai himself ignored the NSA and refused to rescind his decision.