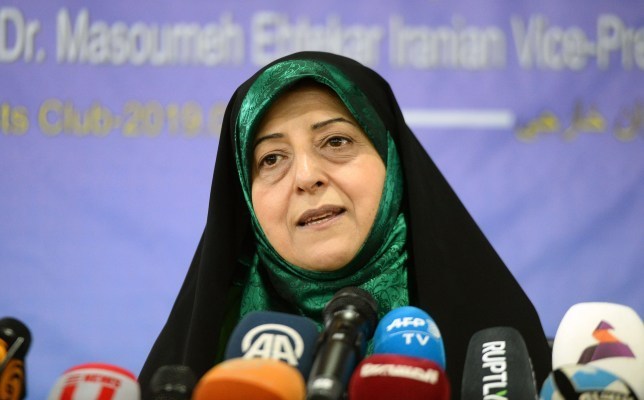 One of Iran’s vice presidents, Massoumeh Ebtekar, has tested positive to the coronavirus disease.

Ms Ebtekar oversees women’s affairs. She is currently one of the latest top officials to be infected in Iran as the spread of the new coronavirus disease appeared to accelerate in the country.

Ms Ebtekar, a former spokeswoman for students who took 52 Americans hostage at the US embassy in Tehran in 1979, is being treated at home and members of her team have been tested, state news agency, IRNA, reported.

Also, a video posted by Fars news agency said the head of parliament’s national security and foreign affairs committee, Mojtaba Zolnour, has also contracted the virus, and was in self-quarantine.

The cleric is a deputy for the Shiite holy city of Qom in central Iran where the country’s first cases were detected.

Earlier, the deputy health minister, Iraj Harirchi, who is also the head of the government’s coronavirus task force, had tested positive to the disease.

Iran is fast becoming a hot-spot for the disease outbreak in the Middle East as the coronavirus epidemic has claimed 26 lives, the health ministry announced.

The ministry spokesman, Kianoush Jahanpour, told a news conference that the tally of infections had risen to 245 with 106 more cases confirmed — the highest number for a single day since Iran announced its first infections on February 19.

The country currently has the highest death toll from the virus outside China, which is the epicentre for the disease.

Although Iran has refused to adopt the quarantine measures to curb the spread of the disease in the country, the Iranian authorities on Wednesday announced restrictions on domestic travel for people with confirmed or suspected infections.

The restrictions might be coming a bit late as many neighbouring countries have been reporting cases from travellers from Iran.

Iran’s neighbours have closed their borders. The UAE, Kuwait, Bahrain, Lebanon, Afghanistan, Pakistan and Estonia in northern Europe all recorded new cases of the virus in people travelling from Iran.

The Iranian government has placed new regulations on access to major Shiite pilgrimage sites, including the Imam Reza shrine in second city Mashhad and the Fatima Masumeh shrine in Qom.

“Visitors to the shrines will be allowed to visit on condition they are provided with hand-washing liquids, proper (health) information, masks,” Health Minister Saeed Namaki said.

“They must not gather together in groups but just pray and leave,” he said.

The authorities have also announced the cancellation of the main Friday weekly prayers in Tehran, Qom and Mashhad as well as in the capitals of 22 of Iran’s 31 provinces and other infected areas.

Also, school closures have been extended in affected areas and universities are to remain closed for another week starting from Saturday.

“All of these decisions are temporary and if the situation changes, we might intensify or ease them,” Mr Namaki said.

Although Iranian authorities claim they are in control of the outbreak, international health experts have expressed concern about it’s handling of the outbreak.