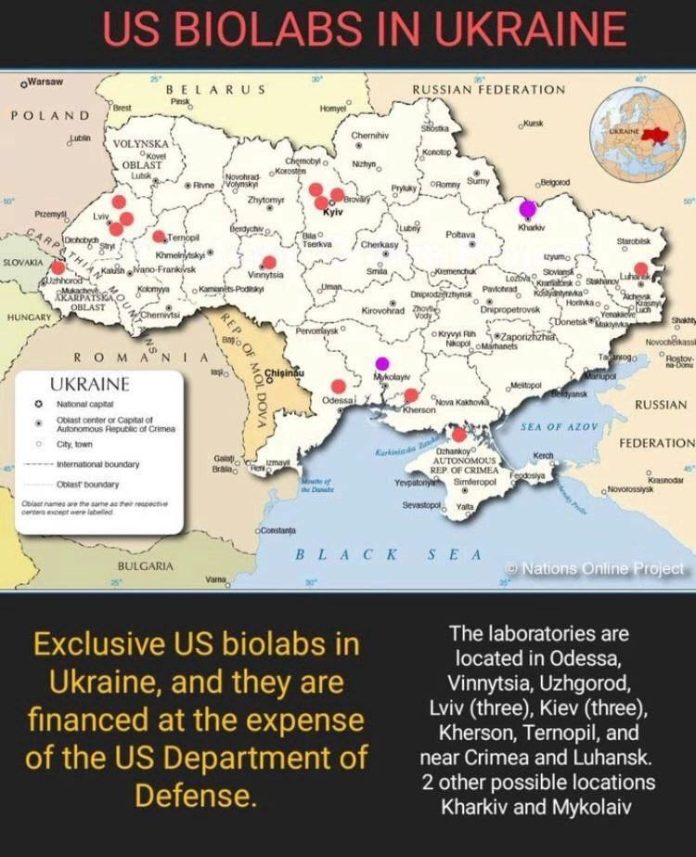 Evidence online suggests the United States is scrambling to delete records of a million dollar sponsored bioweapons program in Ukraine, operated by no other than Eco Health Alliance, the same culprits at the center of the Wuhan lab Coronavirus lab leak debacle.

Just in the last day they removed all the PDF files from the embassy website here:

Millions of dollars were donated by the US Department of Defense for the pathogen labs, according to the archived files.

Examples of pages from the archived files:

Spymabrouk @SpyMabrouk26: The good news is they are still archived:

These labs are co-run by Fauci's EcoHealth Alliance and rumor is Russia's entire military operation right now is unofficially to either secure and/or destroy these labs and gather evidence.https://t.co/tMdQCo0jqDhttps://t.co/chm8ZhPaDR

As Russian troops entered Ukraine, the government in Kiev ordered the “emergency destruction” of pathogens including plague and anthrax at US-funded laboratories near the Russian border, the Ministry of Defense in Moscow claimed on Sunday. Earlier rumors that the Russian military was targeting US-run biolabs were written off as conspiracy theories, but the ministry has promised to back up its claims with documents.

“We have received documentation from employees of Ukrainian biolaboratories on the emergency destruction on February 24 of especially dangerous pathogens of plague, anthrax, tularemia, cholera and other deadly diseases,” read a statement from the ministry.

The statement accused the “Kiev regime” of conducting an “emergency cleansing” to hide evidence of the supposed biological weapons program, which the ministry claimed was funded by the US, and involved the production of “biological weapons components” at at least two laboratories in the cities of Poltava and Kharkov, both of which have seen intense fighting between Russian and Ukrainian forces in recent days.

The documents published by the ministry purportedly include an order from the Ukrainian Ministry of Health to destroy the pathogens, and lists of the germs in question.

RT can not independently verify the authenticity of these documents. Russia’s Defense Ministry said that they are currently being analyzed by radiation, chemical and biological protection specialists.

“In the near future we will present the results of the analysis,” the ministry said, adding that it believes the documents will prove that Ukraine and the US were violating Article 1 of the UN Biological Weapons Convention. The US, Ukraine and Russia are among more than 180 parties to this treaty, and under Article 1 of the agreement, all parties agree “never under any circumstances to develop, produce, stockpile, acquire, or retain” biological weapons.

As of the moment of this article’s publication, Washington has not commented on the ministry’s claims, and neither has Kiev.

In the initial days of Russia’s military offensive last month, claims circulated online that Russia was targeting western-funded biolabs with missile strikes. These allegations were never verified and were derided by western sources as conspiracy theories, although the Pentagon has publicly stated that it works with the Ukrainian government to “consolidate and secure pathogens and toxins of security concern in Ukrainian government facilities,” for “peaceful research and vaccine development,” according to the US embassy in Kiev.

While the US is planning to increase its military presence in Eastern Europe to “protect its allies against Russia”, internal documents show what American “protection” in practical terms means.

The Pentagon has conducted biological experiments with a potentially lethal outcome on 4,400 soldiers in Ukraine and 1,000 soldiers in Georgia. According to leaked documents, all volunteer deaths should be reported within 24 h (in Ukraine) and 48 h (in Georgia).

Both countries are considered the most loyal US partners in the region with a number of Pentagon programs being implemented in their territory. One of them is the $2.5 billion Defense Threat Reduction Agency (DTRA) Biological engagement program which includes research on bio agents, deadly viruses and antibiotic-resistant bacteria being studied on the local population.

Project GG-21: “All volunteer deaths will be promptly reported”

The Pentagon has launched a 5-year long project with a possible extension of up to 3 years code-named GG-21: “Arthropod-borne and zoonotic infections among military personnel in Georgia”. According to the project’s description, blood samples will be obtained from 1,000 military recruits at the time of their military registration physical exam at the Georgian military hospital located in Gori.

The samples will be tested for antibodies against fourteen pathogens:

The amount of blood draw will be 10 ml. Samples will be stored indefinitely at the NCDC (Lugar Center) or USAMRU-G and aliquots might be sent to WRAIR headquarters in US for future research studies. Walter Reed Army Institute of Research (WRAIR) is the largest biomedical research facility administered by the U.S. Department of Defense. The results of the blood testing will not be provided to the study participants.

Such a procedure cannot cause death. However, according to the project report, “all volunteer deaths will be promptly reported (usually within 48 h of the PI being notified)” to the Georgian Military Hospital and WRAIR.

According to the GG-21 project report, “all volunteer deaths will be promptly reported” to the Georgian military hospital and WRAIR, USA.

The soldiers’ blood samples will be stored and further tested at the Lugar Center, a $180 million Pentagon-funded facility in Georgia’s capital Tbilisi.

The Lugar Center has become notorious in the last years for controversial activities, laboratory incidents and scandals surrounding the US drug giant Gilead’s Hepatitis C program in Georgia which has resulted in at least 248 deaths of patients. The cause of death in the majority of cases has been listed as unknown, internal documents have shown.

The Georgian project GG-21 has been funded by DTRA and implemented by American military scientists from a special US Army unit code-named USAMRU-G who operate in the Lugar Center. They have been given diplomatic immunity in Georgia to research bacteria, viruses and toxins without being diplomats. This unit is subordinate to the Walter Reed Army Institute of Research (WRAIR).

Documents obtained from the US Federal contracts registry show that USAMRU-G is expanding its activities to other US allies in the region and is “establishing expeditionary capabilities” in Georgia, Ukraine, Bulgaria, Romania, Poland, Latvia and any future locations. The next USAMRU-G project involving biological tests on soldiers is due to start in March of this year at the Bulgarian Military Hospital in Sofia.

Project UP-8: All deaths of study participants should be reported within 24 h

The Defense Threat Reduction Agency (DTRA) has funded a similar project involving soldiers in Ukraine code-named UP-8: The spread of  Crimean-Congo hemorrhagic fever (CCHF) virus and hantaviruses in Ukraine and the potential need for differential diagnosis in patients with suspected leptospirosis. The project started in 2017 and was extended few times until 2020, internal documents show.

According to the project’s description, blood samples will be collected from 4,400 healthy soldiers in Lviv, Kharkov, Odesa and Kyiv. 4,000 of these samples will be tested for antibodies against hantaviruses, and 400 of them – for the presence of antibodies against Crimean-Congo hemorrhagic fever (CCHF) virus. The results of the blood testing will not be provided to the study participants.

There is no information as to what other procedures will be performed except that “serious incidents, including deaths should be reported within 24 hours. All deaths of study subjects that are suspected or known to be related to the research procedures should be brought to the attention of the bioethics committees in the USA and Ukraine.”

DTRA has allocated $80 million for biological research in Ukraine as of 30 July 2020, according to information obtained from the US Federal contracts registry. Tasked with the program is the US company Black &Veatch Special Projects Corp.

Another DTRA contractor operating in Ukraine is CH2M Hill. The American company has been awarded a $22.8 million contract (2020-2023) for the reconstruction and equipment of two biolaboratories:  the State Scientific Research Institute of Laboratory Diagnostics and Veterinary-Sanitary Expertise (Kyiv ILD) and the State Service of Ukraine for Food Safety and Consumer Protection Regional Diagnostic Laboratory (Odesa RDL).

Furthermore, according to the US-Ukraine Agreement, claims by third parties for deaths and injuries in Ukraine, arising out of the acts or omissions of any employees of the United States related to work under this Agreement, shall be the responsibility of Ukraine.

I am an independent journalist and do not work for governments or corporations. If you want to support my work, please go to the Donation page or Become Volunteer. Thank you! If you want to follow me on Telegram, please subscribe to Arms Watch Telegram channel using the link: https://t.me/armswatch