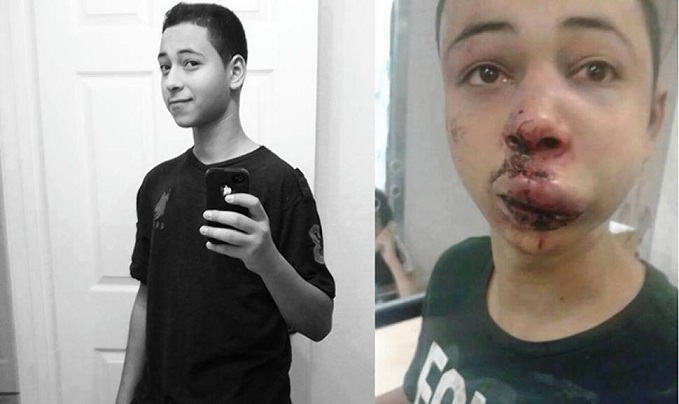 A U.S. teen mourning the apparent payback murder of a Palestinian cousin was beaten and arrested by Israeli police in the days before the slain boy’s funeral, officials said.

Tariq Khdeir, 15, was visited while in custody Saturday by an official from the American consulate, the State Department announced in a statement.

“We are profoundly troubled by reports that he was severely beaten while in police custody and strongly condemn any excessive use of force,” said spokeswoman Jen Psaki.

“We are calling for a speedy, transparent and credible investigation and full accountability for any excessive use of force.”

Tariq’s parents showed The Associated Press photos of the teen’s badly bruised and swollen face, and his father insisted the youth — a student in Florida — was not involved in any violence.

But an Israeli police spokeswoman said Tariq resisted arrest and attacked police officers during the protest prior to the funeral for his 16-year-old cousin, Mohammed Abu Khdeir.

Palestinian officials charged Saturday that Mohammed was burned alive in apparent retaliation for the killings of three Israeli seminary students.

Tariq’s mom, Suha Abu Khdeir, said her son lives in Florida but was visiting Palestine for the summer when he was beaten up and arrested.

The news sparked another wave of violent protests, with the U.S. quickly calling upon both sides to dial down the attacks.

An autopsy concluded that Mohammed, whose death led to bloody rallies in his East Jerusalem neighborhood, suffered burns over “90% of his body,” said Palestinian Attorney General Abdelghani al-Owaiwi.

“The results show he was breathing while on fire and died from burns and their consequences,” he said, adding that burns were found inside Mohammed’s lungs, bronchial tubes and his throat.

The body also showed evidence his assailants bashed him in the right side of his head with a rock or another hard object, Owaiwi said.

The teen’s charred corpse was found in a forest Wednesday after he was kidnapped near his home.

Clashes between Palestinian protesters and Israeli police have been rampant.

Israeli leaders have widely condemned Mohammed’s killing, and Prime Minister Benjamin Netanyahu vowed those responsible would be brought to justice.

The violent clashes were some of the most brutal Jerusalem has seen in years.

Meanwhile, Palestinian militants fired two rockets toward the southern city of Beersheba — deeper into Israel than any other attack in the current round of violence.