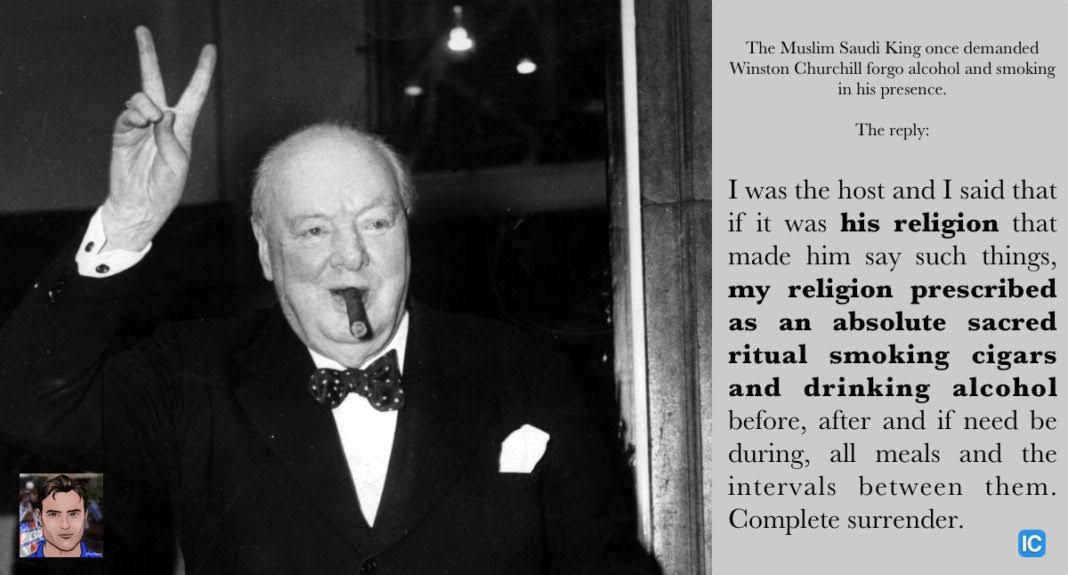 To understand that Western emphasis on human rights is at best a fig leaf to do business with autocrats whose rule is based on repression, contrast Winston Churchill’s encounter with Mohammed bin Salman’s grandfather, King Abdulaziz, with British prime minister Theresa May’s recent talks with the crown prince.

Meeting the king for lunch in Cairo in 1945, Mr. Churchill suggested that it was the “religion of his majesty to deprive himself of smoking and alcohol,” a reference to the king’s adherence to a puritanical strand of Islam that has dominated the kingdom since its founding in 1932.

Mr. Churchill, however, made clear that the king’s beliefs would not deter him from enjoying his smokes and drinks in the monarch’s presence. The prime minister’s rule of life “prescribes as an absolutely sacred rite smoking cigars and also the drinking of alcohol before, after, and if need be during all meals and in the intervals between them,” Mr. Churchill said.

Enjoying tobacco and alcohol is certain not to have featured in Ms. May’s talks this week with Prince Mohammed. Human rights and the humanitarian cost of Saudi Arabia’s ill-fated military intervention in Yemen did.

In contrast to Mr. Churchill, who, perhaps insensitively and arrogantly, refused to compromise on his principles and pleasures, Ms. May’s statements were no more than words in what has become a ritual in interactions between democratic and autocratic leaders. The autocrats understand democrats’ need to maintain a fig leaf. The public admonishment of their tarnished human rights records is a small price to pay for the ability to conduct political and economic business.

The contrast between the two encounters is particularly significant in an environment in which abuse of human rights is on the rise and authoritarian and autocratic rule is spreading its wings across the globe from China to once liberal democracies. Democracy is on the defense.

It raises the question whether the refusal of democracies to stand up for their principles and pay a price will contribute to their demise and brutalization in a world in which the lessons of World War Two genocide and principles of good governance in warfare can be ignored with impunity. Russia and Iran-backed Syrian president Bashar al-Assad’s gassing and starvation of non-combatant Syrian civilians is a case in point.

Ms. May’s fig leaf approach to standing by basic democratic principles is but the latest incident in a long-standing Western willingness to pay a heavy price for sleeping with the devil in a bid to gain short-term geo-political and economic advantage.

Guilt is widespread. Its not just governments. The same is true for non-governmental organizations such as international sport associations who for decades tolerated pre-modernity curtailing of women’s sporting rights in countries like Saudi Arabia and Iran by restricting their criticism to words rather than deeds.

Saudi journalist Jamal Khashoggi and author and long-time Saudi-watcher Robert Lacey noted in The Guardian that “the crown prince doesn’t listen to Saudis – why would he listen to Theresa May?”

Mr. Khashoggi, long closely associated with Prince Turki al-Faisal, a former head of Saudi intelligence and ambassador to Britain and the US, who often voices opinions Prince Mohammed does not want to do so publicly, went into voluntary exile last year on the eve of the crown prince’s power and asset grab under the mum of an anti-corrup0tion campaign.

One irony of Ms. May’s approach in her talks with Prince Mohammed is the fact that the kingdom is an exemplary case study of the price that democracies have paid for their toothless objections to a long-standing Saudi worldview that was intolerant, supremacist, and anti-pluralistic.

To be sure, Prince Mohammed has begun to shave off the rough edges of that worldview with his social and economic reforms but has yet to convey his willingness to achieve a clean break.

Holders of tickets for a concert in Jeddah by Egyptian pop sensation Tamer Hosny were recently surprised to receive vouchers that warned that “no dancing or swaying” would be allowed at the event. “No dancing or swaying in a concert! It’s like putting ice under the sun and asking it not to melt,” quipped a critic on Twitter.

If anything, Prince Mohammed’s reforms have been underwritten by repression of any form of dissent.

Anti-death penalty group Reprieve reported that Saudi Arabia’s execution rate had doubled since Prince Mohammed was appointed crown prince eight months ago. It said 133 people had been executed since June 2017 compared to 67 in the preceding eight months.

Equally fundamentally, the world is still reeling from at times short-sighted, opportunistic Western support for the export of Saudi-inspired Sunni Muslim ultra-conservatism and at others a willingness to ignore its impact on Muslim communities across the globe.

The same can be said for support of secular autocracies like the regime of Egyptian general-turned-president Abdel Fattah Al Sisi, whose repression, brutality and failure to deliver public goods and services offer extremism a fertile breeding ground.

It is also true for states like Baathist Syria and Iraq that fell into the Soviet orbit during the Cold War, with Iraq. after the demise of the Soviet Union, enjoying US support during its war against Iran in the 1980s.

Geo-strategist Robert D. Kaplan, writing in Foreign Policy, argued that Syria and Iraq had descended into the Middle East and North Africa’s worst mayhems that have caused enormous human suffering and cost the international community significantly in political, diplomatic, and security terms because they were artificial, colonial-era geographic constructs. They lacked the civilizational history, centuries of some kind of statehood, and deep-seated identities that have helped keep Egypt or Tunisia territorially intact.

In South Asia, the United States went during the era of conservative Pakistani president Zia ul-Haq and the US and Saudi-backed war against the Soviets in the 1980s waged by Afghan mujahedeen as far as to distribute schoolbooks that propagated Saudi-inspired jihad and precepts of ultra-conservatism. In doing so it played havoc with Pakistan, a country that since its birth has struggled with its identity.

Western democracies ignored the fact that Saudi Arabia invested heavily over decades to push its austere worldview as an anti-dote to post-1979 Iranian revolutionary zeal.

While not the only factor, the Saudi campaign created an environment in Pakistan and elsewhere in which militant Islam flourished, societies became ever more conservative and intolerant, and political violence increased.

Western democracies as well as others, including the kingdom, are paying a high price in terms of people’s lives and vastly expanded security to counter extremism and political violence.

Its an open debate whether policies that had been built on democratic values rather than support for autocracy and intolerant worldviews could have achieved similar geopolitical victories such as the defeat of the Soviets in Afghanistan at a lower cost and a reduced threat to those values.

What is certain, however, is the fact that the fallout of the failure to stand up for democratic values comes at an ever-steeper cost and uncertainty of how the pendulum will swing.

The unanswered question is whether in terms of cost-benefit analysis short-term hits resulting from adopting a principled stand may ultimately be a more reasonable cost and produce greater long-term benefit than the price of dealing with the fallout of policies that effectively ignore democratic principles and ultimately are likely to produce ever greater threats.

Dr. James M. Dorsey is a senior fellow at the S. Rajaratnam School of International Studies, co-director of the University of Würzburg’s Institute for Fan Culture, and co-host of the New Books in Middle Eastern Studies podcast. James is the author of The Turbulent World of Middle East Soccer blog, a book with the same title as well as Comparative Political Transitions between Southeast Asia and the Middle East and North Africa, co-authored with Dr. Teresita Cruz-Del Rosario,  Shifting Sands, Essays on Sports and Politics in the Middle East and North Africa, and the forthcoming China and the Middle East: Venturing into the Maelstrom,