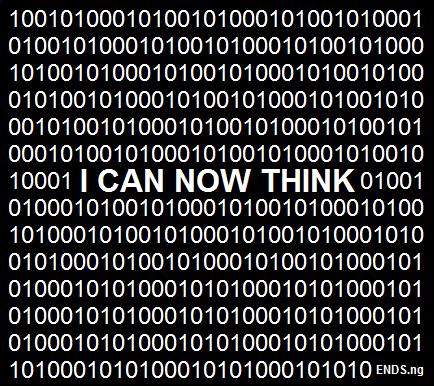 Welcome to 2014. While many of us in developing nations are embroiled in trivial and non sequitur ethnic, religious and political/governance battles, there is a new and most powerful ‘race’ that is slowly but steadily conquering the world and promising to deprive us of what we yet have today, and the job security we aspire for.

Knowing that most criminality and terror is rooted in competition for opportunity, land and the pursuit of happiness, I dare say we are lucky… that we have not yet been allowed to advance, thanks to our frictions, and as such do not yet critically experience this most serious and unavoidable new competitive threat to humanity. We can barely cope with human-human competition, talk less the machine revolution.

The job loss in America, as much as it is blamed on simple and rather comforting explanations like, increased global competitiveness, exporting jobs, inept administrative policies and the like; is highly attributable to this new ‘race’ of monsters.

It is the machines; the blessing of advancing technology, creating a race of gadgets that are surely and steadily replacing jobs, primarily in the ‘developed’ world and eventually everywhere.

UPS, the world’s largest package delivery company is also researching the utility of drone technology to deliver packages. All these are in the test phase and are expected to fully roll out within the next 4 years.

Already in the biggest stores like Wal-Mart, machines have been replacing most human checkout kiosks/tills. And the thing about these automatic checkout points is their humanness. They, unlike simple computers of the past, interact in conversation style with the customer. The machines say, ‘welcome,’ ‘please scan your item;’ ‘please put it in the bag.’ And wish you off with a friendly bye-bye, ‘thanks for shopping with us.’

By the end of 2014, there will be 430,000 self-checkout points in Wal-Mart stores around the United States. That is almost half a million jobs lost in the US. It takes only one attendant to supervise up to six checkout lanes.

The same trend has been occurring in BJ’s, CVS, M&S and practically all major retail stores worldwide. This equals millions of every day staff who are being laid off by a better ‘race,’ the race of machines. US president Barack Obama can simply not catch-up with this rate of job replacement by machines that are cheap to operate, do not require health-care, do not complain, are always punctual and are purchased only once for a fraction of the yearly wage of a human, and work continuously, no pain, no lunch-break, no monthly cycle, no pregnancy, no picking-up kids, no leave; requiring only occasional visits by technicians.

But it gets even worse—for us mortals, that is.

It’s not only low skill labor that is at risk of replacement by machines, but practically all types of professions, bar none.

Our years of interactions through machines, like the computer-internet, our cell phones, and all other devices, has provided an invaluable pool of information about human interaction that is being mined and researched on by Google, faceBook and other central corporations.

Do not think you are so unique, or your reasoning is peculiar to human beings and not replaceable with machines. Ever spoke to an automated machine on the phone before? Think about how these have advanced over the years, also reducing several phone desk staff with single automated responders which interact with you and try their best to resolve your problem before finally transferring you to a live agent. As time goes on, these automatic telephone responders are being developed to handle more and more in conversation style with customers.

I must interject, at this time, that the only thing we (man) have up on machines is a soul. But that’s a whole other conversation.

Google CEO Eric Schmidt is excited about the possibilities and what he is achieving with quantum computing. He is on a mission to develop technologies to replace virtually all human endeavors. He projects practically all careers will be replaceable in 4-9 years.

It’s rather quite simple. Introduce a quantum calculating computer to a physician setting. First load it with all the medical text book information; then allow it to digest 1,000,000 typical doctor patient interactions, with questions and doctor prescriptions. The result will be a computer that can replace a physician.

You think this is extreme? Well, it has already been developed. Did you watch the Jeopardy-bot, IBM’s Watson, “cognitive computer,” which was able to defeat the world’s smartest competitor in the tough verbal question show? Indiana University researchers demonstrated that a new computer program was 42% better than doctors at both diagnosing and treating health conditions. And the machines ‘charge’ one third what human doctors charge for the same service. Start thinking of the “Doctor App” on your Android or iPhone soon, which will replace 90% of clinic visits.

We are talking about AI (Artificial Intelligence); which is in its final stages of development. These AI machines can replace almost every job. Computers that can think, and perhaps think better than you, in addition to having a 1000xs better retentive memory capacity. Today these machines are being introduced not yet to replace doctors, but to complement them and reduce their work load.

The Robo-Doctor kiosk which has been introduced at Wal-Mart locations in America is a health-care screening machine which interacts with patients and asks relevant questions, gathering standard health-care information that physicians, nurses or other health-care staff usually retrieve, including height and vision tests and then giving basic health-care advice and recommending specialist care. It starts with these, and then with the rate of advancement of technology, before we know it, thousands of health-care professional jobs will be replaced.

And if medical jobs are at risk, then what field is safe? Engineering? AI’s can produce hundreds of technical designs and fixes per second. It will all depend on the software and upgrades you can afford to purchase from AI developers like Google; developed thanks to the invaluable information our simple interactions on the internet, like ‘liking’ beautiful buildings, cars and clothes, to engineers actual designs uploaded into computer clouds, provide.

And they make sense. Why hire six Engineers, when you can hire two and purchase an AI that churns out 100s of models per minute?

The challenge of the machines is extremely wide. You only have to imagine and do a quick search to see what field still promises job security. Bank tellers have been replaced with automated cash machines. Mechanized farming allows 4 farmers to replace 400. Even Taxi drivers and chauffeur services are not safe as driver-less cars are in full development and being tested by major companies.

What of our emotional engagements? When you send a text to a loved one, what is your guarantee that the response you got from their phone was thought of and sent by them? What if and when our phones have software that recognizes our patterns and can be put on autopilot when we sleep for instance or are busy, to respond with our usual chat pattern with old and new acquaintances, possibly screening them for us and only forwarding those that they ‘think’ might strike our interest or have emergency needs, to us to continue the chat?

The world is changing. In Africa, things may not yet have developed or advanced to this level, but we do share the risks and need to take advantage of the opportunities. At this time, where we do not face such job replacement by computers, African nations should have a job boom. Rather there already is a critical shortage, with great percentages of our youth, unemployed, while technology for chaos is advancing likewise and readily available. This is a serious problem that must be critically analyzed, because when the machine ‘race’ joins our present bloody competition and erodes more jobs in Africa as it has already in much of Europe, what will be the outcome in terms of jobless terror?

For those of us who work or seek careers abroad, one must consider long-term job security when selecting a profession. You just cannot go wrong with computers and entertainment. Unfortunately I can’t say the same for marketing, manufacturing, and even professional careers like medicine, law and engineering. In your career field, you want to make yourself indispensable. Someone, a researcher or computer skilled programmer/developer who will still be employed till the tail end of the machine race replacement era.

Google’s Eric Schmidt in a recent Zeitgeist meeting excitedly described social robots in the development phase. Robots he is anxious to send in his stead to public functions (in the “dangerous night”), that will be able to interact; smile, talk and think just like him, and then come home to plug into a system and upload their engagements of the night for his perusal the next day.

These changes are projected in the next four years. There are so many things to think about.