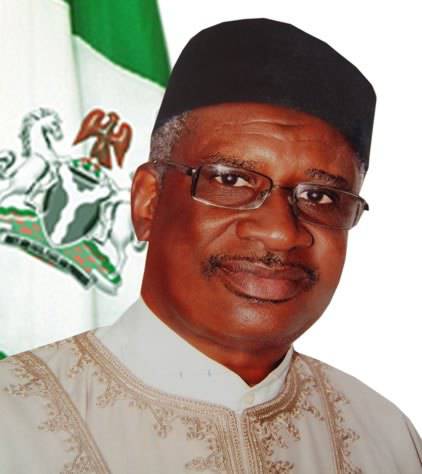 President Goodluck Jonathan’s choice for reelection campaign director, Bello Haliru Mohammed, a former minister and once an acting head of the ruling Peoples Democratic Party, is a confirmed bribe taker, indicted by a German court in 2007, PREMIUM TIMES can report today.
Mr. Mohammed, named Thursday to oversee Mr. Jonathan’s declaration and campaign for re-election, in a potentially tense political battle likely to pitch him against either former head of state, Muhammadu Buhari, or former Vice President Atiku Abubakar.
Messrs. Buhari and Atiku are vying for the presidential ticket of the opposition All Progressives Congress, APC.

The presidency has said Mr. Jonathan will pick his nomination form shortly and will formally declare a long-expected candidacy for the 2015 election, at a grand event early November.

That event will be overseen by an expansive Presidential Declaration Committee led by Mr. Mohammed, supported by a former senate president, Ken Nnamani, the Secretary to the Government of the Federation, Anyim Pius, and the president’s political adviser, Rufa’i Alkali.

Dozens of others drawn from the PDP, the National Assembly, the Executive Council of the Federation, and the PDP Governors’ Forum, are also members of the team.

But Mr. Mohammed’s appointment has revived a mind-boggling bribery case for which he and other senior officials of the Olusegun Obasanjo administration were indicted of by a German court in 2007.

In its October 4, 2007 ruling against Siemen AG, the Munich State Court named Mr. Mohammed as one of the recipients of 77 hefty bribes paid by Siemen officials in three countries- Nigeria, Russia and Libya.

The indictment, published in November 2007 by the United States-based Wall Street Journal, listed Mr. Mohammed, who at the time was the Minister for Communications as having received millions of Euros in bribes, alongside other Nigerian cabinet members, to allow the German Conglomerate a piece of the Nigerian telecoms market.

In all, the company paid more than 10 million euros to Mr. Mohammed, former telecommunications ministers, Tajudeen Olarewaju, Cornelius Adebayo and Haruna Elewi, as well as an unnamed Senator, an unnamed immigration officer, and the PDP, the court said.
Bello Haliru and President jonathan

He was appointed at a time the government was planning to privatise moribund state company, Nigerian Telecommunications Limited, NITEL. The court said as minister, Mr. Mohammed received 550,000 euros in kickback in July 2002 and another 150,000 euros in August 2003.

The court said Nigerian ministers under the Obasanjo government also received unspecified sums of money for the ruling PDP.

“According to the Munich court ruling, Edward Seidel, who headed Siemens’ operations in Nigeria earlier this decade, helped deliver many of the bribes to the final recipients,” the Wall Street Journal reported at the time.

“In August (2003), according to the (Munich) court, Mr Siekaczek and Mr Siedel funnelled a 150,000 euros bribe to Mr. (Bello) Mohammed, following a 550,000 euros payment the year before when he was still the Nigerian telecommunications minister,” the paper reported.

“The Munich court estimated that the roughly 12million euros bribes in Nigeria, Russia and Libya produced at least 200 million euros in ‘unlawful economic advantages’ for Siemens,” according to the paper.

Siemens, at the time, accepted responsibility for the misconduct of Mr. Siekaczek and agreed to pay 210 million euros in fines to the German government.

While Mr. Siekaczek was indicted, German prosecutors said they would not pursue action against non-German citizens who were identified as recipients of the bribes, leaving them to be sanctioned by their own governments.

But for more than seven years, Mr. Mohammed, and other recipients of the bribes, have escaped justice with two investigations by the Nigerian authorities yielding no indictments.

The former minister has instead been rewarded with choice appointments, serving as acting chairman of the ruling party, PDP and later as Nigeria’s defence minister.

The Independent Corrupt Practices and Other Related Offences Commission, ICPC, launched an investigation following the ruling of the German court, but punished no one despite former President Umaru Yar’adua famously vowing that “… there will neither be sacred cows nor a cover up for anybody found culpable of breaching the law”.

Separately, the Economic and Financial Crimes Commission, EFCC, investigated the scandal but failed to prosecute the main culprits amid claims the former minister admitted receiving the payments. Mr. Mohammed was later elected the deputy chairman of PDP, before being appointed the defence minister by President Goodluck Jonathan between 2011 and 2012.

On the website of PDP, no mention is made of the bribery scandal in Mr. Mohammed’s profile.

The party merely narrates its former chairman’s career dating before and after he joined the Nigerian Customs Service, where he rose to the rank of Comptroller General and retired in 1995.

After his retirement from service, he was appointed Commissioner, Revenue Mobilization Allocation and Fiscal Commission in 1999 from where he became minister.

It is unclear whether Mr. Jonathan is aware of corruption allegation against Mr. Mohammed. But the President is not known for any vigorous war against corruption. He famously recently said reports of corruption in Nigeria were exaggerated.

He is also not known for firing officials indicted for corruption.