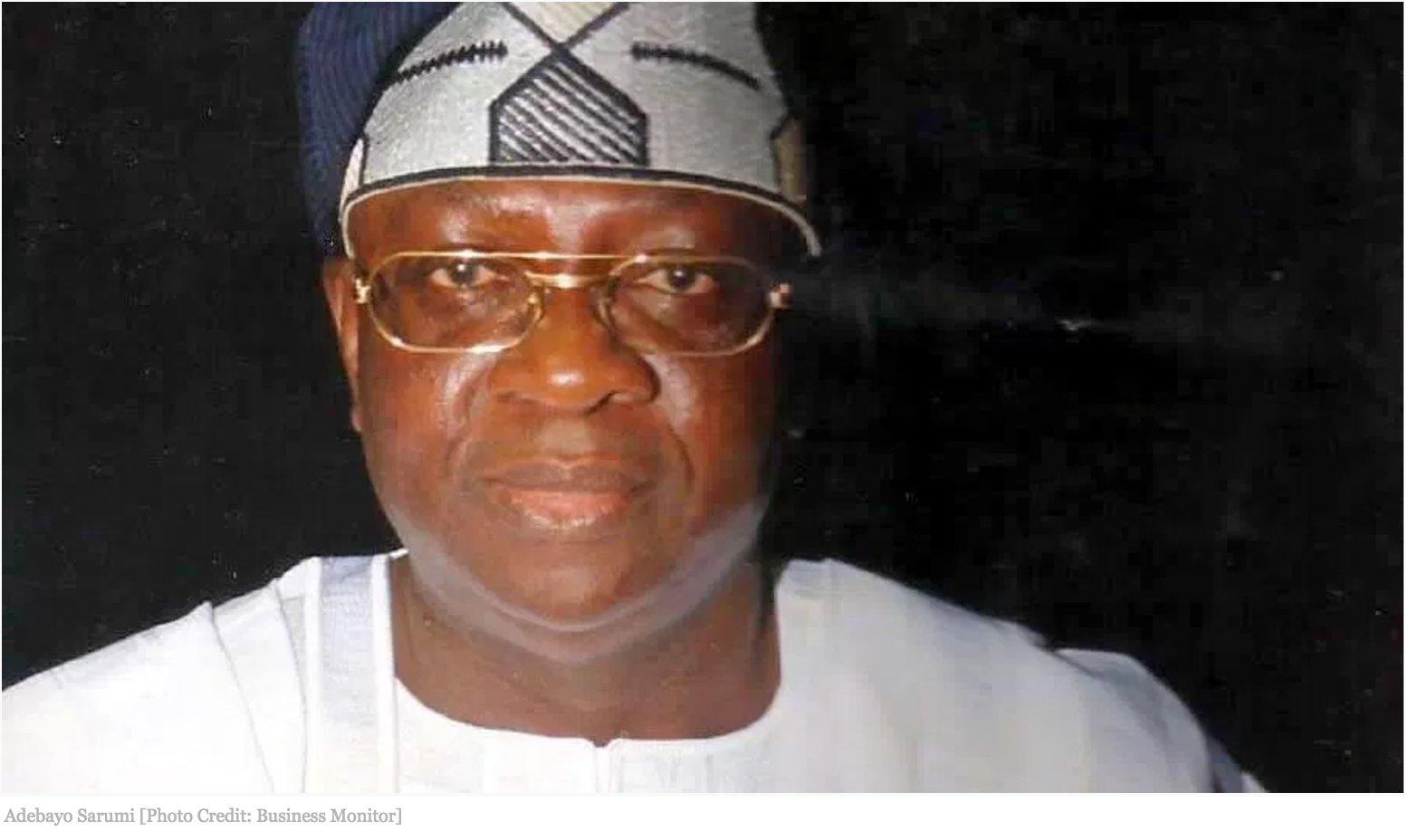 Three former top officials of the Nigerian Ports Authority and a former special adviser to President Goodluck Jonathan have been named in a massive foreign bribery scandal that has led to the conviction of a company and some of its top officials in Switzerland, PREMIUM TIMES can exclusively report today.

Dredging International Services (Cyprus) Ltd was sentenced to a fine of one million Swiss Francs and asked to refund 36 million Swiss Francs illegal profit after it was indicted for allegedly making illicit payments to a former Managing Director of the NPA, Adebayo Sarumi; a former Managing Director of NPA’s Eastern Ports, Felix Ovbude; a former Executive Director of Finance at the NPA, Abba Murtala Mohammed; and Daniel Afam-Obi, a former executive assistant to Sullivan Akachukwu Nwankpo who was ex-President Goodluck Jonathan’s special adviser on technical matters.

While Messrs Sarumi, Ovbude and Mohammed allegedly collectively received $2.6million in kickbacks, Mr. Afam-Obi was said to have been paid $157,000 for unknown reasons. Another $18million dollar was passed to companies in which some yet unknown Nigerian officials have interests.

Dredging International Services (Cyprus) Ltd is part of a consortium which formed The Bonny Channel Management Limited that in turn entered into a joint venture arrangement with the NPA to form The Bonny Channel Company saddled with “creating and maintaining a safe navigational passage for all marine users to and in the Eastern Ports of Bonny Island, Onne, Okrika and Port-Harcourt”.

The NPA holds 60 per cent equity in the JVC while The Bonny Channel Management Limited consortium (comprising Dredging International, Vinci, IPEM and Dapesa Limited) has the remaining 40 per cent.

Each year, NPA awards the company contracts worth $70million without any open or competitive bidding as required by Nigerian law, and the firm is believed to have so far cornered jobs worth at least N717 billion.
Dredging International is a subsidiary of the Belgian group, Dredging, Environmental and Marine Engineering NV (DEME), which specializes in petroleum infrastructure and dredging, and has a turnover of two billion euros and employs 4,600 people worldwide. The French company VINCI is one of its main shareholders.

In an indictment dated May 1, 2017, the Swiss Federal Prosecutor’s Office (MPC) said between 2006 and 2011, the company wired huge bribes to the companies in which Mr. Sarumi and his colleagues were beneficial owners.

Dredging had through two of its executives – Alexandre Maes (Chief Financial Officer) and Christian Van Meerbeeck (Chief Legal Officer) – entrusted the treasury of its Nigerian project to a Geneva-based asset management company, Driancourt & Cie, and its director, Alain Driancourt. It was this asset management company and its director that executed the complicated foreign bribery scheme on its behalf.

In arranging the illicit scheme, Mr. Driancourt of the asset management firm, documents show, set up three offshore companies: Berndale Trading Ltd, with accounts with Credit Suisse and EFG Bank in Geneva, as well as Bayhill Finance Ltd and Dacklin Trading Ltd, each with an account with EFG Bank. The accounts were regularly funded by Dredging International. The payment orders were given by Alexandre Maes and Christian Van Meerbeck, then executed by Alain Driancourt.

The bribe payments, investigators said, began in 2007 after the NPA refused to pay Dredging International $43 million for dredging work already done. To recover this amount, the company elaborately organized the payment of several million dollars to executives of the NPA and other officials in the hope that that would push them to act.

And for five years, as indicated above, more $20million were wired to companies in which the named Nigerian officials are believed to be beneficial owners as well as to firms whose real beneficial owners are yet to be determined (also listed above).

As required by Swiss laws, the bank Credit Suisse alerted authorities to these suspicious transfers in 2011, and an investigation immediately commenced. The investigation was initially entrusted to Prosecutor Félix Reinmann and then to Olivier Thormann.

Dredging International tried to justify the payments, with its lawyer, Marc Henzelin, telling investigators, “Our clients admit to having engaged intermediaries close to the government in 2007 to ensure the security of the local personnel in the Delta when there were serious threats to their lives (kidnappings, attacks and immobilizations of boats etc.).

“At the same time, our customers found themselves in a situation of near-constraint when the Nigerian Port Authority, contractually obliged to pay nearly $ 50 million to operators, blocked the payments due. DISC regrets that it chose this solution at the time and has fully cooperated with the Swiss criminal authorities.” The subsidiary of the DEME group has since set up an “OECD” compliance system since the beginning of the criminal procedure in 2011.

Despite that explanation, the Swiss Prosecution Office indicted the company and mandated it to pay a fine of 37million Swiss Francs. The company’s officials directly involved in the bribery scheme were also convicted, with authorities saying Alexander Maes and Christian Van Meerbeeck failed to “verify the economic background of the payments they were ordering, even though the company operated in a country where the risk of corruption was notoriously high.”

Christian Van Meerbeeck received a bonus of 800,000 euros over the period, of which 40,000 was in connection with the Bonny Channel project. He will have to reimburse 56,000 francs out of this sum, and pay 5,000 francs in procedural costs. He is also sentenced to 12 days fine of 210 francs with suspended sentence.

The asset management company, Driancourt & Cie, had earlier in August 2015 been ordered dissolved by regulatory authorities in Switzerland for its insufficient controls in view of the risks of corruption in Nigeria. Its director, Alain Driancourt, was also prohibited from practicing as a financial intermediary in the country.

The public prosecutor’s officers decided not to issue a compensatory fine against Mr. Driancourt in view of the bankruptcy of his company. He was however sentenced to 60 days fine of 150 francs per day with suspended sentence and will have to pay 1000 francs of procedural expenses.

Switzerland said it sought assistance from Nigeria and that the then Minister of Justice, Mohammed Bello Adoke, replied that there was no case for criminal prosecution.

Sources at the Economic and Financial Crimes Commission  (EFCC) confirmed the anti-graft agency received a request from Switzerland on the matter. “We interrogated the named individuals, did other investigations and then forwarded our findings to the Attorney General’s office for onward passage to the Swiss embassy,” one of the investigators who handled the matter told PREMIUM TIMES.

“The difficulty we had then was that the companies into which the monies were paid were offshore ones, and they had no bank accounts in Nigeria. However, we sent our report to the Attorney General but we had no idea what he told the Swiss. We also did not hear back from the Swiss since then.”

Mr. Adoke, who is wanted by the EFCC in connection with the Malabu Oil investigation, has been out of Nigeria since the end of his tenure in May 2015, and could not be reached to comment for this story. A source close to him, however, quoted the former minister as saying everything he did while in office was in compliance with Nigerian laws.

The incumbent Attorney General, Abubakar Malami, did not answer or return calls. Neither did he reply a text message sent to him.

The Managing Director of NPA, Hadiza Bala Usman, said she was not aware of the case, and that no one or agency had discussed the matter with her since she assumed duties at the Authority on July 18, 2016.

When contacted by telephone, Mr. Ovbude, who is a now managing consultant with Lagos-based Renaissance Consulting, first said, “I don’t know what they are talking about.” But when he was told that the company which paid the bribe had confessed, the former NPA official said, “I worked and many people worked. It’s one thing to say you are specifically in charge, but the issue can come up and you are exonerated.” When told that he was specifically mentioned in the charge and that Dredging International had been convicted, he said, “I am not told, I am not aware.”

Mr. Sarumi’s telephone failed to connect Friday and Saturday. But he later replied a text, saying he was traveling abroad and that our reporter should telephone him again at 2 p.m. Nigerian time on Sunday.

He kept that appointment, telling this reporter, “As far as I’m concerned, I am not aware of the matter you are talking about. I hope we were not named just because we represented NPA on the board of the joint venture company.”

He then requested PREMIUM TIMES to furnish him with documents detailing the indictments in Switzerland.

Mr. Afam-Obi is yet to answer questions sent to him via Facebook by our reporter while Mr. Mohammed could not be reached for comments.