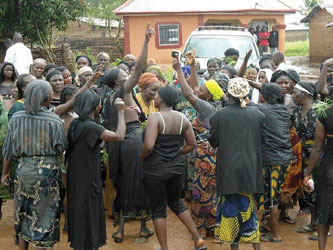 Around 10am penultimate Monday, armed men followed Governor Mukhtar Ramalan Yero of Kaduna State  in a convoy of vehicles. The wailing convoy snaked its way from Kaduna metropolis towards southern Kaduna.

Yero and his entourage were on their way to Fadan Karshi, in Sanga Local Government Area of Kaduna State to pay a condolence visits to the little town that had come under several invasion by suspected Ansaru Islamic terrorists, said to have  disguised as Fulani gunmen.

The governor had come under criticism for allegedly refusing to visit villages in southern Kaduna where mass killings in the past two years of his government have attracted global media coverage.

Southern Kaduna is mainly populated by Christians with ethnic groups that make 51% of the demography of the state, according to the 2006 National Census.
Those who berate him over this are won’t to point out the haste with which he rushes to scenes of violence in Hausa/Fulani dominated areas that are essentially Muslims.

Perhaps to break away from that habit, Yero decided to pay a condolence visit to Fadan Karshi that day to commiserate with  victims of the town who make a small fraction of the estimated 150, 000 displaced persons, from the wider violence in Sanga, according to official accounts.

Fadan Karshi, Karshi Daji and Unguwan Ganye, three weeks back, came under another invasion in which 50 people were killed, scores wounded and homes burnt.
But the visit turned out to be a surprising one for Yero and his officials.

According to eye witness accounts from Fadan Karshi, where the governor was received at the palace of the District Head, the governor was embarrassed all the way into the place, mainly by protesting women, some half nude.

“The women were angry that after not less than seven attacks on their villages, in which not less than 300 villagers were killed since last July, the governor had not visited the place until a few months to the 2015 elections,” Mr. Bezard Wuyah, National President of Ninzom Progressive Youths, told reporters in Kaduna.

It was gathered that some of the women carried placards with messages such as, ‘Election time is near, come and deceive Sanga people again; The blood of our husbands would haunt the guilty; ‘Give us food, not scare us with soldiers’; ‘Will you treat your mother like this?’

Some more wailed and rolled on the rain soaked ground in front of the convoy, blocking it from moving, according to eye witnesses.

“The governor came with hundreds of soldiers, policemen, Roads Safety Corps, SSS, even prison guards. It was more of an invasion, not a condolence visit. Our mothers and sisters, who were expecting a sober, caring governor were furious when they saw it as a form of intimidation; so they  bared their minds on the negligence they had suffered since gunmen sacked their villages and rendered them homeless” one of the eye witnesses said.

“You will be surprised  to learn that the women were not organised. They were united in their grief and anger as neglected widows. They came from about seven tribes around. One of them lost her husband and four sons. They are starving with their children in sub-human refugee camps.

“But Sanga natives are law abiding and we are appealing to everyone to remain calm since the governor has come and seen the situation”.

Meanwhile, the Southern Kaduna Indigenes Progressive Forum, SKIPFO, conemned Yero’s visit to Sanga, saying it was a show of force and lack of empathy for the victims going by what it said was the huge number of armed security men that escorted him to the place.

SKIPFO,  in a press statement signed by Major George Nchok Asake (rtd), read:”It is no longer news that the state governor, Alhaji Mukhtar Ramalan Yero, has never deemed it necessary to pay any condolence visit to the affected  southern Kaduna communities that have had their people brutally killed. He has also not taken any action to protect these affected communities nor any other southern Kaduna community for that matter except those occupied by his settlers Hausa/Fulani brothers.

“Yero visited Fadan Karshi with a very large force of armed personnel. That was not a show of sympathy or condolence. It was pure show of state might to intimidate and suppress any dissension in view of his hate against our people. We kick against this show of naked power and we want to assure him that we shall take our revenge in the ballot box.”

But the Director General, Media and Publicity to Yero, Mallam Ahmed Maiyaki, responded in a text message to Sunday Vanguard on the visit, saying no one demonstrated against his principal.

The text read:” It is totally untrue. No demonstration took place. The people of Fadan Karshi are indeed saddened by the unfortunate incident in the area. And the governor shares in their grief. And as a good leader, his visit was to commiserate with them. His visit is not political.”