This is a strong call for restraint form all parties in lieu of the Kaduna Declaration of Tuesday June 6th.

I call on the Arewa Citizens Action for Change, Arewa Youth Consultative Forum, Arewa Youth Development Foundation, Arewa Students Forum, Northern Emancipation Network and any other groups listed in the declaration to calm the nerves down.

We understand that as was the case in November of 2015 when the northern groups gave the Igbo a similar declaration to quit in two weeks, these are reactions, albeit misplaced, in response to perceived provocation and inconvenience in the forms of protests, city shutdowns and sometimes harassment by secessionist Igbo groups in the South East that affect foreigners also living in their zones.

We also understand that the latest IpOB/MASSOB sit-at-home inconvenience and the northern Arewa groups’ response are all the result of Nigeria’s totalitarian Buhari-Osinbajo government that does not understand dialogue, referendum and prevention but only knows how to respond, crush and secretly mass bury.

We as a people must never retaliate or threaten to retaliate on others who are not directly involved in offenses against us or ours. This I have coined “Genocidal thinking.” The Igbo who live in the north are northerners. The only people you can rebuke and report to authorities are certified IPOB/MASSOB members if you feel they inconvenienced your family in the south. IPOB/MASSOB does not equal to Igbo and Igbo does not equal to IPOB/MASSOB. 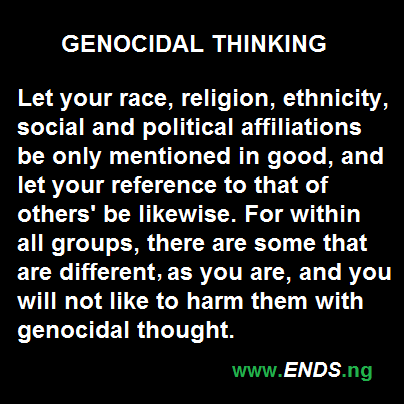 If Igbo secessionist groups ever happen to trigger mayhem in the south east, unaffiliated Igbos should be confident enough to safely run to the north, knowing that they can get refuge with you. This is how we must learn to behave as human beings and religious faithfuls. We also advice those in the east to be shelters for the innocent and victims caught in the cross-fire.

We the masses must never fight ourselves. The enemy is Goliath. We must #KillGoliath, the vulturous cabal system that has looted all our common wealth and caused us this pain, suffering and distrust. Keep your focus clear and kill Goliath the next political dispensation or through impeachment and recalls where possible before that. We need a revolution against Goliath, aka Nigeria PLC who owns the leading political parties and has again laid his stranglehold on the presidency, not to fight each other.

I hereby repeat my call to the Buhari-Osinbajo government to pay attention and respond to the calls of its people. The government cannot continue to ignore the agitations of a sizable population of youth in the southeast. They are not fools and they are not rats.

They have a right to demand self-determination. There is a true reason to agitate for restoration of regionalism as Nigeria was first established. The calls for referendum are a legitimate right under our democratic system.

As I stated in my article to Acting President Yemi Osinbajo on June 4th, by ignoring the calls from discontented members of the public we may not be preventing a war but promoting it, I quote:

“The agitations of the peoples of Nigeria must be listened to and hearkened to with the three Rs on the table: Referendum, Regionalism and Restructuring. Or rather than be the ones that prevented calamity, we may be the ones who promoted it.”

We can see tensions rising today.

We also call on human right groups and national elders to supervise the government’s response in Kaduna and as massacres and secret mass burials are not unexpected from precedence.