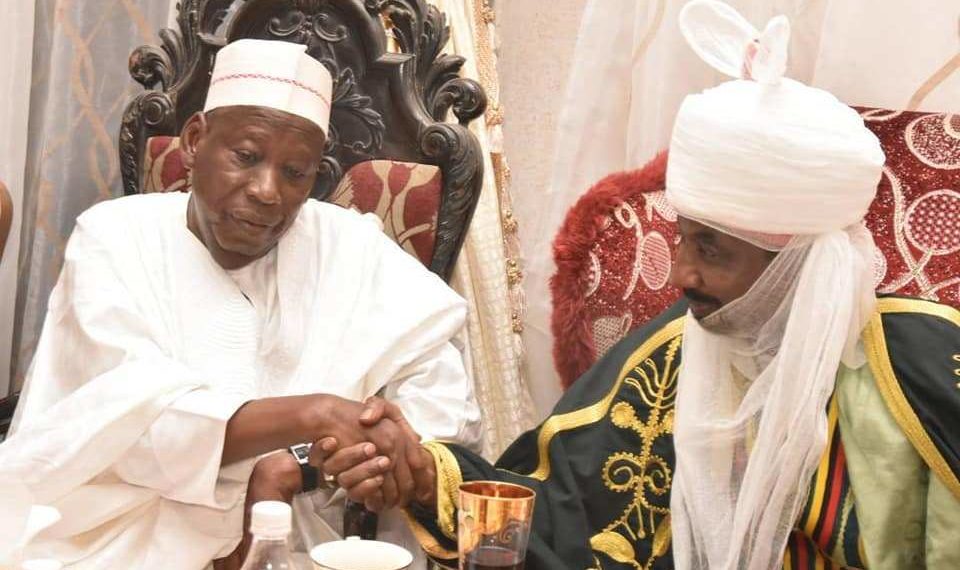 The Kano State Government has seized and demolished a plot of land worth N250 million belonging to the Emir of Kano Muhammadu Sanusi II and approved a peanut N4.5 million as compensation to the monarch.

There is crisis between Governor Abdullahi Ganduje and the emir, which culminated in whittling down the influence of the latter by creation of four additional emirates and first class emirs in Bichi, Rano, Karaye and Gaya.

A Kano High Court presided by Justice Usman Na’abba had last week nullified the law that created the emirates and the emirs, triggering fears that the judgement might trigger the simmering crisis.

A joint investigation by DAILY NIGERIAN and KANO FOCUS newspapers revealed that the property, located at Ibrahim Dabo Road, was demolished to pave way for the ongoing flyover and underpass bridge being constructed at the Dangi Roundabout area.

Our correspondents report that the seizure and subsequent demolition of structures within the land as well as the fence surrounding was personally supervised by the state Commissioner of Works, Engineer Muaz Magaji, on Friday, 15 November, 2015.

Officials of the state land ministry who spoke to our correspondents on the condition of anonymity said the emir purchased the 1.2 hectare land in 2010 at the cost of N200million.

According to them, the land was recently valued N250 million at commercial rate, but the state government insisted that payment would be made in accordance with the statutory land rate.

It was learnt that Mr Magaji, accompanied by a large group of armed thugs, led other officials of his ministry to Mr Sanusi’s land, personally mounted a Grade D9 bulldozer and demolished a section of the fence surrounding the land.

Our correspondents gathered that before Mr Magaji embarked on the demolition, he had asked the Emir to send a representative to witness the exercise—a request Mr Sanusi obeyed by sending the district head of Garko to represent him.

According to eyewitnesses, after the commissioner pulled down a sizeable portion of the monarch’s fence in the presence of his representative, he then reportedly ordered the waiting group of armed hoodlums to pillage the facility.

The witnesses added that Mr Magaji also turned around and directed the bulldozer to a collection of shop buildings beside the uncompleted bridge and knocked down a part of the structures, before also directing the thugs to take their “booty”, saying all compensations have been paid to the owners.

When contacted, the Chief of Staff of to the emir, Munir Sanusi, declined comment on matter, saying the emir had not given him clearance to speak on the matter. However, palace sources said the emir is yet to receive any payment from the government as compensation for the parcel of land, through which the road will pass through.

But in a phone interview with our correspondent, the commissioner claimed that the state government had paid compensation of to the emir.

“I can tell you he got the alert. For eight months, this issue has stalled the project, and this project is for public interest.“We were even hoping that the Emir would give us the land free to continue with the work. But since he did not give it to us, we decided to engage the service of valuers who valued it according to the statutory land rate because the government does not engage in commercial purchase,” he said.

The commissioner also confirmed that he personally mounted the Grade D9 bulldozer to pull down the said the structures.

He explained that the state government has also paid compensation to all other property owners whose structures were affected by the flyover project.

Similarly, Malam Muazu Shuaibu, the Secretary-General of Islamic Foundation—a non-governmental organization which owns the plots of land hosting the shops affected by the bridge project, also accused the state government of snatching their land without due compensation.

Mr Shuaibu explained that the shops were leased out to developers on a Build Operate and Transfer, BOT arrangement for a period of 20 years with the aim of generating funds to maintain the Umar Bin Khattab mosque.

He said officials of the state government had approached them when the bridge project started and told them that an assessment had shown that the work would affect their land.

“They sent valuers to make an assessment on what amount to give to each allotee. But we told them that they cannot proceed with the demolition until payments have been made to the beneficiaries.

Mr Shuaibu said as the Islamic Foundation and the property developers waited for the payment, he received a letter signed by Dahiru A’da’u, the permanent secretary of the Ministry of Works, asking for cooperation to acquire the land plots.

“Based on the need for the timely completion of this important project for the benefit of the teeming members of the populace of the state, I write to inform your good office that this ministry has scheduled to acquire the designated portion and continue with the execution of works,” the letter read in part.

“Accordingly, work shall commence in earnest on Friday, 15 November, 2019. It is in the light of the foregoing that I’m soliciting your usual cooperation on the successful, timely completion of the project, which will solve a number of traffic related problems in our great city.”

He further explained that immediately after he received the letter, he had an announcement that compensations have been paid and property owners were given 24 hours to evacuate the shops.

“I contacted the developers to know if any of them had received an alert but all of them said they did not receive alerts. In less than the 24 hours given, the commissioner came personally and started demolishing part of the shops and then asked thugs to take everything they want as booty, claiming that they had paid compensation,” he said.