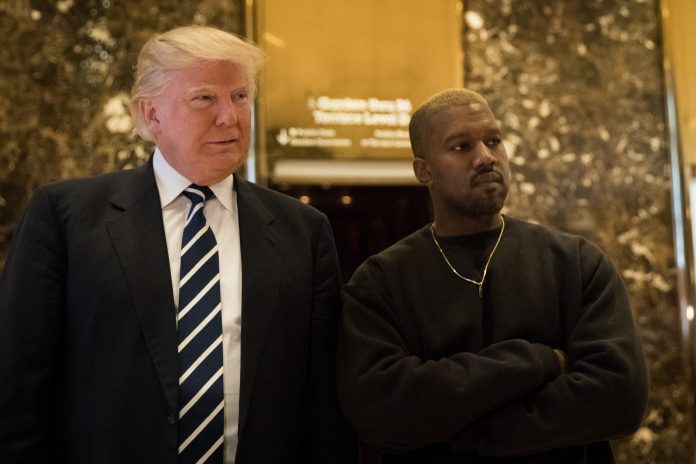 Kanye West has fired back at Donald Trump, describing the ex-president as a known liar after he called the rapper a ‘deeply troubled man’ following their controversial Mar-a-Lago dinner.

The hip-hop star, who has been airing a series of vile anti-Semitic rants and racist outbursts, was hosted at Trump’s Florida estate alongside white nationalist Nick Fuentes last week.

The dinner caused outrage even among Republicans that the 45th president was entertaining Fuentes, a self-described homophobic white supremacist, while West has been dropped by major brands for his bigotry.

After the backlash, Trump tried to distance himself from the meeting and said he was only ‘trying to help a seriously troubled man’ in West.

But the rapper, who dined last night with another of Kim Kardashian’s exes Ray J, along with Milo Yiannopoulos, has now hit back on the Timcast IRL podcast with Tim Pool, saying: ‘I would have never wanted to do anything that hurt Trump.

‘I’m on Trump’s side. Trump said things that hurt me. He lied about me, but I mean, he’s known for lying.

‘I went into the trenches for Trump … There is no one in my position that wore that hat.’

West, who later stormed out of the live interview, also revealed that alt-right commentator Milo Yiannopoulos had arranged the meeting with Trump and Fuentes.

After the dinner, Trump posted on Truth Social: ‘So I help a seriously troubled man, who just happens to be black, Ye (Kanye West), who has been decimated in his business and virtually everything else, and who has always been good to me, by allowing his request for a meeting at Mar-a-Lago, alone, so that I can give him very much needed ‘advice.”

He added: ‘He shows up with 3 people, two of which I didn’t know, the other a political person who I haven’t seen in years. I told him don’t run for office, a total waste of time, can’t win. Fake News went CRAZY!’