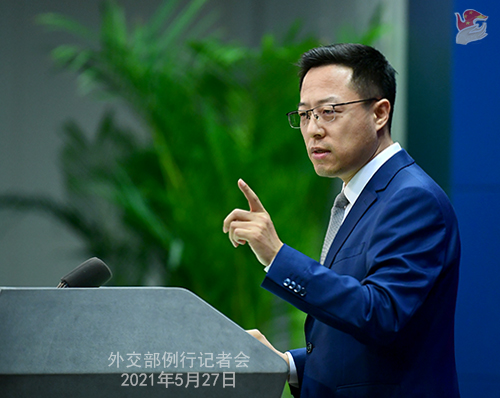 As the rift over the origins of COVID-19 virus develops between the US and China, the Chinese government last week while denying the lab leak theory, accused the United States government of among other things, being linked to the release of chemical weapons on Syrian rebels.

In his Press conference of May 27, 2021, Foreign Ministry Spokesperson Zhao Lijian said:

“I would like to stress one final point. The motive and purpose of the US-driven “investigation” relying on its intelligence apparatus is crystal clear. In fact, US intelligence has a notorious track record, as the world has learned a long time ago. Its masterpieces include the test tube of laundry powder cited as evidence for Iraq’s possession of weapons of mass destruction and the staged “White Helmets” video cited as evidence for chemical weapon attack in Syria. Former US Secretary of State Mike Pompeo even boasted, “I was the CIA director, we lied, we cheated, we stole. We had entire training courses. It reminds you of the glory of the American experiment.” How can anyone trust the findings from an “investigation” conducted by such an intelligence organ with no credibility to speak of?”

The attack was attributed to a sarin gas missile and once again brought the “White Helmets” Syrian defence group to global attention at the time for producing video of the aftermath. Russia continues to label the White Helmets a “terrorist organisation” and has accused them of ‘”provocation with the use of poisonous agents”, which could then be blamed on the Syrian government’ and organ trafficking among other activities.

Now Chinese officials without providing evidence are accusing theUS government of being linked to that attack, which would have made it a false flag at the time.

Following a u-turn in official policy amidst “more evidence” which had been in the public press since January, President Biden last Wednesday ordered U.S. intelligence agencies to “redouble their efforts” in examining the chain of events that led to the global COVID-19 pandemic.

Counter-attacking the US, Chinese Minister Zhao Lijian also re-highlighted the faulty intelligence about weapons of mass destruction that led to the US invasion of Iraq in 2003.

‘Speaking at a media briefing in Beijing, Ministry of Foreign Affairs spokesman Zhao Lijian said that President Biden’s call for more scrutiny of the still-disputed origins of coronavirus was politically motivated and showed that the United States “does not care about facts and truth, nor is it interested in serious scientific origin tracing.”’

Zhao further described US’ Fort Detrick in Frederick, Md., lab as “full of suspicion,” and said the United States needed to open it up to international scrutiny as well as opening up over 200 labs globally for inspection.

Minister Zhao Lijian went on to accuse the US of a conspiracy related to the recent “respiratory diseases of unknown etiology” and EVALI (e-cigarette, or vaping, associated lung injury (EVALI)) outbreak in Wisconsin and across the United States that peaked in Summer of 2019 right before the COVID pandemic.

“What secrets are hidden in the suspicion-shrouded Fort Detrick and the over 200 US bio-labs all over the world? In July 2019, there were reports on the unexplained outbreaks of respiratory disease in northern Virginia and on the subsequent EVALI outbreaks in Wisconsin. What’s hidden there? When will the US release detailed data and information on relevant cases? It owes an explanation to the world.”

“Origin-tracing is a serious scientific issue, and yet the US intends to let its intelligence service play a leading role in conducting the research. This only shows that facts and truth is the last thing the US side cares about. It has zero interest in scientific research, but is only seeking political manipulation for the purpose of scapegoating.

The US side has been clamoring for an “investigation” on the “laboratory leak” theory hyped up by the US with an ill intention and ulterior motive. I want to remind those in the US of two points. First, it is clearly written in the WHO-China joint mission report that “a laboratory origin of the pandemic was considered to be extremely unlikely”. Second, it is the US that has the largest scale and the highest number of bio-labs in the world with media coverage exposing the virus leak at the bio-chemical research base Fort Detrick. According to public information, Fort Detrick is inextricably linked with Unit 731, a covert biological and chemical warfare research and development unit of the Imperial Japanese Army that undertook lethal human experimentation during the Japanese aggression war against China. Shiro Ishii, who was in charge of this heinous unit, was also the bio-weapon consultant of Fort Detrick. When does the US plan to give an explanation in detail on the respiratory diseases of unknown causes in Northern Virginia in July 2019 and large-scale EVALI outbreaks in Wisconsin? Does the US side have the will and courage to invite WHO experts for investigation?”

The United States and China both sponsor research in the infamous Wuhan virology level 4 lab at the center of attention on Covid’s origins. Read more on that here.