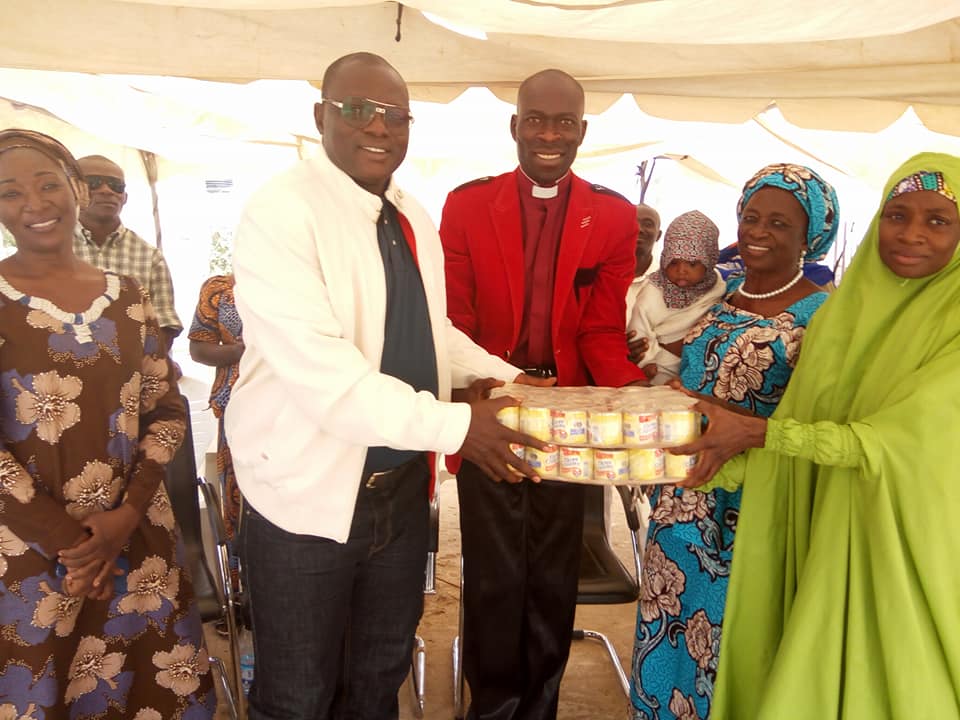 In solidarity to the 40 days fasting and prayers which is embacked by Christians world –wide,a Muslim woman has stormed southern Kaduna church this Sunday with the aims of sharing some cartoons of Tea-breaks Items to the church widows and orphans, in other to encourage them ,while calling on them to pray for peace and stability of the country.

Hajiya ramatu Tijjani who is a peace builder and interfaith promoter in Nigeria west Africa, says she came to the church with some package of Tea break Items which include Cartoons of Three crown and ,liptons”Yellow Lebel Tea” to share for the widows and orphans ,to strengthening them and support them in the daily fasting and prayers.

She pointed out that ,last year during the 6 weeks Lenten period , she bail out 10 Christians youth in kaduna convict prison ,so as to enables them go back home and do their fasting at home with friends,family,and other relatives,with joy and happiness like every other Christians round the world,and according to her this is a method of promoting peace building ,inter-religious Tolerance and better understanding among different faith base organization in Nigeria.

Ramatu added that supporting the widows and orphans with beverages and other Gift will give them more strength in devoting their total time in praying to Almighty God for the peace and unity of the country, because the purpose of Lent is the preparation of the believer for Easter through prayer, doing penance, mortifying the flesh, repentance of sins, almsgiving, self-denial.

Gift-giving is one of the good manners that maintains and strengthens relations between the giver and the recipient, and The importance of fasting cannot be over emphasizes.

She said that, Muslims round the world cannot forget how Pastor Yohanna Buru do always help Muslims “Destitutes & the inmate”with Food to eat during the 30 Day of the holy month of Ramadan, Bailing large number of Muslims youth prisoners out for the sake of Ramadan.

Ramatu also noted that,”we are worshipping One God Allah ,and both muslims and Christians are from one Family(brothers and sister), and both have their holy Books which are Bibles and Qur’an,Both believed in paradise and hell, so there for, we are all one family under One God.” 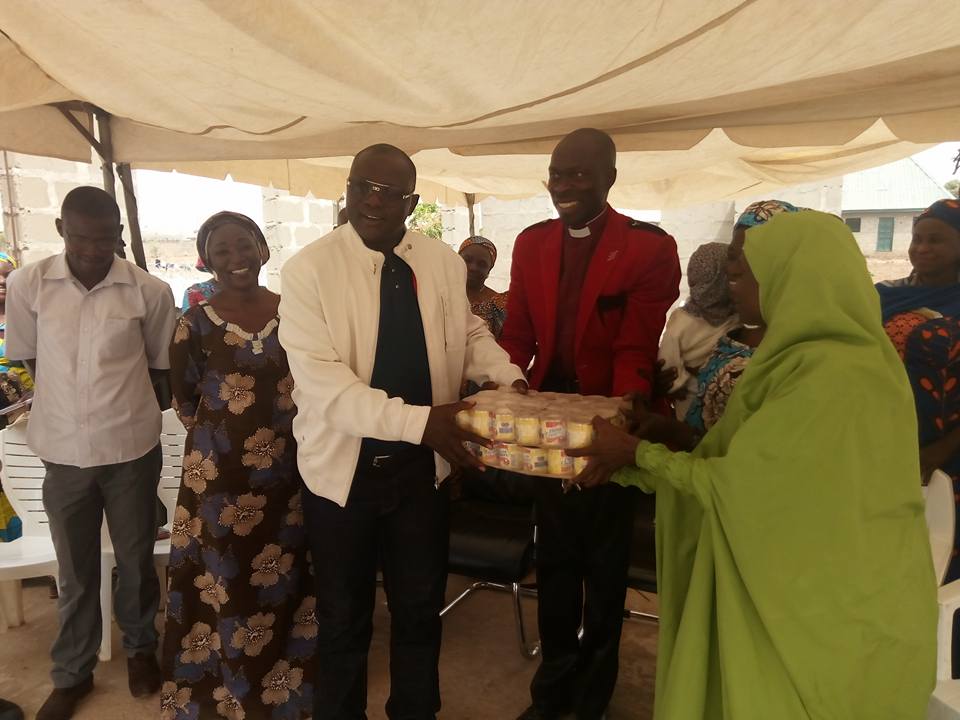 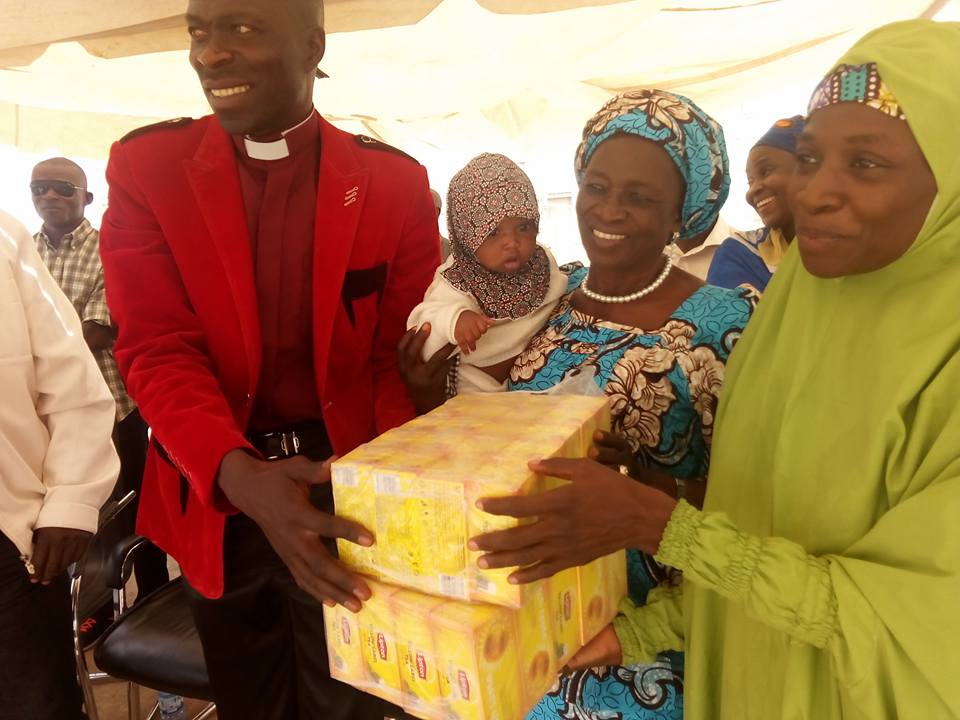 She says ,the impact of the previous ethno-religious and political crises in the state that claimed hundreds of lives and properties was a serious setback to peaceful co-existence in Kaduna and northern Nigeria at large, hence the need for clerics from both religions to preach sermons that foster unity and peaceful co-existence.

She further indicate that, she is also going to distribute the same gift to some Christians inmate in kaduna,and some part of Northern Nigeria,so as to enabled them devote their total time, in praying for peace and stability of the country.

She then called for the creation of institutes of comparative studies in the country, saying the institutes would promote better understanding, religious tolerance, forgiveness, reduce blasphemy tendencies and continuously preach peace and harmony between Muslims and Christians.

Additionally, She noted that there were more than 6,000 religions in the world, most of which were different from the literate Abrahamic religions (Judaism, Christianity and Islam) that many people think of when they hear the word “religion.” “In order to make statements or generalisations about religion, the concept of religion, rather than a specific religion or group of religions, we need to engage in comparative study of religions so as to reduce ethno-religious attacks and blasphemy,” she added.

“We need to change from Theoretical approach of peace to practical peace,we need more conference on interfaith in Nigeria and African.”

She concluded by saying , Some Nigerian Muslims have stand in solidarity with Christians on social media Platform by Twitting and posting on Facebooks, Instalgram, YOUTUBE, LinkedIn, Google+, Vimeo, Live-Streaming, Microblogging, Periscope, Blogging on what they will give-up until the completion of the 40days fasting, as a sign of total solidarity with Christians round the world” which is aim at boosting mutual respect, love, forgiveness, and encouraging peaceful co-existence in all African countries.

According to the Muslims on social media #NigerianMuslims4Lent. This is just to let Christians knows that Muslims are their best friends and brothers.

Receiving the Gift, the General Overseer of Christ Evangelical Intercessory Fellowship Ministry, Pastor Yohanna Buru, thanked Hajiya Tijjani for the gesture and urged other Nigerians to learn how to tolerate, accommodate and live in peace with one another irrespective of religious background.

Pastor Buru also called on all citizens to shun all issues that lead to ethno-religious and political crisis.

According to him, the church cannot forget the donation of 50 copies of Bible it received from a group of Muslim women in February 2016 during the international Inter-faith week; saying, this is geared towards promoting religious tolerance.

Buru says ,”the same woman donate dozens of chairs to the church and other utensils which are used for the cleaning the environment of the church,with the aims of promoting peace and Tolerance among Muslims and Christians”.

He stressed that it is time all preachers redoubled their efforts in teaching their followers the right ways and obey the teaching of the holy books so as to end the activities of extremists and terrorists hiding under religion.

Adding also that every year ,hundred of muslims join Christian in breaking lent in his house with other Christians and other traditional believers, according to him ,the aims is just to promote religious tolerance and better understanding.

Also responding, Reverend Titus Asiyaku said “It was surprising seeing Muslim woman performing miracle through peace mission,” while calling on every Nigerian to also find means of forgiving one another, in order to live in peace and harmony.