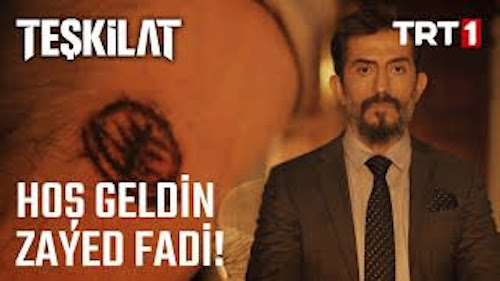 Turkish state-run television appears to have not gotten the message: Turkey and the United Arab Emirates are burying the hatchet – one of several Turkish efforts to reduce tensions in the Middle East and prevent them from spinning out of control.

TRT 1 is set to broadcast a new and second season of Teskilat (The Organization), a series allegedly endorsed by Turkey’s intelligence agency, that portrays it as fighting a covert war against a thinly disguised Arab adversary, the United Arab Emirates.

Known by his nickname Abu Fadi or Father of Fadi, Mr. Dahlan’s firstborn son, he often negotiates on behalf of the UAE in situations in which Prince Mohammed either prefers to maintain arm’s length or that further the former security chief’s Emirates-supported ambition to return to Palestine in a leadership role.

TRT released this week a trailer for the second season suggesting that it was moving ahead with the series but has yet to announce a broadcast date. Whether it does will say much about the solidity of the Turkish and Emirati efforts to contain their differences by focusing on economic issues.

The state-controlled Emirates News Agency (WAM) reported that the advisor’s visit was meant to “strengthen bilateral relations, especially economic and trade cooperation and investment opportunities in the fields of transportation, health, and energy.”

TRT’s decision on whether to broadcast Teskilat’s second season is likely to serve as a bellwether for the fragility of other efforts to contain the Middle East’s deep-seated disputes, including those between the UAE and Qatar as well as Saudi Arabia on the one hand and Turkey and Iran on the other.

The apparent Turkish-UAE approach of focusing on trade and investment while freezing geopolitical differences is a formula that has yet to prove workable in the Middle East, particularly given that regional disputes are often inter-connected.

Syria is one such flashpoint among many. The UAE has led efforts to restore the legitimacy of Syrian President Bashar al-Assad’s regime by engineering its return to the Arab fold. The League of Arab States suspended Syria eight months into the country’s brutal civil war on Turkey’s doorstep.

Turkish troops in northern Syria, dispatched to ensure that no Kurdish entity emerges on the Syrian side of the border,  have repeatedly clashed with Mr. Al-Assad’s military.

To succeed, the UAE, which reopened its embassy in Damascus in 2018, needs the backing of Saudi Arabia. Saudi Arabia has suggested that it in principle backs the UAE effort by sending its intelligence chief, Gen Khalid Humaidan, to Damascus in May to discuss a reopening of the Saudi embassy in the Syrian capital.

The problem is that Saudi Arabia is seeking to leverage its backing in its stalled Iraqi-mediated talks with Iran. Iran is, together with Russia, Mr. Al-Assad’s main backer. Iran has so far rejected a Saudi suggestion that it would re-establish relations with Syria in exchange for Iran pressuring Houthi rebels in Yemen to genuinely negotiate an end to the 6.5 year-long war that has ravaged the country.

The Eastern Mediterranean is another flashpoint in which Emirati geopolitics combine with economics to compete with Turkish ambitions. Israel finalized this week the sale to the UAE of a 22 per cent stake in its Tamar offshore natural gas field for US$1.1 billion.

A member of the Eastern Mediterranean Gas Forum, which groups Israel, Egypt, Israel, Greece, Cyprus, Italy, Jordan, and the Palestinian Authority but not Lebanon and Syria that have claims of their own, the UAE hopes to export oil to Europe through an Israeli pipeline that would link it to the ports of Eilat on the Red Sea and Ashkelon on the Mediterranean.

For its part, Turkey has signed an agreement with Libya that carves up the eastern Mediterranean into exclusive economic zones for each country. The zones overlap with claims by members of the Forum as well as Lebanon and Syria.

In the world of Teskilat’s conspiracy-driven plot, Syria is one battlefield in which a secretive and mysterious unit of Turkey’s National Intelligence Organization (MIT) battles Mr. Fadi’s Organization. Mr. Fadi’s Organization struggles in Syria to escape the superiority of Turkish drones, has aligned itself with the Islamic State and the Kurdish Workers Party (PKK) to strike at targets in Turkey, and cooperates in Europe with the far-right and neo-Nazis to attack Turks in Europe.

The series builds on allegations by members of Mr. Erdogan’s government and ruling party that the UAE had funded a failed 2016 military coup. Turkey has issued an arrest warrant for Mr. Dahlan for his alleged role in the coup and has offered a reward of US$1.2 million for information that leads to his arrest.

The UAE at the time, despite already strained relations with Turkey, persuaded the six-nation Gulf Cooperation (GCC) that also includes Saudi Arabia, Qatar, Kuwait Bahrain and Oman to designate the movement of Fethullah Gulen as a terrorist organization. At the same time, the UAE expelled two Turkish generals accused of having been part of the coup. Turkey has said the Gulen movement was behind the attempted military takeover.

Broadcasting Teskilat’s second season would likely be seen by the UAE as particularly provocative after authorities in Dubai, in a goodwill gesture,  briefly detained Sedat Peker, an alleged mobster with links to the Turkish deep state, to demand that he stop posting online videos accusing senior government officials and businessmen of corruption. The videos went viral and were long the talk of the town in Ankara and Istanbul.

Home to businessmen and deposed leaders who have escaped corruption charges, the UAE has so far refused to respond to a Turkish request to extradite Mr. Peker.

Given the UAE’s willingness to grant refuge to the fallen high and mighty with no questions asked about the source of their wealth they had already parked in the country or brought with them, it may be easier for Turkey to cancel Mr. Fadi than for the UAE to return Mr. Peker.

The UAE’s latest refugee, ousted Afghan President Ashraf Ghani, has denied allegations that he fled his country with US$169 million in cash.

The replacement of Mr. Ghani by the Taliban coupled with the role of Qatar as a major diplomatic and logistics go-between in the aftermath of the US withdrawal from Afghanistan and the role Turkey plays, together with Qatar, in getting Kabul’s airport operational again may be one reason that the UAE is seeking to accelerate its rapprochement with Ankara.

Doing away with Mr. Fadi is low hanging fruit for Turkey even though Teskilat’s popularity may spark something of a domestic backlash on social media.

It would, however, not remove the major geopolitical and ideological differences with the UAE that inevitably will colour efforts to focus on trade and investment.

The current effort to improve relations contrasts with failed past attempts when Turkish rejected Emirati offers of investment in exchange for the expulsion of members of the Muslim Brotherhood and changes in Turkish regional policies.

The UAE likely takes heart from Turkey’s recent crackdown at Egypt’s request on Egyptian opposition television broadcasters in Istanbul to further a rapprochement between Ankara and Cairo as well as Mr. Erdogan’s indication last week that he would welcome Emirati investments.

Turkish journalist and analyst Fehim Tastekin asserted however that plans for cooperation with Iraq presented by Turkish Foreign Minister Mevlut Cauvusoglu at a recent regional summit in Baghdad signalled “Ankara’s intent to maintain its interventionist posture.”

Mr. Cavusoglu proposed a motorway and railroad that would link northern Syria to Bagdad in ways that would circumvent Kurdish dominated areas of northern Iraq, complicate the movement of Iraqi and Syrian Kurdish fighters, and facilitate Turkish access to the city of Mosul.

“The problem is always the discrepancy between what Turkey promises and what Turkey does. Erdogan will have to prove this time that things are different. That could prove to be a tough proposition,” said an Arab diplomat.