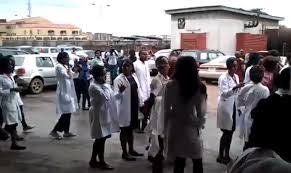 We are writing to inform you of the injustice currently been meted out on us.

In February this year, we received appointment letters from the Ministry of Defence, asking us to work with them at their various military hospital establishments. Having already endured gruesome conditions during the examination and interview process for the job, we considered ourselves very lucky and successful candidates as we enthusiastically rushed to collect the appointment letters and commenced work accordingly.

Ever since our appointments, we have dutifully carried out our assignments for eight months. But to our uttermost dismay, the Ministry of Defense-our employers have bluntly refused to pay us our salaries. In this light, we have written numerous letters to the relevant authorities, begging them, we have cried, dialogued, but they have constantly turned a deaf ear to our plea.

When we visited the Ministry of Defence Head Quarters in Abuja, sometime in August, we were told that they do not have our salaries because our payment was not reflected in this year’s budget!

Mr. President, you will agree with us that it is very ludicrous for an employer to advertise vacancies for positions in the dailies, conduct interviews and subsequently hire employee only to tell them eight months after working that their salaries was not included in the yearly budget.

Sir, we sadly say that this nefarious act has been occurring repeatedly for many years now. We learnt that the Ministry of Defence is in the habit of treating interns like slaves; they hastily employ them and then keep their salaries for months, when the interns become frustrated and begin to clamor for their wages, they are punished by a slash in the salaries or at best receive only half of their one year pay.

Your Excellency sir, we have no one else to turn to, because the culprits in the Ministry of Defence have become embolden by their ability to get away with this callous acts for years. An official from the ministry said this to us, and we quote “What can you (the interns) do if we decide not to pay your salaries? After all, you are ordinary interns, no one cares about you!”

Sir, we are writing to you because as our leader, we know that you have invested interest in the development of youths in this country. This is why on the 11th of October 2011, you launched the youth enterprise with innovation in Nigeria scheme to harness the creative energy of the young people in Nigeria.

Unfortunately Mr. President, there are some individuals in your administration that do not share the same goals as you do. They believe that they can constantly harass, intimidate and disenfranchise youths in this country, and they continue to do this with great impunity. Sir, as a man of integrity, we are hoping that you would not stand for this. That is why we are aptly bringing it to your notice.

What saddens us most is that even when the Nigerian Medical Association (NMA) was on strike, and there appeared to be halt in the provision of medical services in this country, we were still working tirelessly! In the peak of the Ebola medical fiasco that nearly swallowed the nation, we were relentless in our work. Without pay, we showed up to work every morning to care for our patients.

Sir, in all fairness, we can say that we did our part to stifle the spread of the Ebola virus within the shores of our country. And for this great feat what have we asked for? Is it a rise in our pay? Is it a well deserved increase in our hazard allowance? Is it a medal of honor as a national hero working during a time of disaster? No sir, what we have asked for instead is that our basic salary be paid. We wish to be paid for the work we have done, nothing more!

Mr President, not only are we fresh graduates that are newly experiencing what it is like working in the civil service, a number of us are married, we have children, we are uncles, aunts, we have dreams, aspirations and lots of responsibilities. Ironically, the nonpayment of our salaries has made it practically impossible for us to meet our numerous responsibilities to ourselves, families and the society.

Sir, we are hungry, our children are hungry, and it is disheartening to see that we have gradually become a burden to those that truly love us. They have being of great assistance for eight months already, we cannot continue to mount tremendous financial burdens on them. Please we need your help, we need it urgently.

Your Excellency, you have repeatedly said that theft is not corruption. Indeed, we totally agree with you. Since we cannot imagine that the culprits of these nefarious acts in the Ministry of Defence are only corrupt. How can one keep the salaries of their employees for months, abandon them, make them work without pay, then clad yourselves with the cloak of corruption? No, they must be thieves!

Even though it is clear that the ministry is to be blamed for the nonpayment of our salaries, we are forced to also sadly inform you of the uncanny part played by the commanders in the respective hospitals of primary posting. These are people we expect to be more sympathetic to our plight, because they are the ones we work for; the direct recipient of our services. But they have resulted to victimizing us. They have repeatedly threatened us; they said they would read out the armed forces act to us.

We were threatened that if we continue to ask for our salaries, our programs will be extended. One commander actually threatened not to sign us out of the program. In all these, we believe that the greatest injustice was the wrongful eviction of the interns working with the 68th Army Hospital, Lagos without prior notice.

Mr. President, we are not slaves, this is our country. What crime have we committed to be treated this way? Except that we opted to serve and are still serving our great country, Nigeria. We have heeded to the words so often recanted in our national anthem, “Arise oh compatriots’, Nigeria call obey”.

Here we are working for our nation, giving our best. But Sir, to allow this mayhem to go unpunished is tantamount to allowing the labor of our heroes passed to be in vain, God forbid! Our Holy Book admonishes that “a laborer is entitled to his wages” therefore Sir, we should not be punished for asking for our salaries.

It is our total confidence, that you will speedily do something about this grave injustice. God bless you as you do. God bless the federal republic of Nigeria.