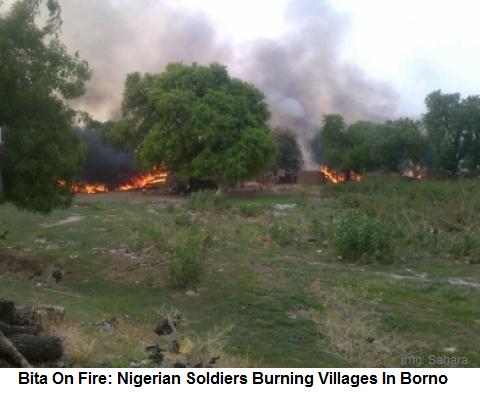 Frankly put, when millions of good citizens are forced to run from and be displaced by a handful of terrorists, it implies one of two things: either someone at the head of that society is callous – benefiting from and supporting this successful extermination – or the leadership is clueless, without sense to embark on the necessary steps to protect the people.

Boko Haram has been killing and displacing the farmers of the north, Borno most especially for four years now, and the Kashim Shettima State government and Goodluck Jonathan administration have either been callous or clueless in response. The Borno matter is not limited to the President of Nigeria; we must be candid in our analysis in the best interest of the people. The State of emergency was just announced in May last year and up until that time, the Governor of Borno either had no clue how his people should defend themselves or was callous about it. The governor of Borno State still receives a humongous security vote which means he still has a responsibility in the security of his people despite the State being in emergency.

The Situation and Options

It can be recollected that the governor of Zamfara State, when he supposedly feared for his people, sought permission from the Office of National Security Adviser, ONSA, to import arms to arm local vigilantes (though a rift later caused the ‘seizure’ of the arms according to public details). A ChannelsTV report has it that many governors use their private jets to import arms into Nigeria today. In many or most of these cases, governors are either, with permission of the Federal government or illegally, importing arms to be given to criminal gangs in their States – to bad people, in States that have no serious terror threat. The Borno State governor’s predecessor, an individual popularly known as SAS, is variously certified to have armed Boko Haram terrorists, then called Ecomog and later known as the ‘Nigerian Taliban,’ and turned this initial radical group into the full fledged insurgency and menace they are today. Despite such evil, this governor is a friend to all implicated politicians and has not been arrested by the Goodluck administration. He was reportedly arrested in neighboring Cameroon for his role in financing terror; this was when he made the notorious statement, ‘I did not know you Cameroonians are like this,’ and treacherously, Nigeria even went to free him.

Today, thanks to the illegal arming of the worst of mankind in Borno, the good people of the State have a deadly problem. They are under daily attack from Boko Haram terrorists who are undisputedly pushing an agenda for population ‘control’ in the north and are running a program to displace farmers from their fertile land for the use of whoever is behind the group, local or foreign. Nothing is being done despite this constant unchecked displacement which numerous reports – the most recent on BBC Hausa last week – have described the nation’s security services as having a hand in. The BBC Hausa report last week which had an alleged soldier describing how during the Gamboru-Ngala massacre in which over 300 villagers were killed, the soldiers who were as many as 200, close by and able to deploy, watching as only 50 Boko Haram terrorists destroyed the town; the soldier further alleging that a military chopper that should have shot the terrorists’ tank, hovered above, rather covering the terrorists. This inadvertent arming and aiding of terrorists by the State and disarming the locals, is either callousness and complicity or cluelessness.

Nigeria lacks a rapid response system. Police and army responses to distress calls take over 8 hours or never come at all. It is a crime against humanity to leave citizens in such proximity to harm without any form of security plan for them to be protected or protect themselves. This is State terror. The President of Nigeria with his entire security apparatus cannot visit Chibok, the town where over 200 Nigerian school girls were abducted in April, yet he leaves citizens in such a ‘dangerous’ zone without either evacuating them or providing them with some form of protection or allowing and supporting them to protect themselves.

The civilians in the affected areas were disarmed by the Joint Task force and left as sitting ducks waiting to be slaughtered. Boko Haram simply chooses which village to attack next, goes in, kills and burns all in sight and leaves or stays, successfully fulfilling its agenda against the northern farmer that the State governor and Abuja are inadvertently supporting. Citizens have recently used all they can get, including local Dane guns and spiritual warfare to defend their communities, scoring some of the greatest victories against the terrorists’ sect in recent times that the nation’s army made seem impossible. The citizens have been begging loudly, as seen in global publications, for the government to support their effort and give them the right to bear arms and better arms than their handful of local two-shot shotguns so they can protect their communities and go after the terrorists; but in sheer treachery and condemnation of the people to their death in the hands of ‘military supported’ Boko Haram, the State and federal government have refused to enable these vulnerable communities to defend themselves from the onslaught. In some instances as few as twenty terrorists overrun villages of thousands, as happened in Adamawa last week. How can 20 overrun thousands?

When it comes to the burning down of the properties and homes of villagers, the Nigerian army itself actually burns down as many villages as the terrorists under the guise of making these villages uninhabitable for the terrorists. This ‘tactic’ can be read as a top level agenda to actually force all farming communities out of the north east. Otherwise it is unheard of for a military within a nation to resort to burning down habitations where villagers have been displaced as a means of ‘stressing’ and ‘depriving’ terrorists. SaharaReporters gave an exclusive report last week, on one such instance where the Nigerian army went to set Bita village on fire. The image appears above.

The governor of Borno recently inadvertently acknowledged the wicked cluelessness or callousness of the political regime. He said, that if he confessed, ‘heads will roll.’ This either suggesting him knowing the sponsors of the terror, or him knowing the callousness and cluelessness of the security response to Boko Haram terror, and the heads responsible for the genocide of thousands of Nigeria’s poor farmers and traders in Borno and the north at large.

Boko Haram just took over another village in Borno and according to the PremiumTimes reports, even hoisted their flag over it. We the people must act not today, but yesterday against a government that is complicit in our deaths and for a people, a farming community that is desperate, with nowhere to turn.

Again, we call on all international players to raise alarm at the government War Crimes and declare strong sanctions on the current administration, both State and federal for embezzling funds for security, failing to provide security for the people and failing to either evacuate them or support them with the arms to defend themselves.

If the people will not be given the right to bear arms to defend themselves, by this political administration which arms the thugs and terrorists that are exterminating us, we urge the people to get whatever weapons they can and defend themselves from any perceived enemies, State-appearing or terrorist.