I am no Shiite. As the son of a Sunni Muslim scholar, I have irreconcilable theological differences with Shiism. But I would be remiss (and betray the true meaning of my name, which signifies one who distinguishes truth from falsehood) if I failed to speak up in the face of the heartrendingly murderous persecution of Shiite minorities in northern Nigeria.

Shiites have had run-ins with Nigerian law enforcement agents for as long as I can remember, but the lamentably cold-blooded mass murder of hundreds of unarmed, defenseless members of the group by the Nigerian military in Zaria on December 12, 2015 took the cake. I was numb with horror for days on end in the wake of this bloodcurdlingly brutal mass slaughter of fellow human beings whose only crime was that they constituted themselves into a nuisance.

Report of the government-appointed “Judicial Commission of Inquiry into the Zaria Clashes” said at least 348 Shiite Muslims were murdered by the Nigerian military, but members of the Islamic Movement in Nigeria said nearly 1,000 men, women and children were butchered by the military. The group’s leader, Sheikh Ibraheem El-Zakzaky, was shot several times, including in the eyes, publicly humiliated by being paraded half-naked in a dingy wheelbarrow, and has been in detention for nearly a year—in addition to the insensate murder of his wife and children and the destruction of his home.

That was unmentionably horrific. But what was even more horrific was the complete absence of expression of outrage or even a tinge of moral compunction from Nigerian authorities.

Not even President Muhammadu Buhari who is always quick to issue statements of solidarity and sympathy when even a single soul dies in a terror attack or a natural disaster in the West deemed it worth his while to express sympathy over, much less condemn, the heartless and unwarranted mass slaughter of his own citizens by soldiers he is commander-in-chief of.

When the president was compelled to speak on the mass murder during a presidential media chat on December 30, 2015, he seemed to countenance it. “How can you create a state within a state?” he said. “There are some teenagers I saw stoning Generals [The commission of inquiry set up to investigate the crisis said this wasn’t true]. I don’t want to talk too much about it… The people of Zaria came out openly to talk about what they have been going through in the last 20 years under the group.” Unbelievable. Just unbelievable!

No one denies that Shiites, particularly in Zaria, are an intolerable irritation. They habitually block traffic and make life a living hell for road users. But that is no justification for the callous murder of their members. There is no proportionality of justice in killing people because they blocked traffic. In any case, Sunni Muslims, Christians, and other cultural groups in Nigeria also habitually block traffic for Juma’at prayers, Maulud celebrations, crusades, “owambe” parties, etc.

But an even more insidious phase in the persecution of Shiites has just started. Late last week, Kaduna State governor Nasir el-Rufai, who is shaping up to be one heck of an intolerant, hypocritical pocket Nazi, issued a proclamation banning the Islamic Movement in Nigeria. This is the same group whose support he studiously courted in the run-up to the last general election and for whose sake he once called the Nigerian Army “genocidal.” “GENOCIDAL JONATHANIAN ARMY KILLS ONCE AGAIN: My sons were taken alive, then summarily executed by soldiers via Premium Times,” el-Rufai wrote in a July 26, 2014 Facebook status update. 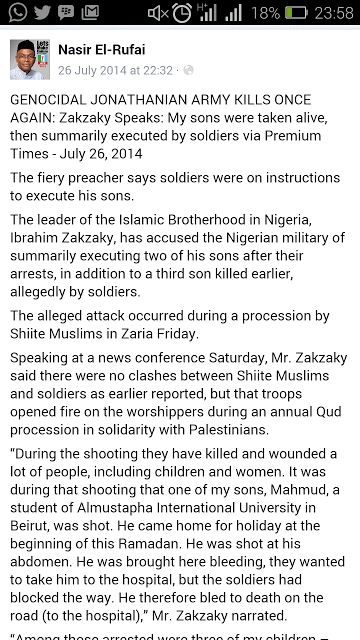 Look at this scenario and tell me if it’s not an open invitation to another avoidable insurrection: A government-backed army murdered hundreds of men, women and children of a religious minority group in cold blood for merely provoking soldiers and their head honcho. The army then shot, humiliated, and indefinitely detains the leader of the religious group. In spite of this extreme provocation, members of the group resist the urge to retaliate or take the law into their own hands, but are prevented by authorities from even exercising their constitutionally guaranteed right to peaceful protest. Finally, government hands down a fascistic fiat banning the organizational platform of the religious minority group with the threat of “a penalty of imprisonment for seven years or a fine or both for any person convicted for belonging to an unlawful society.”

That, right there, is the textbook definition of persecution, of fascistic persecution. History won’t be kind to anyone who endorses this vicious rape of a people’s liberty of conscience and right of association. But if you don’t oppose this injustice against a religious minority group because of the violation of its democratic rights, you should at least spare a thought for the short- and long-term consequences of this monstrous governmental oppression.

We are witnessing the making of a Shiite version of Boko Haram. When you inflict incalculable physical, emotional, and symbolic injury on a small but determined and largely peaceful group and then proceed to proscribe the group or jail its members for insisting on exercising their liberties, you risk a violent pushback. The English say “(even) a worm will turn,” which means even the meekest and most docile person will fight back if you push him so hard that he has nowhere else to escape to.

A dangerous corollary to the proscription of the Islamic Movement in Nigeria is the unwitting authorization of jungle justice against Nigerian Shiites in northern Nigeria. That’s why scores of Shiites were murdered last week by remorseless, bloodthirsty mobs in several northern Nigerian cities.

One of life’s enduring existential ironies is that most people will rather give up their life than give up their way of life. That’s why laws that seek to legislate people’s way of life never work. No legislation, imprisonment, or murders will stop the existence of Shiites—or any religious group. Repressive tactics historically only solidify groups and drive them underground from which they engage the state—and the society at large— in tediously protracted guerilla warfare. That’s how Boko Haram emerged.

This is one avoidable self-injury we can’t afford to inflict on ourselves at this fragile moment in our life as a nation.

This isn’t about Shiites; it’s about respect for the basic liberties of all people. Shiites are at the receiving end of fascistic repression today; you, yes you, could be next tomorrow.

A society’s health is judged by how well it treats its minorities, it vulnerable members.