A mystery creature resembling those aliens in sci-fi movies has been found in Panama. This unidentified creature looks somehow like a relative to the Montauk Monster, another unidentified animal that was found in Montauk, New York in 2008.

This discovery could somehow change your perception of the existence of alien. Well alien in the sense that it is alien to human but not necessarily to the planet.

The animal or alien was discovered by a group of teens while they were playing near a cave. They saw the alien like creature starting to come toward them.

Afraid as they are, they started throwing rocks on it until it stopped to respond. They then threw the creature into a creek and left. Some time later they came back to take some snapshots of it and informed the authorities. 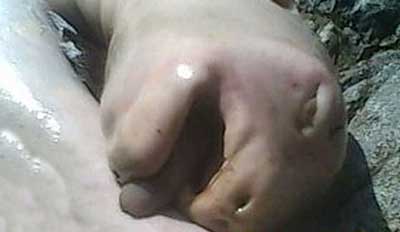 The creature for sure looks like those in our movies but then those aliens in our movies are “shape” created by the imagination of humans based on our own physical appearance.

Zoologists are examining this creature right now and are still amazed! From the first report made public it is said that this could be a dead fetus and the teens in fact only discovered it lying down there and invented the story about throwing the rocks! As we know how ‘careless’ they can be at the age of 12 and 13!

Another possibility is that this could be an animal who lost all its fur and was only running for defense. This 2nd explanation seems more reasonable as the creature was hiding and living in the cave. source