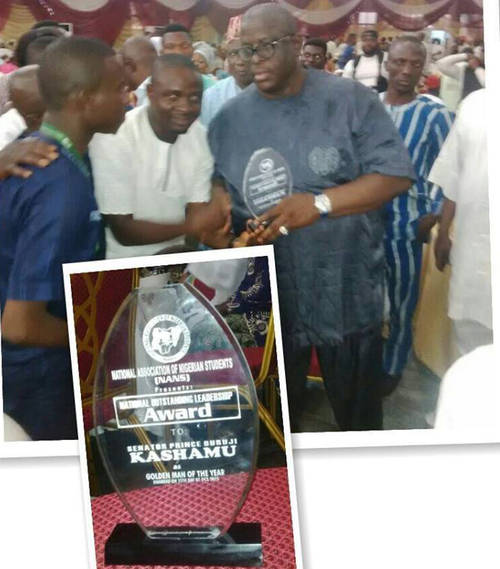 Some activists and social critics on Monday slammed the National Association of Nigerian Students for naming the senator representing Ogun-East senatorial district, Buruji Kashamu, as the ‘Golden Man of the Year’.

The National President of NANS, Tijani Usman, had presented the award to Kashamu last week for his ‘untiring, exemplary and compassionate leadership style’.

While presenting the award to Kashamu in Ogun State,Usman had said, “We decided to honour Senator Kashamu because we know that he is neither the richest businessman nor politician in Nigeria, yet we constantly hear of his philanthropic gestures to Nigerians of all shades and colours, especially the less-privileged.”

“We are fascinated at his large-heartedness even in the face of needless distractions. We reckon that if all wealthy Nigerians are like Senator Kashamu, the country will be a better place for us all. That is why we decided to encourage him by giving him this award.”

However, constitutional lawyer, Prof. Itse Sagay, told our correspondent that the decay in NANS was a reflection of government and society.

Sagay, who is also the Chairman, Presidential Advisory Committee on Corruption, said the gesture of NANS was similar to the vote of confidence passed in Senate President Saraki by his colleagues despite his ongoing corruption trial.

He said, “Our body polity has been affected by a disease. I am not surprised that students can call Buruji Kashamu their hero when senators passed a vote of confidence in Saraki because he is undergoing a criminal trial. Of course, I know Saraki has not been sentenced but this disease has also infected students.”

In his reaction, human rights activist, Mr. Festus Keyamo, said, “This is unfortunate; NANS has been destroyed. That is all I can say.”

Also speaking, a Lagos-based lawyer, Ebun-olu Adegboruwa, who was also the Student Union President at the Obafemi Awolowo University in 1992, told our correspondent that NANS goofed by giving a controversial politician an award.

He said, “The situation of Nigeria demands that students should be progressives who work in the interest of the masses and should be concerned about their future.

“I don’t know what he has done in furtherance of education and democracy in Nigeria. Given the controversies surrounding his sojourn in America as well as his cases in London and Nigeria, I think NANS should have waited till these cases had been concluded before giving him that award. During our time, we never did such.”

An activist, Mr. Lanre Arogundade, who was the NANS president from 1984 to 1985, told our correspondent that NANS had become commercialised and is now the property of the highest bidder.

He said during his time, NANS only gave awards to deserving Nigerians. He recalled that NANS bestowed the title of the ‘Senior Advocate of the Masses’ on the late activist, Chief Gani Fawehinmi (SAN).